Blackpoll Warblers arrived on Monday this week and I was able to get a picture of both a male and female. Male blackpolls (top photo) are one of those species that look extremely different in spring and fall. He is beautifully adorned with an extensive black cap and black streaking on its breast in spring but after molting resembles his female counterpart in fall (dull-colored second year female in bottom photo). 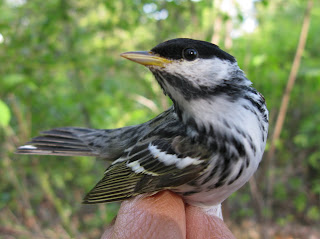 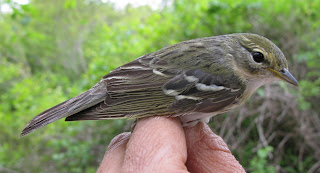 Here is a comparison photo of two older adult male/female blackpolls posing nicely for their picture in spring. 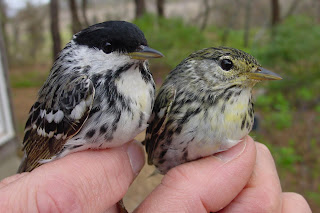 Sometimes I’m lucky and capture two birds of the same sex and species but different ages so I can do a side-by-side comparison. Below are two male Yellow Warblers caught on Tuesday. The bird on the left is a second year male (born last year) and the more brilliantly colored male on the right is an older bird. 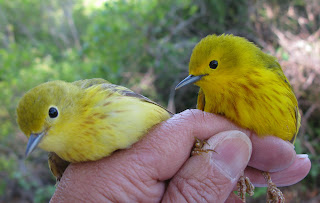 Additional warbler species captured this week were Black-throated Green Warblers, one of our smaller warblers. There were quite a few around on Monday as I could hear males singing their distinctive songs, “trees, trees, murmuring trees,” or “zee-zee-zee-zoo-zee!!!” 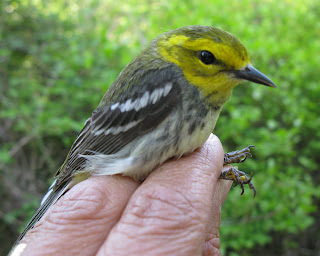 Monday and Saturday were the two best days of the week for numbers and diversity. I banded 4 Ruby-throated hummingbirds on Monday, quite a few considering we typically only get 1 or 2  in the nets for the whole spring season. Two groups of school children had the opportunity to see one of them up close. I had a nice male showing off his gorgeous red gorget. 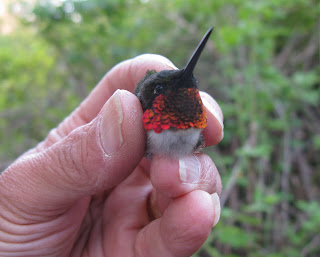 Flycatchers can pose a challenge for bird banders. There are quite a few varieties that resemble each other. We take numerous measurements, comparing different flight feathers including length and shape, leg color, and body plumage color before we make our determination. Monday I was delighted to capture this Traill’s Flycatcher. 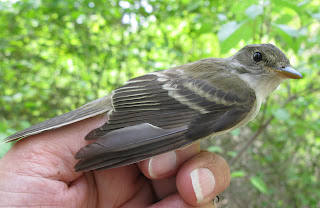 In reviewing these photographs I’m noticing while the birds are lovely, my manicure habits leave something to be desired! Oh well, as an “outdoorsy” type of gal, unfortunately my nails are the last thing I think of, so I must apologize. Focus on the birds please!
We have a table set up on the island where we spend the morning processing birds we capture. On Monday I returned to the table after a net run and my banding dog, Gracie, became quite agitated and barked at something in a tree. When I looked up I saw a Turkey Vulture quite close to us. It’s not often one is able to get close to these birds and the few times I have I’m always amazed at how really big they are! Its massive wings were evident when it took off. I thought it was odd to be there, but didn’t think too much about it again until the next day. Ooo-eeee, what a smell!! I’m thinking dead deer. Actually I’m hoping dead deer and not something more sinister. The vegetation is so thick that it was impossible to look for the source. It was not a pleasant day trying to process the birds on Tuesday, but I did see two vultures circling overhead .Wednesday was a rainy day with no banding. By the time I returned on Thursday the smell had disappeared. The scavengers thankfully did their job!

Speaking of Gracie, you can learn more about her duties on my website: www.wingisland.org/volunteer.htm. Gracie’s been banding with me since she was a pup. Her favorite bird is, take a guess, catbird! She really has no interest in other birds. Here she is intently watching bander Gretchen Putonen weighing a catbird. 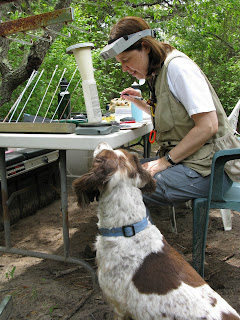 The highlight of the week has to be a bird I’ve been waiting a long time to band. This primarily southern warbler showed up in the nets on Saturday. I was so thankful I had Gretchen with me to share this special bird. A KENTUCKY WARBLER!! 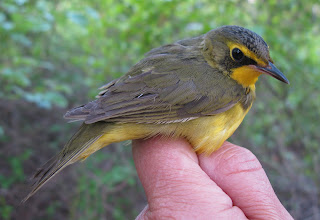