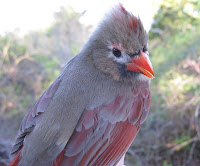 Wed 28 April and Fri 30 April
It was almost pointless to open nets on Wednesday as the wind howled over much of the island. We had a few nets that weren't blowing too hard but we ended up closing early with only 5 birds captured. Friday wasn't as bad (12 birds)  and we had a couple of interesting captures. One was a recaptured cardinal exhibiting leucistic feathers around her eyes. She was at least 7 years old and we've captured her almost every year since 2004 with normal plumage. 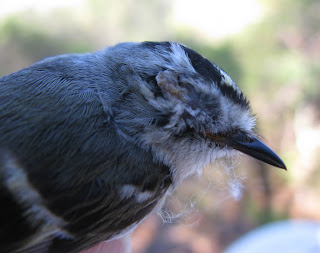 The other interesting bird was a female Golden-crowned Kinglet with a growth that had totally obliterated her right eye. It almost resembled what we see on birds legs sometimes called 'scaly leg'. 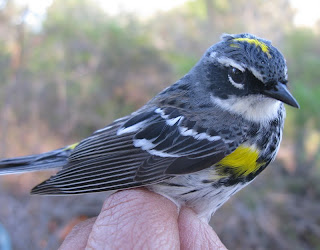 Our first yellow-rump warblers (Myrtles) came through on Friday too- all older adult males.
Saturday 1 May & Sunday 2 May 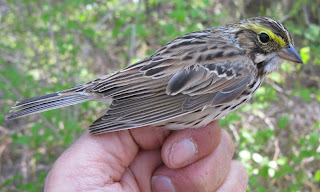 Wow, what a difference a day makes. Wind direction turned south on Saturday and was as calm as can be. We captured 55 birds with numerous migrants. Some of our regular breeders returned; Gray Catbirds, Prairie Warblers, and Common Yellowthroats. Sparrows included White-throats, Swamps, and  a Savannah (pictured above).
Our most interested bird of the day was quite unexpected. I was walking through the meadow towards our nets out on the bluff and I spotted a rather large bird on the ground. I needed my binoculars to see it. I was shocked to see a Northern Gannet! It must have been blown in by the high winds the previous days and somehow injured its wing. I was able to capture it and a volunteer from the museum took it to a bird rehabilitator. 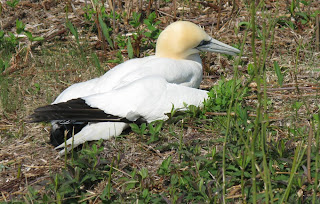 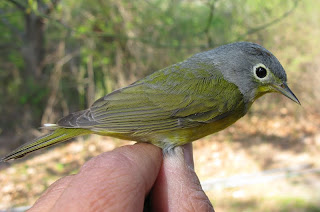 On Sunday we were treated to a White-eyed Vireo. This bird was aged as a second year because of the molt limit present in the primary flight feathers. According to Pyle, WEVI's typically have an eccentric molt  sequence during their first prebasic molt. This bird replaced its outer primaries 5-9 and retained the inner 1-4, although difficult to see in the photo below. 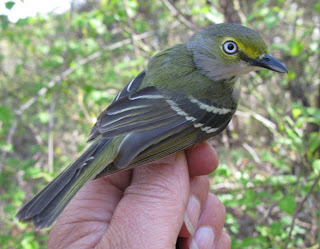 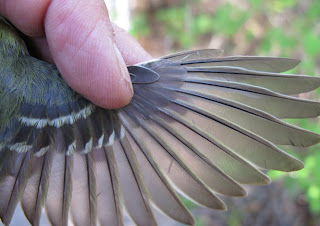