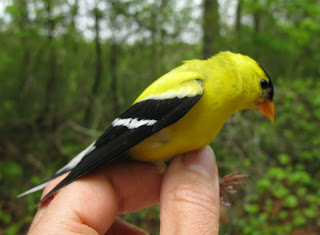 Friday, 23 April - Sunday 25 April 2010
It's always great to get back to banding again after the winter's hiatus. We had a fairly good show of birds for our first week of banding this spring season with a total of 63 birds in all. It was a foggy start on Friday with a few quick sprinkles and quite windy the following two days. Wind is always an issue in spring on Cape Cod. We recaptured a few old friends, a 9 year old Blue Jay, a cardinal and chickadee both 8 years old, a Song Sparrow and American Goldfinch 7 years old and a Northern Cardinal who is at least 6 years old. A Ruby-crowned Kinglet was happily singing all around the banding table each day, but we didn't capture him. A Prairie Warbler showed up on the 24th, but he also eluded us! It is always nice to get thrushes and we recaptured a Hermit Thrush on Sunday, banded last year as a hatch-year bird.