I enjoyed 4 days of banding this week. On Monday 40 delightful people from the Nauset Newcomers Walking Group joined me for a banding demonstration. 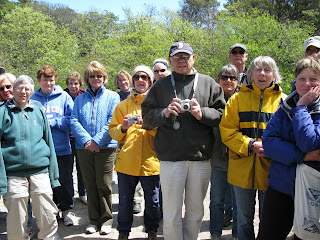 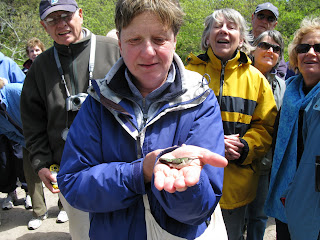 Many were thrilled to be able to hold and release birds they could see up close. The highlight of the morning was a female Ruby-throated Hummingbird, the last bird of the morning. When I asked if someone would like to release the bird, Barbara Murphy stepped forward and could barely contain her excitement. I'm always thrilled to see that enthusiasm!


The bird stayed on her hand for a few minutes before flying off. 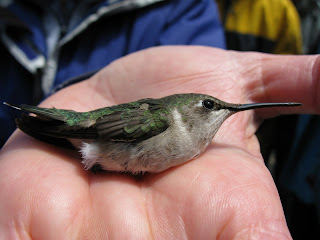 The rest of the week proved to be uneventful. Wing Island is not the best migrant trap in spring!! However it is always nice to capture a beautiful warbler, and this Yellow Warbler fits the bill. They breed in our area and are a welcome sight in the nets. This bird was born last year and aged/sexed as a second year male. 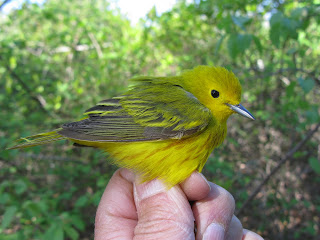 Winds were from the NW and quite blustery all week, not a good combination for banding birds. On Saturday we captured numerous Common Yellowthroats among other species. Interestingly, I noticed a distinct difference between the coloration on two male yellowthroats. One had the typical yellow color to the throat that we usually see, but the other one had a orange cast to its throat.
I've only noticed this in the past few years as Tartarian Honeysuckles have made their presence on the island. This plant generally has pink or red flowers and birds who eat the fruit often have a more orange coloration to their typically yellow feathers. I've seen this in Praire Warblers, the tips of tail feathers of Cedar Waxwings, and Baltimore Oriole feathers take on a reddish tone. 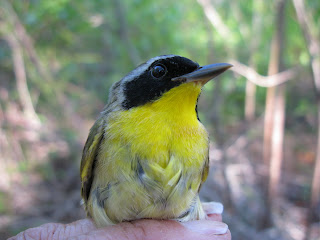 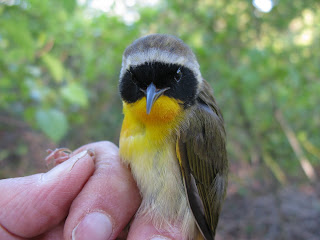 I heard Magnolia Warblers singing on the island both Saturday and Sunday but we only captured a few of them. They breed in Western Mass, Vermont, New Hampshire, Maine, and Canada and are just passing through our area, but they are one heck of a beautiful bird!! 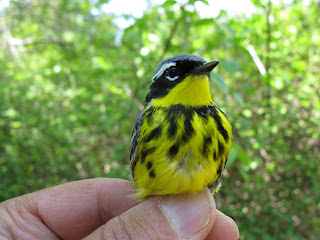 We had 26 returns of birds banded in previous years, the oldest being a Gray Catbird and an American Goldfinch both at least 6 years old.
Many thanks to Carolyn Kennedy and Judith Bruce who helped at the banding demonstration on Monday. Thanks also to Gretchen Putonen who helped both days on the weekend, Roger Mongold on Saturday, and Carolyn on Sunday. The following birds were seen, heard, and/or captured from 10-16 May. Numbers reflect captured birds only:
Total birds: 116     Total captured species: 17  Birds/100 net-hours: 21
Double-crested Cormorant
Great Blue Heron
Brant
Canada Goose
Osprey