Migration Comes to a Halt

Delightful weather enabled banding 7 days this past week. Even at the beginning of the week migration had came to an abrupt halt. Birds captured were few and far between as many of them are busy with nesting activities and those moving northward have already done so. Tuesday was my busiest day with 32 birds captured. Our first robin caught this spring was a second year male in full breeding condition, primed and ready! 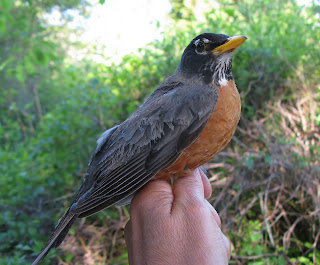 I was happy to hear bobwhite calls as I made my rounds. Last fall approximately 25 young were released on the island and I don’t think too many survived the winter.
I also spotted Saltmarsh Sparrows (formerly Saltmarsh Sharp-tailed Sparrows) this week but they eluded our nets. There has been one in the same spot in the marsh and I’m hoping its breeding there.
Wednesday brought a special bird, a species we don’t capture too often. A Black-billed Cuckoo! 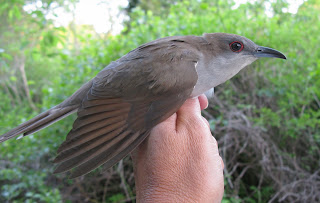 Their numbers fluctuate from year to year depending on food availability. They enjoy caterpillars immensely. This bird can have a complete molt in its first year, so I was unable to determine if it was a second year bird or older. Banders then have to age the bird as AHY (after hatch year). I also had to sex the bird as unknown, although the wing was very short leading me to suspect male, which tend to be smaller in this species. This bird presented with a brood patch, but both sexes are known to incubate eggs.


Note the beautiful red orbital ring surrounding its eye. In juvenile birds this appears as a dull greenish color, but changes gradually to a red color of the adult through winter and spring. 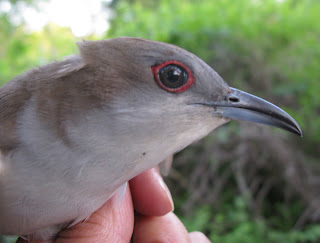 Another fine bird captured on Wednesday was a female Eastern Kingbird. She had a brood patch, her wing length was too short for a male and her outermost primary feather also pointed to female. Kingbirds breed on the island and we can hear their static-like song throughout the meadow. They belong to the family of flycatchers and capture insects on the wing. 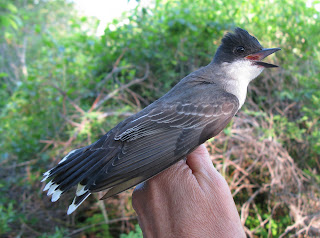 Those who haven’t seen a kingbird up close may not realize it sports a beautiful orange patch on its crown. 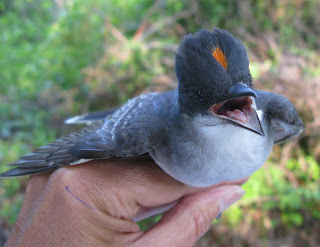 Another bird captured today was a Gray Catbird that felt enormous when I took it out of the net. During banding I noticed a huge fluid filled area on its chest/abdomen. I’m inserting this picture in the hopes that another bander might recognize this condition. Fluid filled the right side of its body from the fulcrum down to the cloaca. Any thoughts would be appreciated. The normal red muscle color on the birds left is barely perceivable and the abdomen was fully feathered. 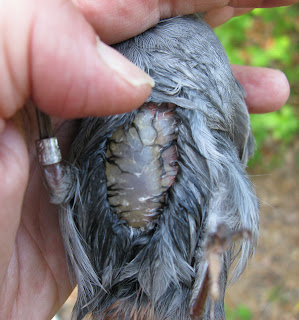 On Friday the only different species I had from the rest of the week was a male European Starling. 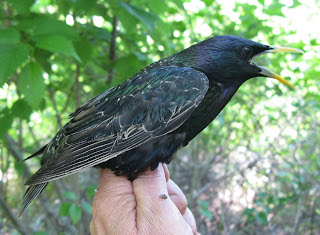 The starling is an introduced species brought over sometime in the nineteenth century. Their sheer numbers and aggressive behavior cause them to be disliked by many people, but one cannot deny the stunning beauty of their shimmering feathers up close. 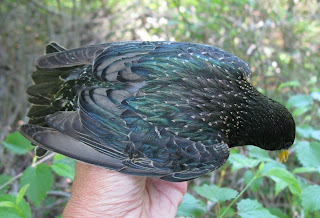 This was the week for blackbirds. On Sunday we captured both  male (top) and female(bottom) Red-winged Blackbirds. You can see by the pictures below how different they look. Plumage in the female is cryptically colored to enable them to hide in marshes where they nest. 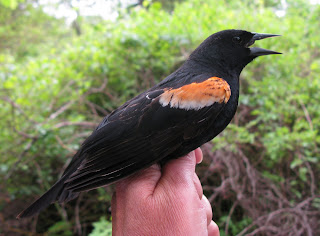 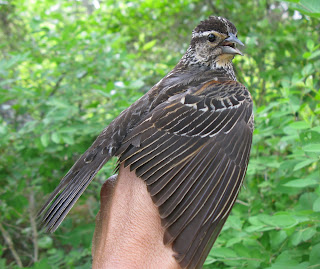 Common Grackles also belong to the Blackbird family. They are fairly big birds and their toenails really hurt when pressed into your fingers! They too have stunning shimmering feathers. 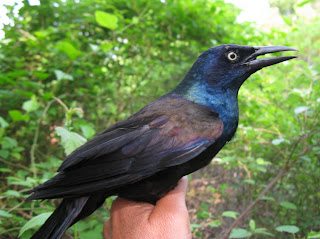 We closed the nets up early on Monday. Bird activity was very slow and I have to say I was ready to head home after a long week of banding. We did manage to capture our first male House Finch (another introduced species) of the year. 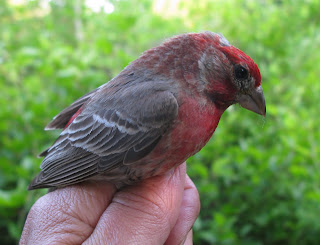 You can see the typical streaking of the undertail coverts in the picture below not usually present in Purple Finches in the east. The bill also has a substantial curve to it. Another good indication this is a House Finch is the fact that it didn’t bite! Purple Finches are more aggressive when handled. 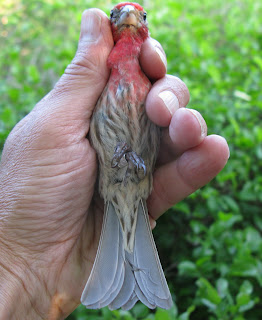 With migration coming to a close and birds busy with young, I won't be banding as often in the summer. I usually try to sample the area two/three times a week specifically targeting ticks we pull from birds. I may be posting every other week unless there are some great birds to share!
I want to thank bander Gretchen Putonen for running the banding station when I was away on Saturday and for banding with me all weekend. Many thanks also to Carolyn Kennedy, Judy Keller, and Judith Bruce for helping out this week. The following birds were seen, heard, and/or captured from 25 – 31 May :