Our Fifth New Species for the Year

18-24 October
As I made my way out to Wing Island along the boardwalk this week, I was greeted by clouds of robins ascending from the island to the skies. It certainly seems to be a good roost site, with loads of berries for an early morning breakfast before heading off. Surprisingly we only captured one robin this week among the hundreds that utilize this area. 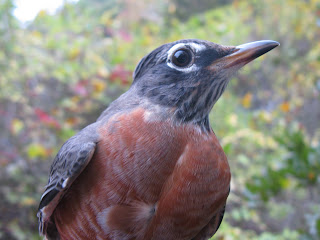 Banding occured Monday, Tuesday, Thursday, and Sunday. The front that passed through left high winds and cold temps, not a good combination for banding so Friday and Saturday were out. Yellowrumps continue to dominate our nets. Thankfully they have to be the easiest bird to remove. Downright passive about the whole thing. It isn't unusual for all birds found in a net to be yellowrumps at this time of year traveling in large groups. We call them MYWA's, since we go by the subspecies Myrtle Warbler. 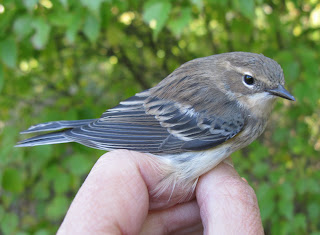 Normally I'm banding MYWA's very quickly. Ageing and sexing them is fairly easy and are probably out of my hands in 20 seconds. The bird pictured above gave me pause however, when I noticed an abnormality on its hallux, or rear toe. 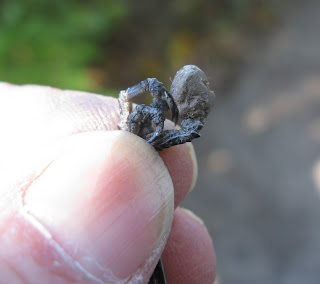 The entire toenail was encased in this hard substance. I don't know if it was an abnormality in the keratin of the nail or some kind of parasite. Then I noticed it was present on the left hallux also. 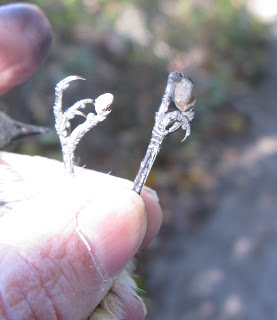 Any ideas? Seemed different than a pox or scaly leg. I didn't try to remove it for fear of causing bleeding.
Next to MYWA's, we've  had abnormally high numbers of Golden-crowned Kinglets and chickadees this week. Over the past 10 years our average number of banded golden-crowns is 13. We have already banded 77 this year and our season still has another month to go. Ruby-crowned Kinglets (below) aren't as numerous this year and while we've banded quite a few (27), numbers are comparable with past years. 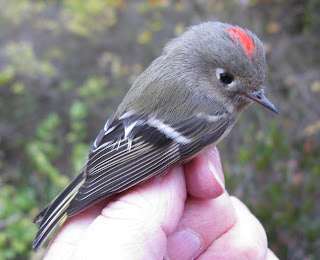 Chickadees are another story! Ten chickadees in this net, ten in the next net, has been the norm this week as we silently curse under our breath. Don't get me wrong, we love our chickadees, but they are the opposite of MYWA's removing from a net. They bite and clench with their feet making it a lot harder on themselves. Some of these chickadees must be migratory. I'm finding many loading up with fat. Nothing beats the weekend in Oct, 2001 at Braddock Bay Observatory in New York. I was there for 3 days being examined for my Bander Certification test. Occasionally they experience a huge migration of chickadees making their way over Lake Ontario.  And that's just what happened. We banded over 300 chickadees one day and over 400 the next. Thank goodness there were lots of us there to process these birds. And thankfully I passed my test! Here's a chickadee about to give me a final bite before being released. 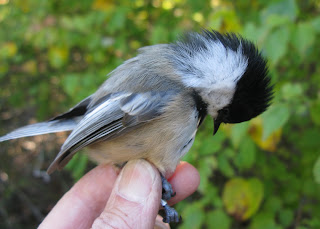 Hopefully this bird is not one migrating elsewhere since the tail was so worn many feathers were half the size. It may have experienced some nutritional difficulties while the tail was growing in producing feathers of poor quality. The one good feather (r4 on the left side) was probably replaced. 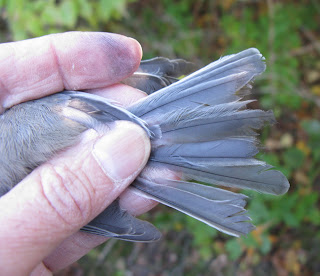 We captured only 2 Blackpoll Warblers on Monday and Tuesday, most have gone through. Considered one of our confusing fall warblers, Blackpolls can resemble Bay-breasted and Pine Warblers in the fall. 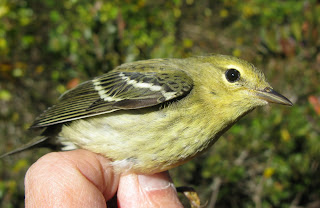 Unlike Bay-breasted Warblers who have black feet, Blackpolls feet are yellow. 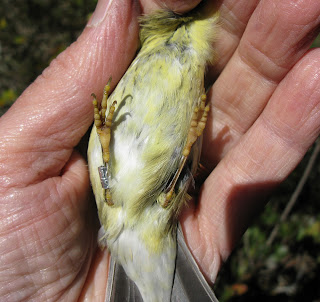 Pine Warblers have clean backs, while the backs of Blackpolls are streaked. 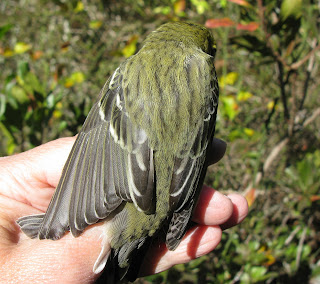 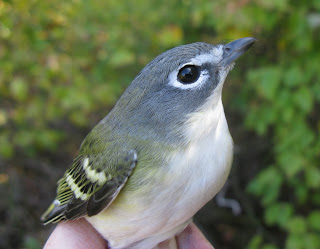 along with a new species for our station, a Grasshopper Sparrow! 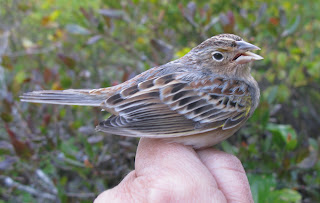 Notice the bold, heavy white eye ring and the yellow feathers at the bend of the wing. 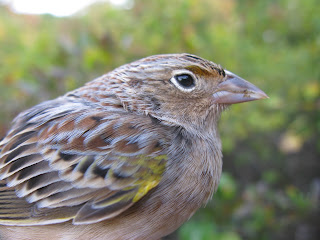 I thought the feather combination on the back was so beautiful. 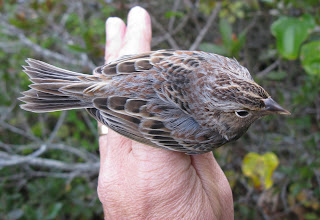 On Sunday, we had our biggest day all year with 225 birds captured, the majority being MYWA's of course. In the mix was a rather late hatch year Common Yellowthroat of unknown sex 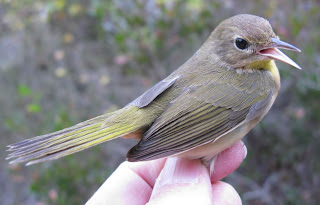 and this female Red-breasted Nuthatch. 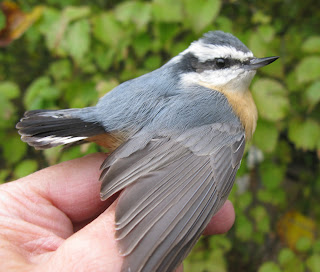 I was unable to age her, but sexing was easy as the grayish-blue crown blended in nicely with the same back color. Males have black crowns. 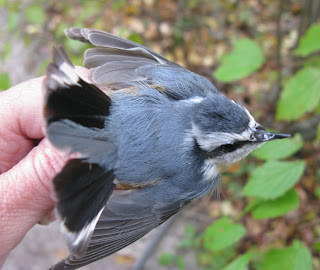 I stayed later on Sunday than the others opting to keep a few nets open. As I did the last round I was rewarded with the best bird of the day, a hatch year male Sharp-shinned Hawk, our first for this fall season. They rarely bite, but we must make sure we always have control of their talons. It can be quite painful if they get a hold of you with their feet. 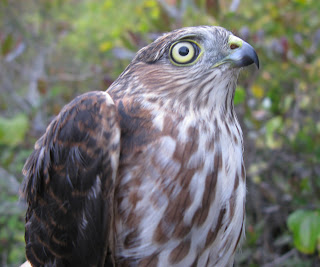 He kept a close eye on me turning his head almost all the way around as I took a picture of his back. 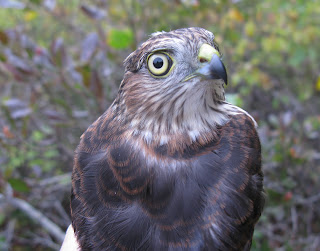 As always, thanks very much to following people for assisting me at the banding station this week: Mary Bassing, Jo-Anna Ghadban, Judy Keller, and Carolyn Kennedy.
The following birds were seen, heard, or captured between 18-24 October. Numbers reflect captured birds only.