7 - 10 October
Rain and high winds still prevailed this week. It wasn't until Thursday that I got back out in the field. All our banding is done outside, so I constantly have the elements to contend with. I took a gamble on Thursday as there was a 50% chance of rain and sure enough it came in at 10 am. Not a heavy rain, so I managed to close down the nets I had open quickly and went back to furl them after processing. A makeshift tarp above the banding table kept the equipment dry.

Was I ever glad I took a chance today and banded. I captured our first Prothonotary Warbler! What a gorgeous bird. 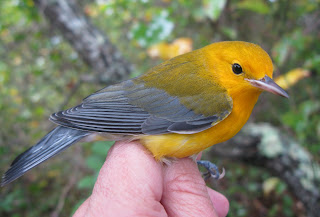 He was a hatch year bird aged by skulling. The males have more contrast between the yellow crown/nape (with a greenish wash) and the green back than females 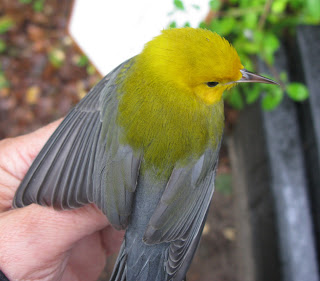 and more white in the rectrices. Young females typically have white patches only on the 2 or 3 outer tail feathers. 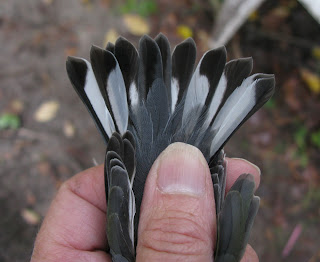 This bird had a pinkish color to the toenails. Since I've never handled a Prothonotary Warbler before, are the toes normally dark? What causes white or lighter color toenails? I've been trying to find that answer in books and on the net to no avail. I've only read about leucism (a defect in the deposition of melanin in the feathers) describing feathers. 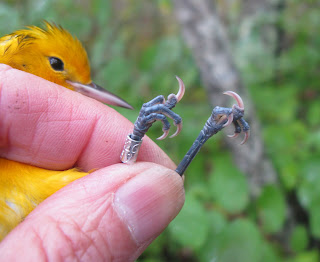 Speaking of leucism, I banded 3 hatch year (HY) Black-capped Chickadees this week, all sporting leucistic feathers. Same family maybe? In the past I've caught HY chickadees that were noted to be leucistic and upon recapture maybe a year or two later had normal colored feathers. I'm assuming the leucism in those birds was disease or diet related. 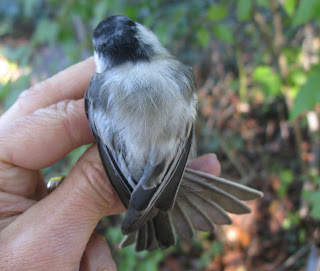 A few towhees are still around and this week I banded two females, an adult and hatch year. It is tough to see the molt limit in HY female towhees after their first prebasic molt, the color of the greater and primary coverts is very similar. Other than skulling, here is a good example of eye color being helpful. The adult definitely has a red eye 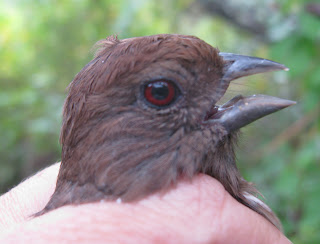 and the HY bird has a brown one. 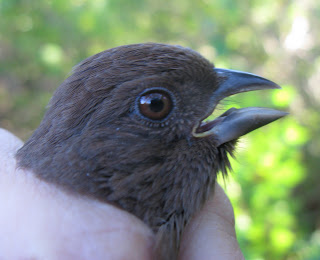 I'm still finding many ticks on our birds, mainly in the ears. I've also been noticing bright orange bugs in the ears and have been investigating what they might be. The only thing I can come up with are harvest mites (the larval stage of chiggers) but please enlighten me if that is incorrect. From what I understand they feed on skin cells, cause intense itching, and leave red areas where they feed, which was the case on all the birds infested with these creatures. Here is the adult towhee with them in her ears. 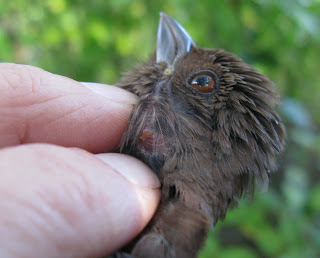 Thursday ended up being a very slow day for this time of year with only 23 new birds banded and 9 recaptures. I guess the excitement for the day was another extremely high tide that Jan Bridge and I were caught in as we crossed the island. Jan, being a new helper, was a real trooper though, and while being a bit apprehensive, understandably not wanting to fall in while carrying camera and cell phone, managed to cross over the board walk through thigh-high water. We had a good laugh as I  helped  take her boots off. Her feet where sucked into her boot and I almost fell on my behind trying to pull them off!
Friday the 8th was a busier day with 51 new birds, 14 recaptures and 1 Black-throated Blue Warbler escapee (darn it!). We did band another Black-throated Blue, HY male, so I didn't feel so bad. 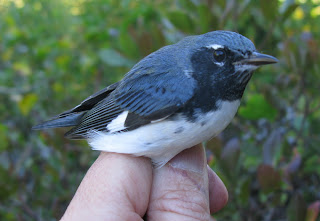 Yellow-rumped (Myrtle) Warbler numbers finally increased today. Usually by now we have banded more than 10x the number we have so far this year, probably due to the windy, rainy days when I couldn't band. It seemed to be the week for gross bugs. I thought I saw a tick on the chin of this yellow-rump and when I tried to take it off with my tweezers the bug got away from me and pulled itself into a hole in this poor bird's chin, which was oozing blood. Could this be Bot-fly larvae that had burrowed into the skin? It went in so far that I could no longer see it. Incredibly I recaptured this same bird on Sunday and was going to try to sneak in and grab it, but there was no longer any evidence of the insect and the wound had completely healed over. 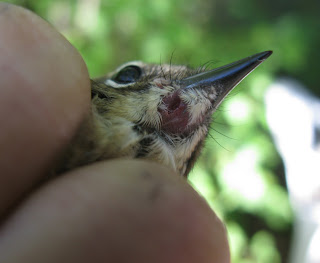 I also captured a Gray Catbird with a noticably thicker right leg than left and a long hair-like projection a good centimeter long coming out of the leg, which I removed. Guess with my medical background I'm fascinated with all this! Back to "normal" birds-
Kinglets arrived in good numbers this week, with 16 new Golden-crowns and 13 new Ruby-crowns banded. Most of the Golden-crowns were males sporting colorful head plumage. 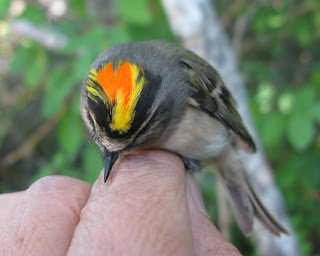 Numerous Palm Warblers were banded and surprisingly we had greater numbers of Yellow Palms than Western, which we usually band more of in the fall. This colorful Palm was easy to identify with the very yellow breast and belly, not contrasting with the yellow undertail coverts. More often than not they tend to be more subdued and we use tail and wing measurements as an aid to identification too. 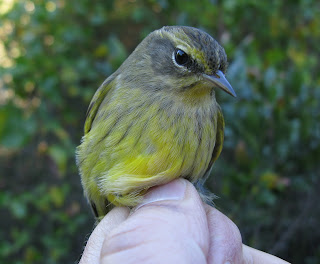 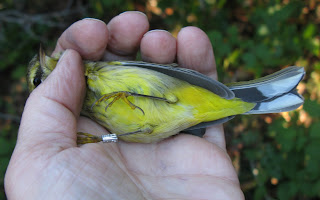 We had a busy day on Saturday with 112 birds of 24 species, half of those being yellowrumps (and just when I thought they had by-passed us). We banded our first Eastern White-crowned Sparrow for the fall, a hatch year bird. 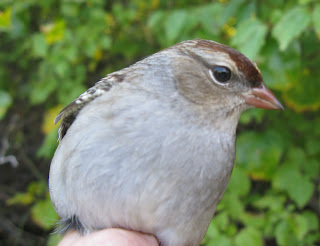 Here is what this bird will look like in the spring after going through a pre-alternate molt. 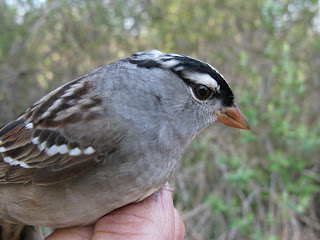 Our first Marsh Wren showed up too, caught in our salt marsh nets specifically put up in the fall for sparrows (and occasionally rails). 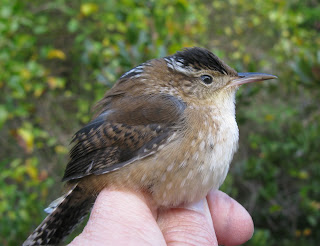 They have a beautiful mixture of brown, black, and white plumage coloration on their back, head, and tail. 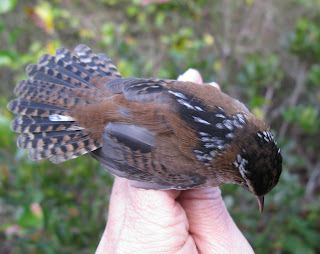 Another new fall species today was a hatch year male Red-breasted Nuthatch. We have certainly heard them constantly in the surrounding trees but like the White-breasted rarely capture them in the nets. 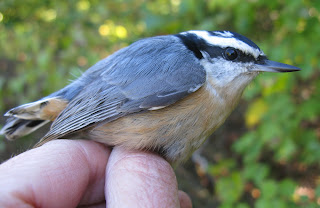 Our goldfinch numbers are down for the fall with almost all birds being hatch years. They have a browner appearance than adults (also lighting was bad the day I took this picture) 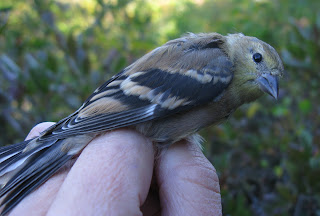 and we sex them by the wing color, black in males 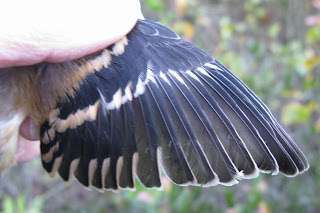 and more dusky in females 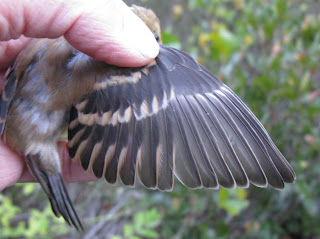 I received a banding report from the Bird Banding Lab that a HY Gray Catbird we banded on July 30th of this year was sadly found dead in Silver Spring, Maryland on September 26th as it made its way south for the winter.
As usual, many thanks to all who helped this week- Mary Bassing, Jan Bridge, Jo-Anna Ghadban, and Gretchen Putonen.
The following birds were seen, heard, or captured between 7-10 October. Numbers reflect captured birds only.
Total Birds: 305                          Total Species: 53
Total Banded Species: 32            Birds/100 net-hours: 71

I live in San Francisco and recently saw and photographed a White-crowned sparrow with a yellow band plus the standard printed band on left leg, white band on right leg. Any idea to whom I should report this, or where it may have been banded?

Hi Al,
You can report your sighting online to the Bird Banding Laboratory in Laurel, MD. Here is the link to report a color marked bird.
http://www.pwrc.usgs.gov/bbl/bblretrv/recwobnd.cfm?aou_type=Unknown#top

If that link doesn't work just go to the BBL website
http://www.pwrc.usgs.gov/bbl/
and at the top of the page click on 'Report a Bird Band or Color Marked Bird' and then on that page click on the sentence that says 'Report a color marked bird with no or unreadable Federal band.'