Myrtle Warbler numbers increased substantially this week and will probably maintain those numbers for the next two weeks. Species diversity has dropped as most of the warblers have gone through. I was able to band Monday, Wednesday, Thursday, and Sunday. Winds died down for most of the week, but Friday a front came through. Saturday was just too windy to band with gusts up to 40 mph. Winds lessened a bit on Sunday so we gave it a shot opening our less exposed nets.

The majority of thrushes have already migrated and we band mainly Hermit Thrushes from now through November. We had 2 new captures on Mon and Wed, both hatch years. 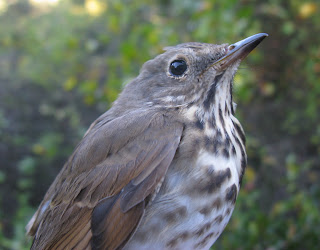 Hermit Thrushes have reddish tails contrasting with the browner back. 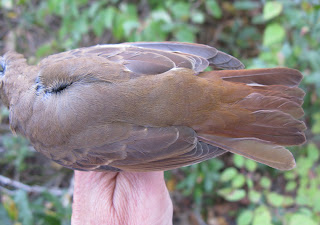 Adults can have buff tips to the greater coverts especially when the feathers are fresh, but hatch years will have a teardrop or triangle shape with the buffiness traveling a bit up the feather shaft of the retained coverts. 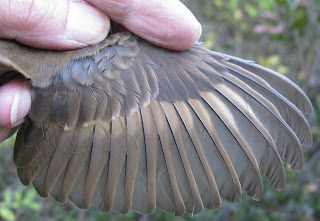 We caught our last towhee on Wednesday and haven't heard them since. Brown Creeper numbers have increased with captures all four days. More study is needed on plumage characteristics to differentiate hatch years from adults at this time and we don't capture enough creepers to look into it. Once the skull has ossified I have to age them as U or unknown age. 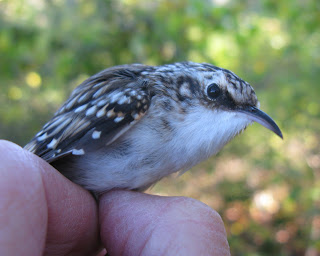 Another Yellow-breasted Chat was caught on Wednesday as well as this adult Blue Jay. People often assume Blue Jays are aggressive when in actuality they are fairly docile when handling them. The worst part are their feet which clutch on your fingers and their nails are sharp! 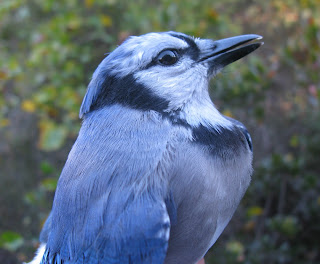 Adults have barring on their primary coverts (the duller shorter feathers towards the outside of the wing above the primaries) while hatch years have no barring until their 2nd prebasic molt. 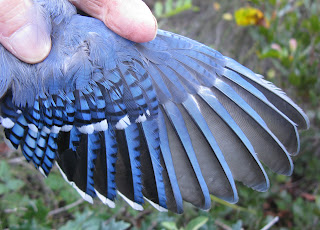 Carolina Wrens were banded both Thursday and Sunday 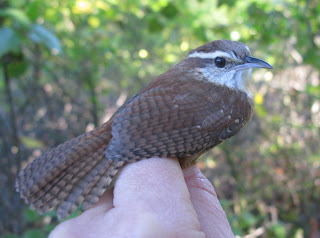 as well as titmice and this one posed so nicely for the camera. 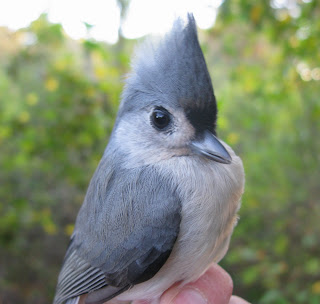 We've banded more Golden-crowned Kinglets this fall than we ever have in the past ten years. Here is a male with a bit of attitude showing off his crest. 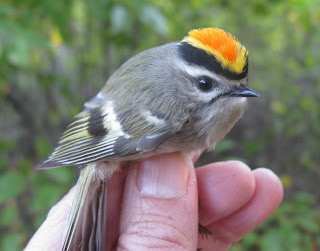 The female was a bit more subdued. 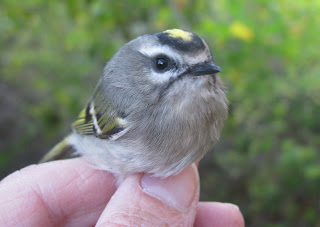 Wednesday also brought in a second Brown Thrasher, a species we rarely band 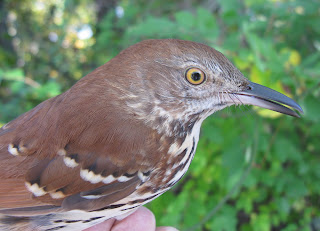 as well as an Ovenbird. 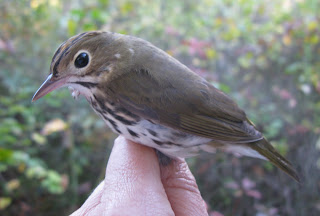 Many thanks to Mary Bassing, Tom Burgess, Jo-Anna Ghadban, Carolyn Kennedy, and Gretchen Putonen for helping this week.
The following birds were seen, heard, or captured between 11-17 October. Numbers reflect captured birds only.