I banded 5 days this past week. On the 31st, the Yellow-breasted Chat caught on August 28th was recaptured along with another Yellow-bellied Flycatcher. But it was really CATBIRD day with 45 catbirds (over half our total) processed. Some of the earlier born first years were sporting nice plumage, completing their preformative molt and starting to put on fat, while others were still very young and had to be returned to the area where we found them. The adults we captured were all looking very ratty going through their molt. One of the recaptured adults was originally banded as a young bird in 2006 and this is the first time we've caught her again in 4 years. 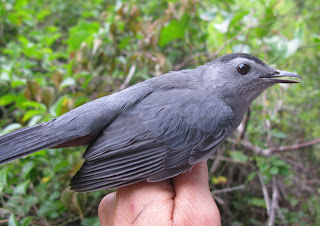 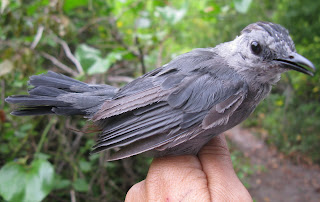 Other nice birds this day included 5 Red-eyed Vireos and 4 Ruby-throated Hummingbirds with one hatch year male who posed nicely for a photo before taking off. 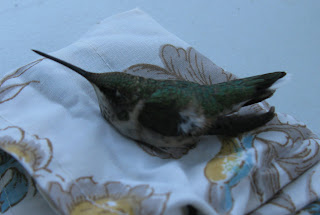 On Thursday Sept 2nd, my friends Linda and Bruce Bohlen brought their grandchildren to learn about banding birds. They were able to see and hold an Ovenbird, Eastern Phoebe, Prairie Warbler, Red-eyed Vireo and numerous other species. Emily and Peter had a great time helping and releasing birds.
Peter and a Song Sparrow 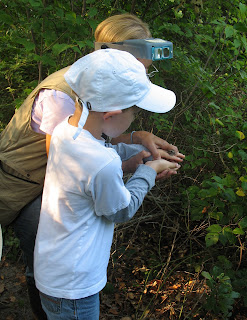 Emily with a catbird 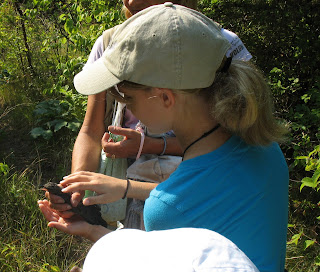 While we had some nice birds on the 2nd and 3rd, the real fun began after Hurricane Earl. It was fairly quiet Friday morning and I kept a close eye on the radar to watch for the approaching storm. We closed up early and it was a good thing too because the clouds opened at 11:00 and Gretchen and I skedaddled off the island and back to cover. Saturday was very windy so we didn’t get back to the nets until Sunday the 5th. What a great day with many migrants coming through. We began opening our nets at 5:50 am and in the first round had another Traill's Flycatcher and this hatch year Magnolia Warbler. 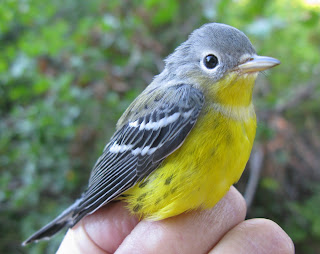 I conservatively sexed the magnolia as unknown. Peter Pyle, who wrote the banders' bible, I.D Guide to North American Birds says hatch year birds of this species are not reliably sexed. The Bird Banding Lab will only accept unknown sex at this time of year, but  I left in my notes that I suspect a male, due to long wing measurement, the bluish edging to the uppertail coverts (the small feathers above the tail feathers) and a good amount of white in the tail. 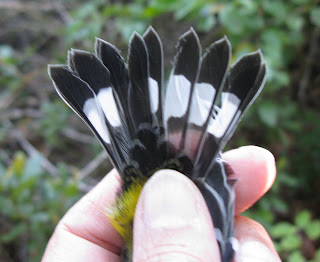 Although they breed here, we haven't caught a Pine Warbler since the spring, but this hatch year male showed up in our nets on the first round too. 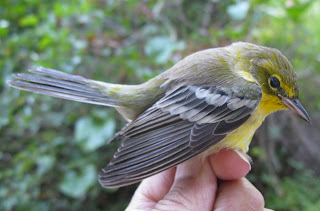 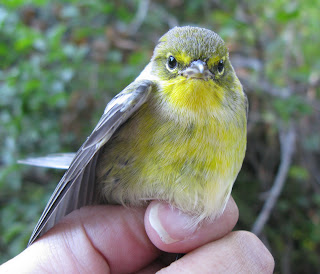 We found 2 similar looking hatch year Chestnut-sided Warblers on the next round, 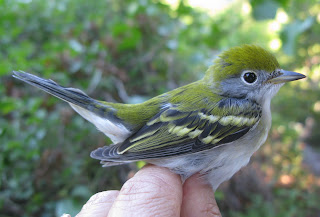 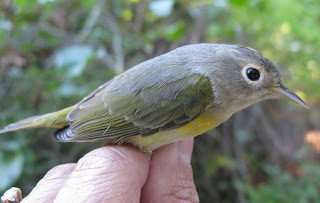 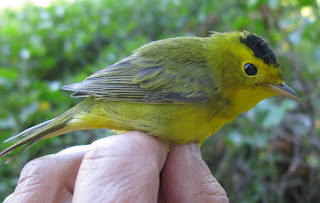 The yellowish edging to the black feathers of the cap indicate a hatch year bird. 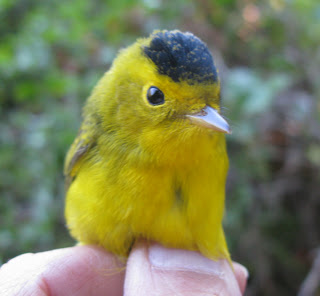 Wait, I'm not done yet! We also had a hatch year male American Redstart with bolder coloration than a previous bird, 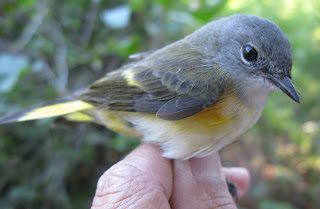 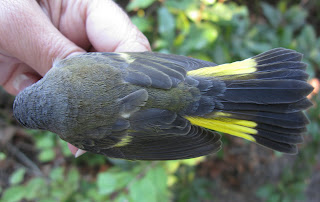 and a Warbling Vireo 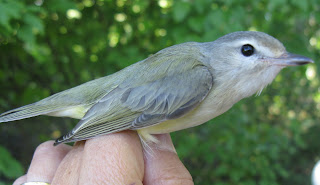 To end the morning on a colorful note, the last round produced two gorgeous hatch year male Black-throated Blue Warblers. 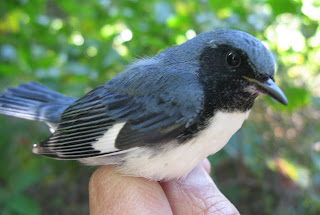 We look for a molt limit in the wing of hatch years and this bird is a good example. He molted all his wing coverts up to the alula covert (the very tiny top feather edged in blue), which we refer to as A1. His 2nd alula feather below that one (A2) is an unmolted juvenal feather edged in green. You can probably see this better by clicking on the photo and enlarging it. 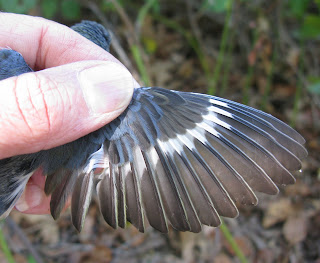 Although Gretchen and I captured almost as many birds on Monday as on Sunday, it felt like a slower day. Friends of Gretchen's came on Sunday and maybe it seemed slower on Monday due to lack of questions!! We caught another Black-throated Blue, another Yellow-bellied Flycatcher, and our first Blackpoll Warbler for this fall. 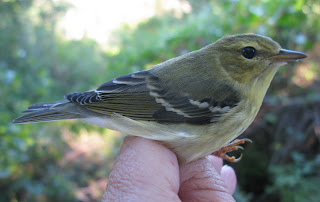 Then came another gorgeous male Yellow-breast Chat. I think I have to take a picture of every one because they are such a gorgeous bird. They can give a good pinch to your fingers however and are so unwarbler like. 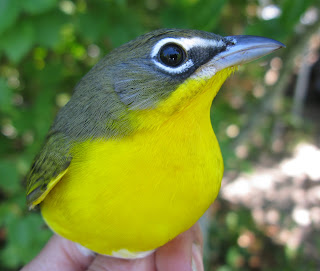 It neared the end of the morning and we had a few birds left to process. Gretchen grabbed a bag and as she pulled out a bird my heart almost stopped. She said, "Sue, your hands are shaking!" I said, "whatever you do, don't let go of that bird" I gently took it from her, looked at it closely, and and replied, "I think we have a Swainson's Warbler!!" She had that in the back of her mind too. Neither of us have ever seen one before, let alone banded one. But after studying bird books for so many years, what else could it have been? One look in a bird book told us we were right with that distinctive plumage and long bill. They are a southern species whose northernmost range is a small dot in southern Maryland,  so this was a real treat. I'm sure it rode in on the hurricane winds. This bird was a hatch year of unknown sex. It was also a 4th state record for Massachusetts and the first fall record. I was so glad to have Gretchen there to share it with. Very Cool!! 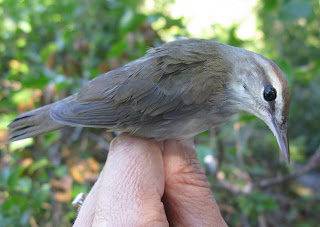 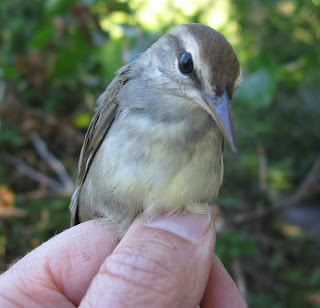 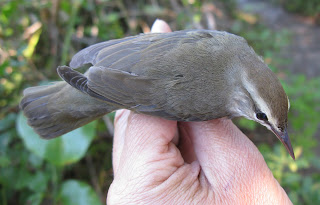 Banding is always great fun in the fall. You just never know who will show up! Thanks very much to Gretchen Putonen and Jessica Rempel who helped me this week. The following birds were seen, heard, or captured between 31 August- 6 September. Numbers reflect captured birds only.

Wow. What a great sighting! I hope the bird decides to stick around but I'm sure it has moved on. I will be down that way this coming friday and perhaps I will bring some luck.

Thanks Larry, good luck on refinding the bird!

wow! Congrats! Amazing blog and the pictures and descriptions are fantastic! Thanks for posting such an informative blog!

Awesome Swainson's find! It must have knocked you guys off your feet. What a nice series of photos. Shooting hand-held, as they say.

Yes it certainly did knock us off our feet! Very exciting. Just never know what you will find while banding.