I banded five days this past week. Migrants have increased a bit from the previous week and I'm hoping the following week will be even better. On Saturday the 21st we captured two more American Redstarts, this time both hatch year males. 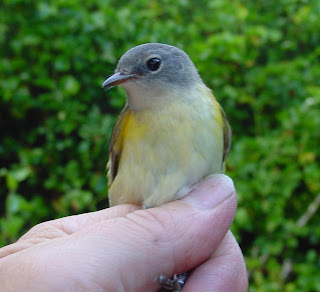 At this time of year, hatch year male restarts can look very much like adult females. We sex them by the contrast of darker breast coloration compared to a more lemon yellow color under their wings and by the dark gray rump feathers contrasting with paler gray back. 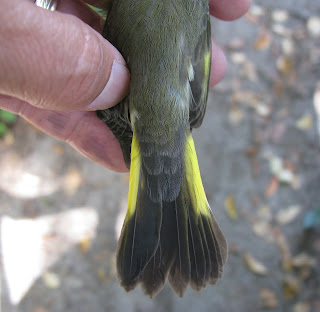 A very exciting capture for us was a Least Flycatcher, a first for the station! 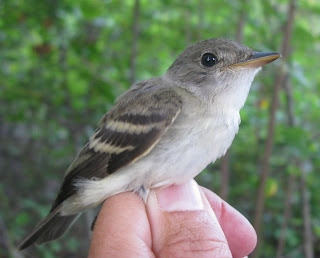 The plumage is grayer than in the other flycatchers I tend to capture. They may also have a slightly paler edge to the outer webbing of the outer tail feather as shown below: 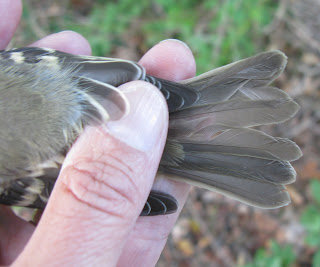 All the measurements fit the bill for Least Flycatcher too.
We captured a young molting Northern Cardinal who displayed a varied color scheme to his feathers. 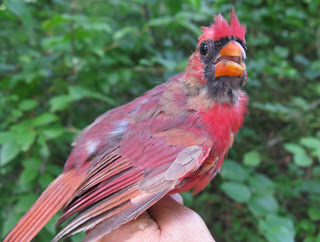 The very brown feathers are retained juvenal feathers that he will probably molt this year, as he was in the middle of his first prebasic molt, although sometimes they will retain some juvenal seconday feathers, the longer feathers closer to the body. 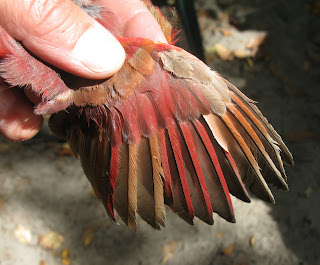 We were happy to have more Northern Mockingbirds this week. This one still had some retained spotted juvenal feathers on the breast. 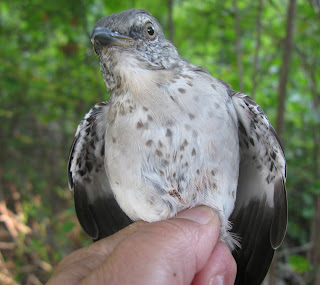 For some reason this bird also retained it's median coverts (the more worn and brown small feathers near the top of the wing) and replaced it's greater coverts (those fresher, blacker feathers directly below the med covs) but may finish molting on the wintering grounds. 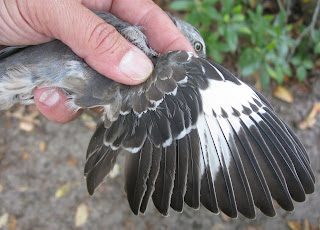 The underparts of hatch year Great Crested Flycatchers are developing more yellow as they molt. Some were just starting to in my last post. 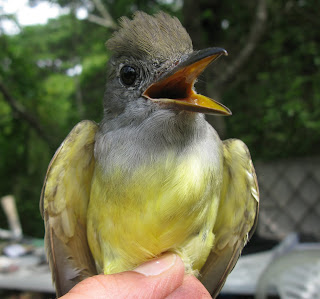 As hatch year birds molt into their adult plumage, banders have to find other ways to age birds. One way is to check for a molt limit in their wing. Adult birds will go through a complete molt, but the young of many species molt only some of their feathers. This Great Crested has a molt limit in the greater coverts. You can see the replaced inner six blackish coverts with light edging compared to the retained four juvenal browner and buff edging of the remaining outer coverts. 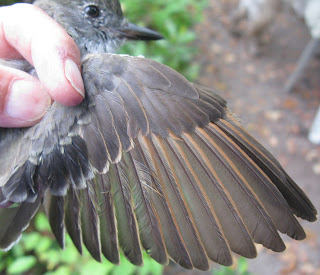 Below a young female towhee is developing her adult body plumage, 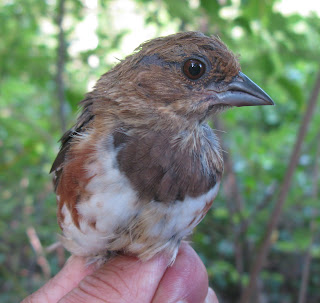 and here is her hatch year male counterpart. 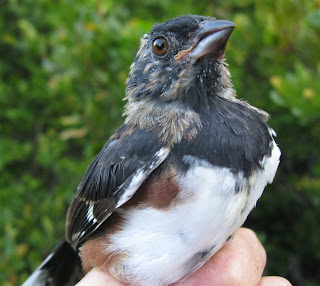 Although not a migrant, I had an interesting recapture of a male American Goldfinch on Saturday the 21st. This bird was first banded as a second year male (born in 2005) in April, 2006. Three years later I recaptured him on August 25, 2009. Goldfinches are one of our latest breeders and I expected to find him in breeding condition with an enlarged cloacal protuberance. But I was extremely surprised to find he had a full brood patch too! As I explained in a previous post, females develop vascularized bare bellies with fluid to incubate eggs. In some species males will develop partial brood patches if they help incubate eggs, but male goldfinches don't take part in this behavior. Below is a picture from 2009. It is not just the case of a female that has male-like plumage as an enlarged cloacal protuberance is visible below the belly. 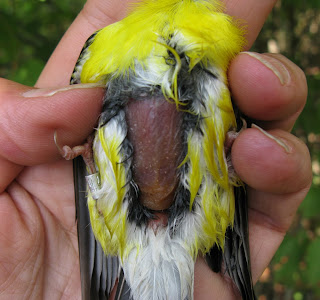 Also the plumage was clearly an older adult male. 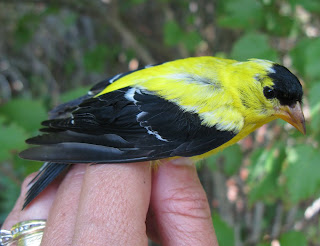 I captured this same bird  last weekend on the 22nd. He displayed the same phenomenon. 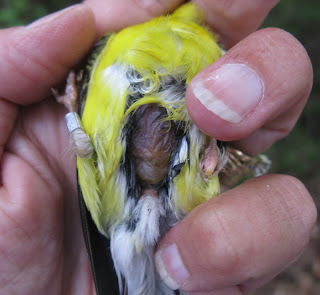 On the side view you can see the enlarged cloacal protuberance (we call it a CP). 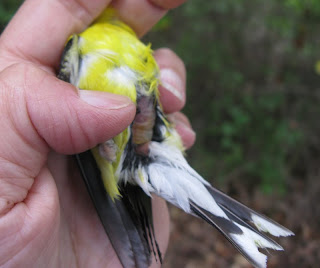 This is probably the case of some kind of hormonal imbalance specific to this bird and not an endocrine disrupting environmental toxin or we would probably find it in other male goldfinches in the area, which I haven't .
Rainy days prevailed Monday - Wednesday so didn't get out to the nets again until Thursday the 26th. It was nice to pick up another Blue-winged Warbler, this time a hatch year male. 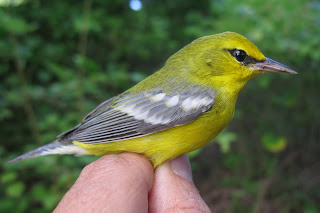 Hatch year Prairie Warblers were captured most days including this female Prairie. She had no chestnut feathers on her back and had less distinctive black streaking to her sides. 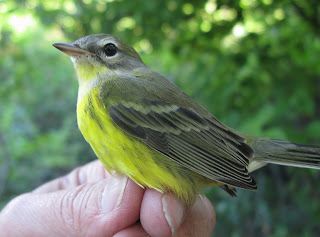 This poor adult Song Sparrow of unknown sex really needed to get going on replacing it's feathers! The feathers were in such poor condition all that was left of the middle tail feathers were the shafts. 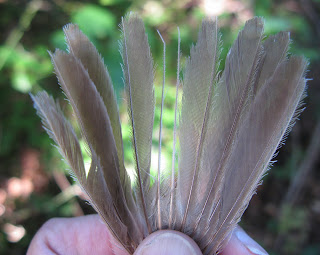 The wing feathers were poor too. 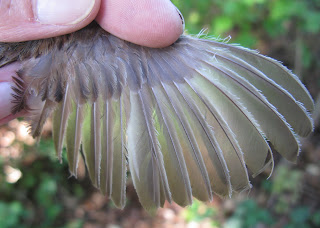 Our first Yellow-bellied Flycatcher showed up on Thursday, 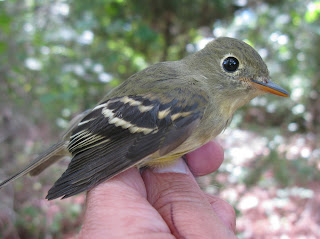 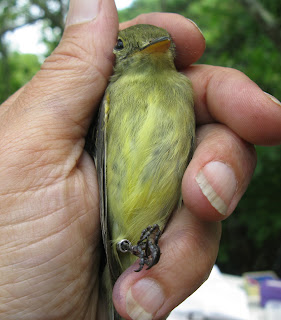 and we banded three Traill's Flycatchers this week. 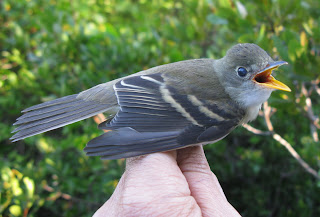 On Friday I captured our first hatch year goldfinches. 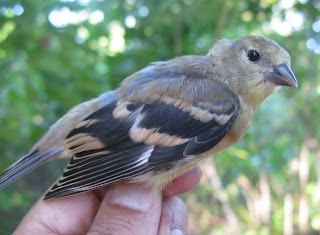 Gretchen and I had 19 species of birds banded on Saturday including this gorgeous hatch year male Yellow-breasted Chat. 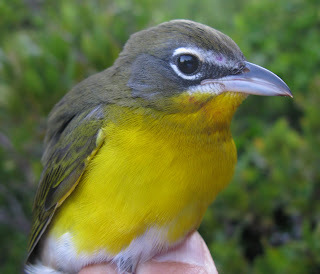 First year chats go through an incomplete molt which banders refer to as an eccentric sequence, meaning they start their flight feather molt in an atypical pattern molting outer primaries and inner secondaries. This bird however molted its outer 6 primaries (p4-p9), primaries 1-3 are retained, molted his first secondary feather and secondaries 2-6 are retained. The molted feathers are darker in color with dark brown shafts as opposed to the lighter brown juvenal feathers and chocolate colored shafts. 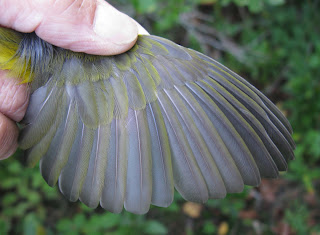 It's not often we capture Scarlet Tanagers, so we were happy to capture this first year male. Young males look similar to adult females with their lime green body plumage, except that as they molt their wing coverts come in black and contrast dramatically with the retained juvenal feathers. You can see this bird has started
molting his lesser coverts, those black feathers at the top of his wing. 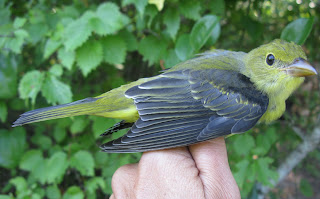 Scarlet Tanagers have a "tooth" visible on the edge of the upper mandible (bill). 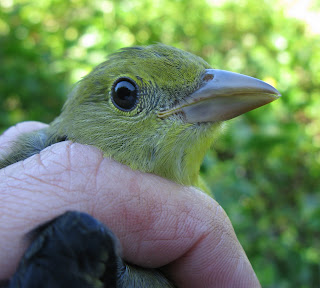 I love your blog! Thanks for all you do! :) Pam