Banding occurred on Tuesday, Thursday, Friday and Sunday this week. Wednesday and Saturday were both extremely windy days so I opted not to band for the saftey of the birds.


We had 3 species show up for the first time this fall season on Tuesday. The first was  a hatch year female Ruby-crowned Kinglet pictured below: 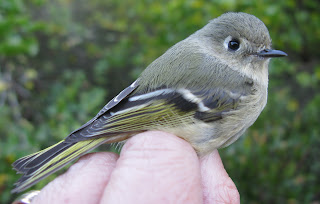 Although I was able to positively identify her as a hatch year by skulling, another clue for banders to look at is the very pointed tail feathers on first year kinglets. Some of the feathers almost appear to have small pins projecting from the ends. 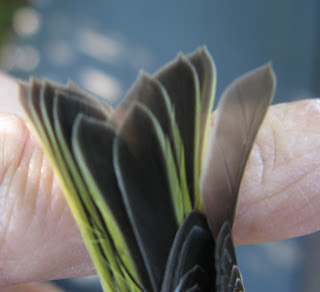 While adults tails are still pointed, they are not quite as pointed as the tail above. Below is an adult tail for comparison, although the picture isn't very good. Missing are the tiny projections at the end of the feathers. 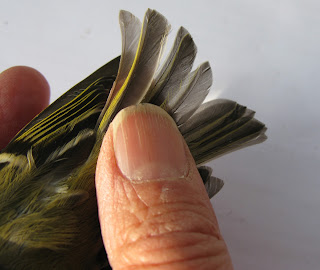 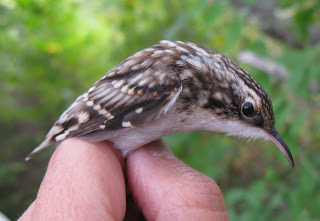 The plumage of creepers is gorgeous and cryptically colored to make them inconspicuous as they travel up and down tree trunks. 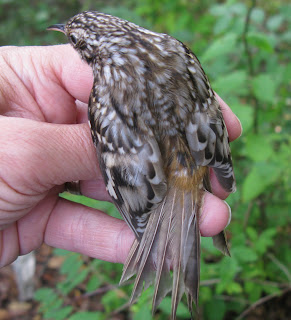 Long toenails on their back toe enable them to cling and move easily on tree bark. 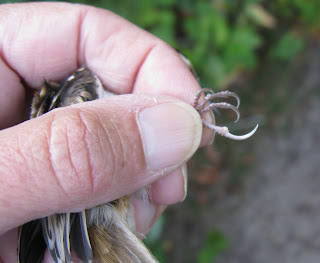 Our first Savannah  Sparrow appeared on Tuesday, one that had me a bit stumped at first as I'm used to seeing them with at least some yellow on their lores. This hatch year bird had none. 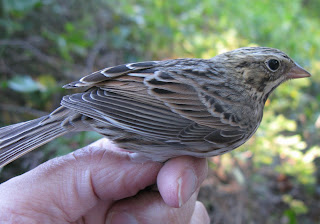 I banded a Red-eyed Vireo who had some kind of thick coating on its bill even covering its nares. 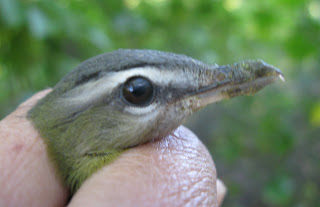 Not sure what it got into, but luckily I had my tick tweezers and was able to carefully remove it. Ah, now it can breathe easier, I'm sure! 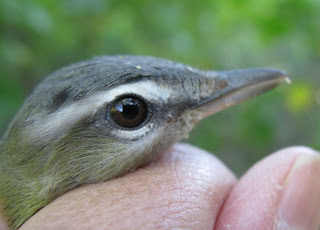 Wednesday evening, the 22nd must have been a good flight night as we banded 20 species of birds on Thursday. The first fall Swamp and White-throated Sparrows arrived. Hatch year Swamps are usually easy to age because of the yellow tint to the lores and supercilium. 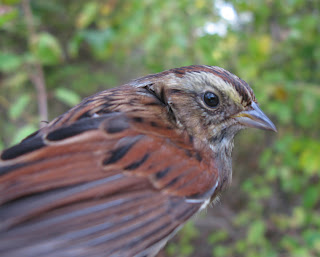 Compare to the head coloration of an adult. 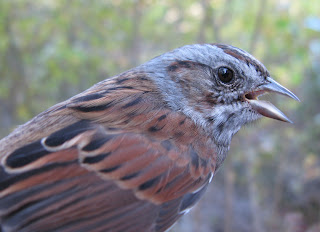 White-throated Sparrows exhibit plumage polymorphism with dull and bright forms. The White-throat we captured on Thursday was a dull morph variety. 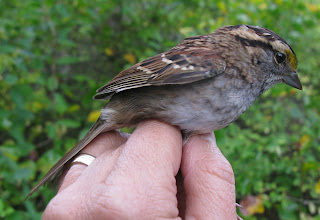 We recaptured an old friend we originally banded on May 1st, 2003 as a second year making this Northern Cardinal 8 years old! We caught him twice in '03, twice in '05, once in '08, and this is the 3rd time this year. He remains in the same area every time. I was fortunate not to get this picture without him getting a piece of me! 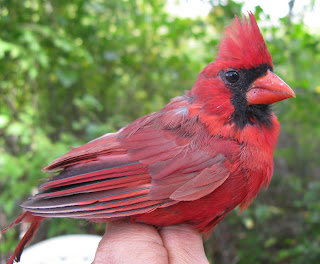 This wasn't the case with the Purple Finch, pictured below. 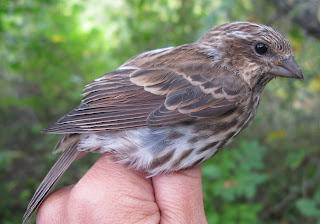 In case you aren't sure if this is a Purple or House Finch take a look at the unstreaked (mostly) undertail coverts of the Purple Finch: 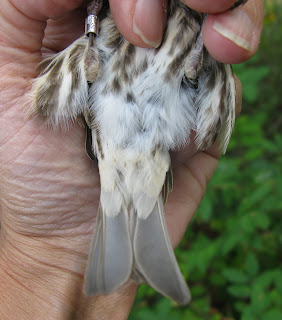 Banders can also differentiate between the two, if they bite it is definitely a Purple! 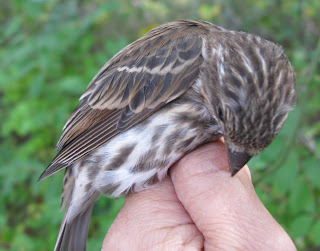 We had a choice between the best bird of the day. One was the hatch year Connecticut Warbler below. The eye ring wasn't quite as complete as I'm used to. 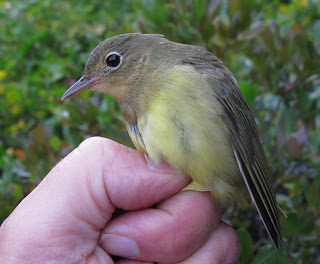 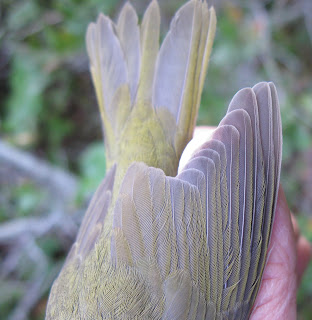 The other cool bird this day was a Gray-cheeked Thrush! Note the grayish coloration in the face and indistinct eye ring. Swainson's Thrushes have a buffy appearance and more distinct eye ring. Measurements were also done to rule out Bicknell's Thrush. 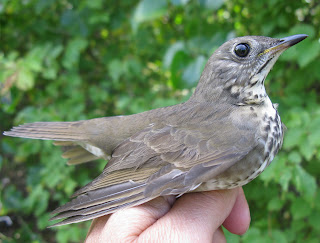 Species diversity was down a bit on Friday, but we did manage to band a Brown Thrasher, a bird we don't see too often anymore. 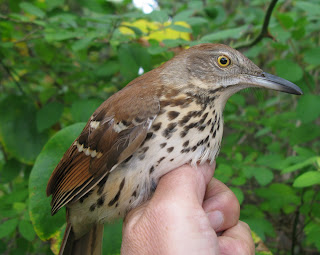 Four new Song Sparrows were also banded. Song Sparrows are hard to age by molt limits, we usually do it by skulling, but I find most of the hatch years we band replace the outer 5-6 primaries and I can occasionally see the difference. In the photo below, this Song Sparrow replaced the outer 5 primaries and retained the inner four. Take a look and see if you can notice the darker shafts of the outer feathers compared with the lighter brown shafts of the juvenal primary feathers. You might have to double click on the photo to make it bigger. 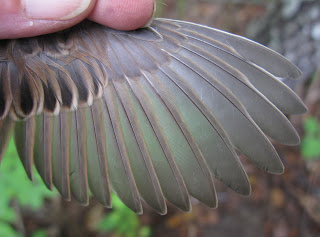 Yellow-breasted Chats are always enjoyable to capture and today we caught two, one male and female. I took a picture to compare the face coloration. The lores of the male are blackish (bottom bird) and dark gray in the female (top bird). 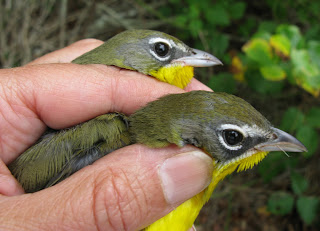 Winds were gusting on Saturday so no banding, but Gretchen and I did get out on Sunday. I thought the catbirds had pretty much passed through but we banded 35 new catbirds this day.
I've been wondering when the yellow-rumps (Myrtle Warblers) would show up and sure enough three appeared in our nets. In the next three weeks we will probably band at least 600 of them! 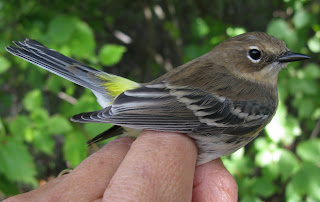 We had a Lincoln's Sparrow 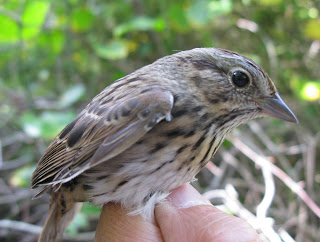 and I was able to capture a good example of streaking on the throat in this photo: 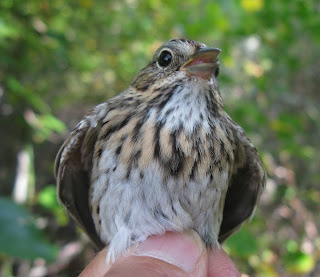 Our most exciting bird today was not the species, but the fact that it is our 20,000th bird banded on Wing Island since opening in 2000. This doesn't include other birds banded at other sites, but just on Wing Island. A hatch year Nashville Warbler! 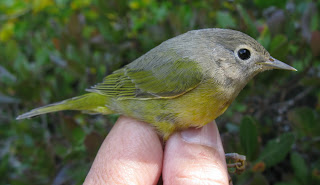