15-20 September
Numbers and diversity of birds slowed down a bit this week, but we still managed some nice birds!  There always seems to be a lull in numbers while Gray Catbirds decline and Yellow-rumps have yet to arrive. I didn't get back to the field until Wednesday last week due to family obligations Monday and Tuesday. I caught another Wilson's Warbler, a young male, but had such a well-developed black cap I thought at first it was an adult. Skulling the bird proved otherwise. 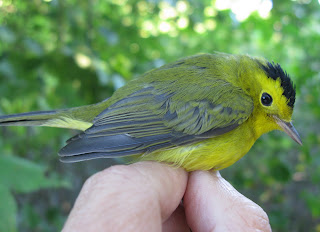 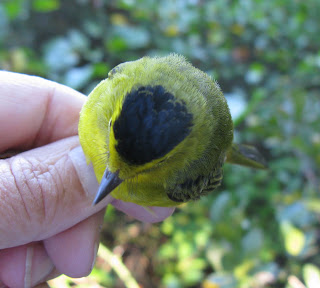 Three more Palm Warblers showed up this day, all Western Palms. We tend to capture more Western Palm Warblers (WPWA) here in the fall than the eastern counterpart, Yellow Palm Warbler. Western Palms are a bit smaller with back grayer and white belly contrasting with yellow undertail  feathers and throat. Typical behavior of Palm Warblers is tail bobbing and this bird was no exception as its tail bobbed the whole time I took pictures! 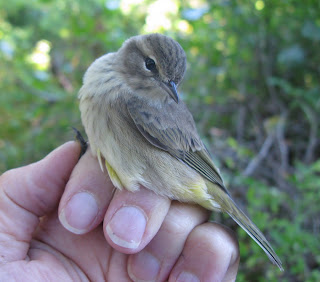 On Monday the 20th I captured a hatch year male Yellow Palm Warbler (YPWA) and took some pictures for comparison. You can see how much brighter and yellow he is. 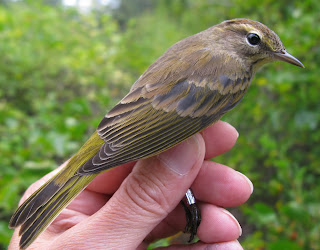 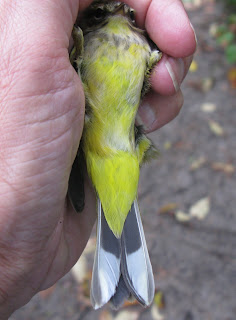 Normally I leave the sex for Palms as unknown, but this bird had a good amount of chestnut in the crown. 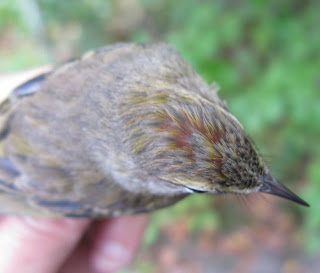 Juvenile Song Sparrows are now molting their body feathers and losing their buffy coloration in favor of more adult-looking plumage. 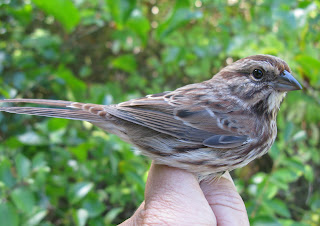 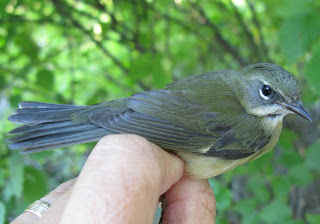 A very interesting bird today was an adult male Prairie Warbler (the same bird at the top of this blog) whose plumage was so orange he resembled the coloration of a Blackburnian Warbler! Must be those honeysuckle berries he's been munching on. I'll be curious to see what he looks like next spring. Prairie Warblers apparently molt only head feathers during their pre-alternate molt in the winter. We've captured him numerous times since first banding him in the spring of '08. Studies show the brighter the male, the more attractive he is to the ladies, so this bird may do very well next spring! 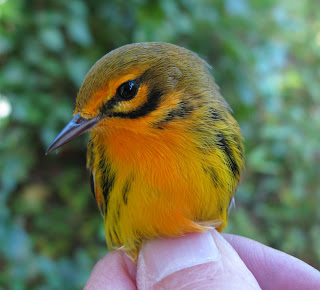 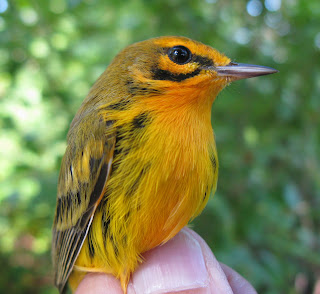 We've been banding numerous juvenile American Goldfinches since last week including this young male captured on Thursday the 16th. The body plumage of young birds is quite brownish. We tell males and females apart by the color of their wings, very black in males and dusky black in females. 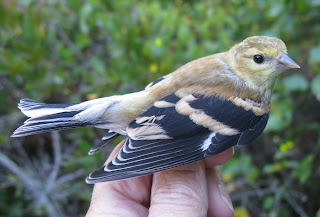 The bill color in first year Northern Cardinals is starting to change from brown to orange as seen in this young male. 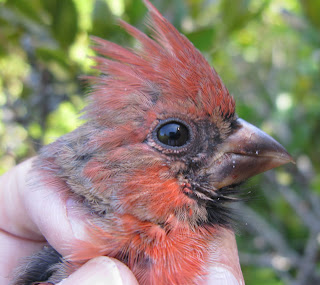 I had another hatch year Yellow Warbler, much brighter than last week. 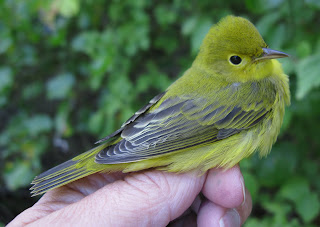 Four more flycatchers were captured this week (2 Traill's and 2 Yellow-bellied) including this Traill's with some kind of plant material I believe around it's legs. At first I thought it might be spider silk but there were seeds inside the material. I'd appreciate any thoughts on what this might be. I was able to cut the material off with scissors. The legs and toes showed no ill effects. 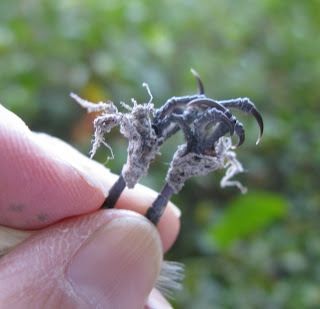 There was no banding on Friday due to rain. Saturday we had another successful banding demo with at least 40 people. Species diversity was down a bit from the one we gave last week with 16 species banded compared to 20 species the week before. The group enjoyed seeing our first Lincoln's Sparrow this fall.Notice the much finer streaking and buffier appearance compared to the Song Sparrow pictured earlier in this post.
﻿ 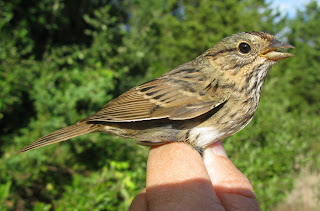 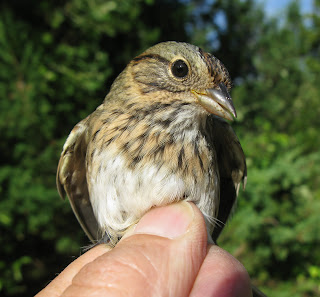 Jan Bridge, a participant in the audience provided pictures of a young male Yellow-shafted Flicker with a few orange shafts on the feathers (not quite visible in this photo), 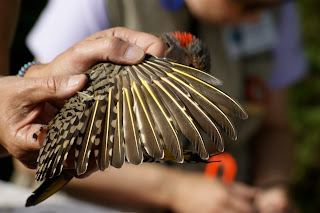 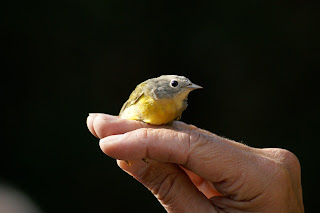 and a Red-eyed Vireo. 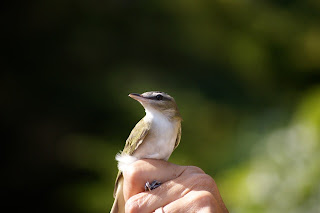 We had a Blackpoll Warbler and a Northern Waterthrush, but unfortunately most people had left before capturing the waterthrush. 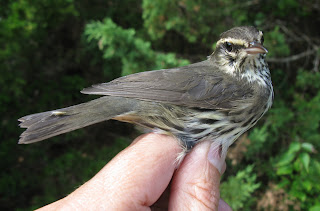 On Monday the 20th, our first Golden-crowned Kinglets came in. This bird is a hatch year female, with only yellow in the crown. 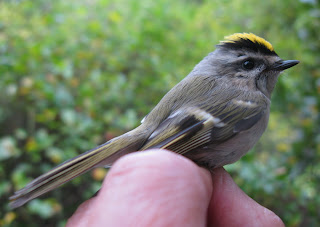 I also had our first Black-throated Green Warbler (hatch year female) show up this day, 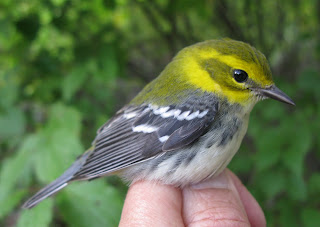 along with Warbling Vireo, a female American Redstart, Ruby-throated Hummingbird, and an Ovenbird (below). 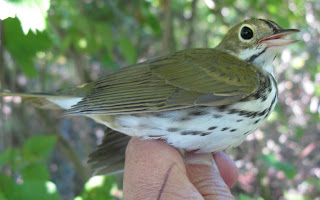 A big thank-you to all who helped with banding this week- Peter Brown, Carolyn Kennedy, Gretchen Putonen, and Jessica Rempel.
The following birds were seen, heard, or captured between 15-20 September. Numbers reflect captured birds only.

On what 'caught' the flycatcher...Milkweed fluff comes to mind, or possibly cattail fluff. Are either of these in the area? Very curious!

We shall see! I am having it analyzed right now and hopefully he will be able to ID the material. Most likely it was something that lined the nest. I will post the results if we find out anything.