More young birds found their way into the nets this week. Approximately 75% of new birds banded were all hatch years.
We captured our first Baltimore Oriole for the year, an older (ASY or after second year) female. This bird showed more extensive black feathering in the throat than we usually see in a female and could have been mistaken for a SY male in the field, but she did have a brood patch and a short wing. We tend to band quite a few orioles in summer. 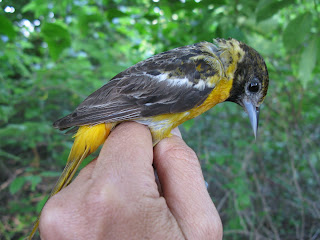 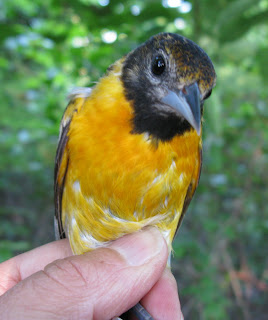 . While I haven’t found any long, pendulous nests of the oriole on the island I’m sure they are breeding there. I watched a male oriole chasing Blue Jays that were probably after young but couldn’t see the nest. During banding season I simply have no time to also look for nests.
Speaking of Blue Jays, we captured our first jay fledglings of the year. There were two caught together in a net and probably had fledged that morning as their feathers were growing in and one was still incapable of sustained flight. So cute! 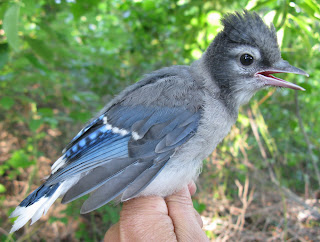 We may not like the fact that Blue Jays will predate eggs and nestlings of other bird species, but they are ecologically important birds. In spring jays consume large quantities of hairy caterpillars not favored by many other birds. Their claim to fame in the fall is their ability to regenerate oak and beech forests by burying acorns and beechnuts in the ground.
I can’t believe we missed capturing any Downy Woodpeckers all spring but finally on Tuesday we recaptured this male originally banded as hatch-year in July of 2006. 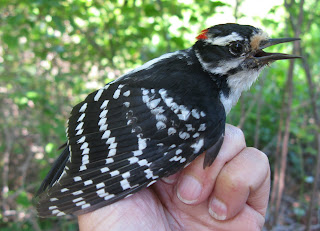 Woodpecker tails are very short and stiff which helps them maneuver on tree bark. Their zygodactylous feet (two toes in front and two toes in back) and short stubby legs also aid in climbing trees. 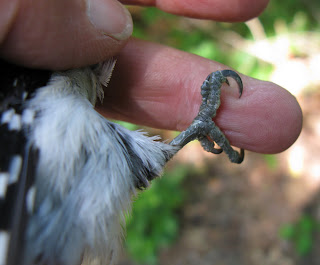 A sure sign this is a young Northern Cardinal (pictured below) is a brown bill. As summer moves into fall the bill gradually becomes orange and will be completely orange by winter or following spring. The red body feathers growing in indicate a male. Cardinals are notorious for hurting when they bite. Some net extractors will give the cardinal a stick to chomp down on while taking them out of the net. My husband Bill claims he can tell a young bird from an adult because the young will hold on to the stick and the adult knows the difference between wood and a finger and isn’t fooled by that trick for too long! 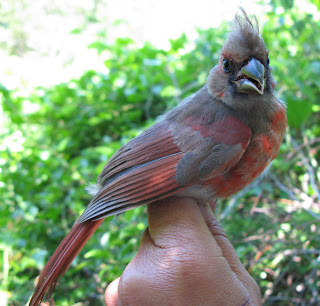 On Friday we captured a juvenile Tufted Titmouse. Both males and females look alike. 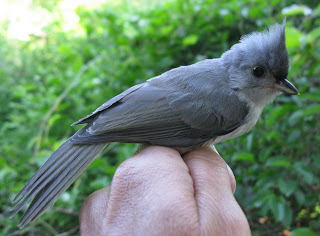 The ring around the eye is lime-green colored (top photo) and gradually changes to gray as the bird ages. (SY in spring -bottom photo). 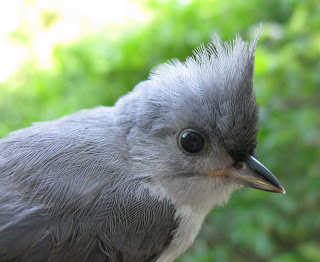 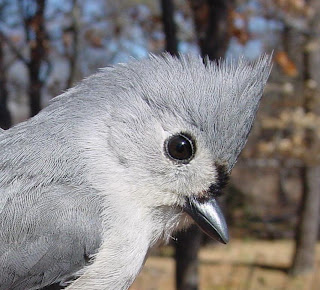 Another new species for the year was an Ovenbird we captured on Friday. This bird was a male in full breeding condition but most likely was not breeding on Wing Island. This species prefer large contiguous forests of at least 50 acres for breeding. We’ve captured many Ovenbirds in the past at our breeding birds banding site in the Punkhorn, an 869-acre parcel of town owned land in Brewster, but Wing is just too small in area to support breeding populations. 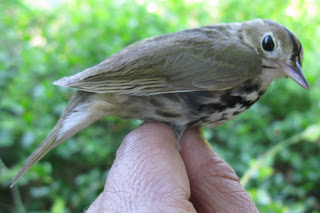 Both sexes sport an orange crown with black side stripes on the head. 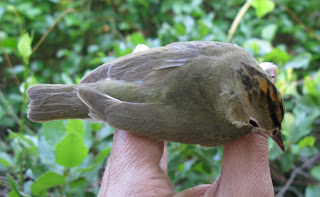 Ovenbirds have a loud, accentuated song which sounds like, “teacher, teacher, teacher!!!” They are secretive birds, however, so are not often seen in woodlands. Their large eyes are perfect for spotting insects typically found in leaf litter. The name comes from the shape of their nest said to resemble a Dutch oven. It is built on the ground in a shallow depression and is made from leaves, grasses, and other plants with a side opening.
We  captured two more hummingbirds this week, both adult females, along with chickadees, Carolina Wrens, Common Yellowthroats,  Gray Catbirds, and goldfinches not mentioned this week.

Thanks to Jennifer Dooley who helped out both days. The following birds were seen, heard, or captured from 15-18 June. Numbers reflect captured birds only:

Hi Sue,
Your blog is really great reading and viewing. You take excellent photos. I enjoy checking in to see what you're catching these days. Keep the updates coming. I just returned from 2 weeks birding in northern Montana. Saw my first Longspurs and thought they would be handsome to photograph if they'd sit still long enough. Hope you're feeling well and that you have plenty of help. Have a great summer.
Peter

Thanks for your comments, Peter!