Wednesday, 2 June - Saturday 12 June
The nets took forever to open on Wednesday morning and since I was alone this day I only opened a portion of them. Rain the night before made everything a soppy mess, nets and vegetation included. It was a quiet day with only 10 birds captured. With not much activity I closed early to weedwack net lanes. I did manage to capture a beautiful Cedar Waxwing, adult male, whose feathering never fails to impress me with its velvet-like quality. 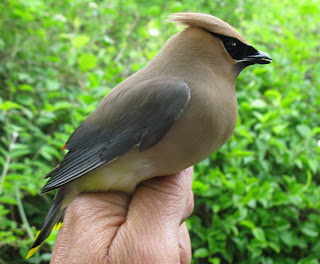 Male waxwings have extensive black feathering under the chin shown somewhat in the following picture(below top) compared with females (below bottom). 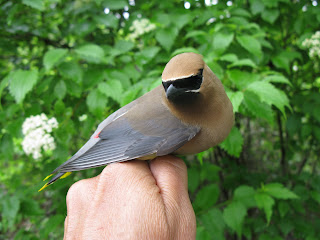 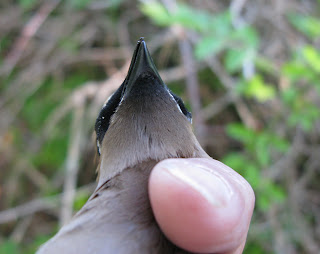 The red, waxy-tipped extensions to the secondary flight feathers of the male banded on Wednesday pointed towards an older adult which we would term ASY or after second year. A yellow band is apparent on the tips of the tail feathers with width being an indicator of age. The tips can occasionally present with an orange color depending on types of berries the birds consume. 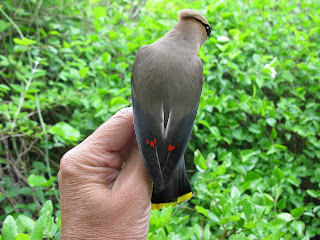 The red appendages are actually a pigmented  extension of the feather shafts. 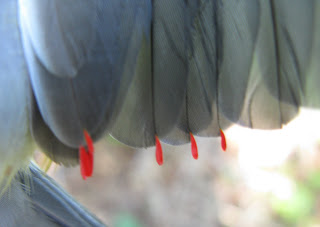 I captured four more Tree Swallows, one on Wednesday and three on Saturday. These birds spend most of their time in flight and their long wings are perfectly adapted for amazing acrobatics.They circle and glide grabbing insects while flying. 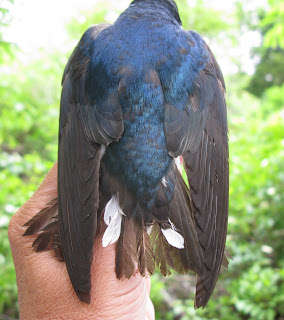 Tree Swallows don't spend much time on the ground perching instead on wires, bare branches, nest boxes, and one male likes to perch on top of one of the net poles! Because of this they have evolved with short, little legs. 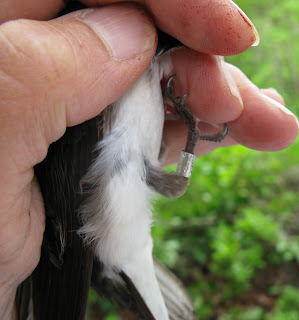 The first weekend in June was windy and wet so I didn't band again until  Monday the 7th. The best bird of the day was probably another Traill's Flycatcher. 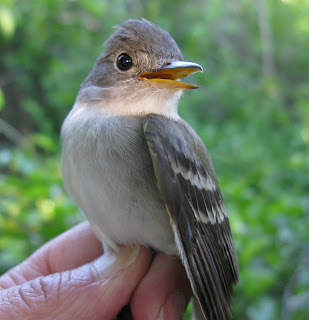 There are times when we come upon a net and encounter something other than a bird. We've had clam shells, frogs, June bugs, bumblebees, and sometimes mammals to name a few. How would a clam shell get into a net you may ask yourself? It can only be from a gull dropping it overhead I would imagine. So as I'm closing on Tuesday I saw something jumping around in the net on the bottom tier. Not a bird I told myself. When I got up to it I saw it was a squirrel. Good thing Gretchen isn't here I thought. Gretchen's been banding with me for the past eight years and she doesn't have a fondness for rodents. But I have to say she's been a brave trooper taking out meadow voles and chipmunks occasionally but they still give her the creeps. I don't have that aversion to them. Anyway when Gracie got near the squirrel it began shrieking so she immediately backed off. It wasn't really tangled and I merely had to pick up the netting and empty it out. Well much to my dismay instead of running away it crawled up my leg and onto my back til I let out a few shrieks myself and thankfully it jumped off onto a tree. I had a good chuckle thinking of what the scenerio would have been had Gretchen been there instead of me. It probably would have gone something like this, "OK Sue, I've had enough, I've weathered tick bites, mosquito bites, heat, cold, brambles, poison ivy, falling in canals, pouring rain, getting my boots stuck in mud so I can't move but I have to pull the plug when it comes to rodents!!"
I digress, onto birds.
Wednesday was fairly slow too but did encounter another female hummingbird, always a treat 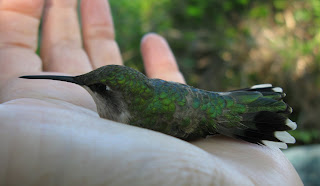 and Song Sparrows, robins, chickadees, Redwing Blackbirds, and a Carolina Wren. They are the squirmiest birds in the hand. I was lucky to get this picture. For many years I've pulled ticks off birds for a study of birds that act as hosts for pathogens causing human disease. I did this in cooperation with entomologist Dave Simser, the Barnstable County Extension tick man. The tick program lost its funding so for the past and current season ticks are removed from birds for Yale University. They are looking for different strains of Borrelia, the spirochete that causes Lyme disease, because it is their belief that different strains are more virulent causing people to become sicker. I've been finding quite a few ticks this past week. Here is a robin with a tick in front of its eye. If you look closely to the right of the eye and below the white clump of feathers you might be able to see a small gray lump. That is a nymphal tick. They favor moist areas such as the gape (side of the mouth) or the eyes. 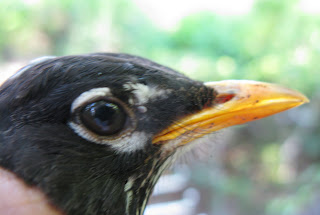 Birds that spend the majority of their time on the ground such as robins, Carolina Wrens, Eastern Towhees, Song Sparrows, catbirds, Common Yellowthroats, and Hermit Thrushes are more susceptible to these parasites.
Bird numbers picked up on Saturday with 50 birds. That is the highest number of birds we've ever captured in one day in June. And we had our first babies! This is also the earliest we've had hatching years (juvenile birds) in the nets since I started banding on the island. I think it was because of the beautiful warm spring we had and not many broods were lost to cold and rain. Here is a picture of a mother chickadee and her baby: 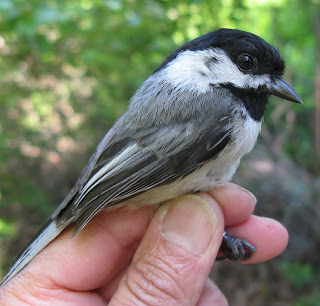 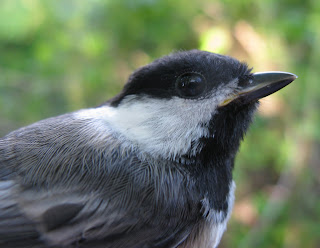 The yellow gape is still visible on the chickadee baby.
We also had a baby cardinal, which I neglected to get a picture of, a House Finch (pictured below) of unknown sex as males won't start to attain red plumage until their first prebasic molt, 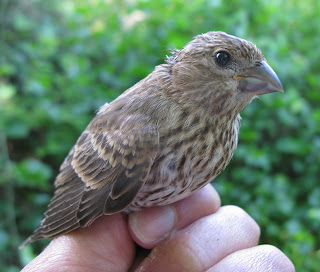 and numerous Song Sparrows. Song Sparrows have relatively long tails and this newly fledged youngster's tail was still growing in 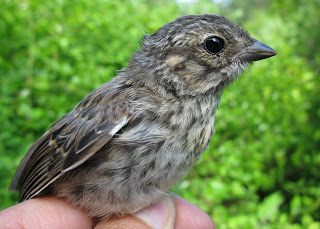 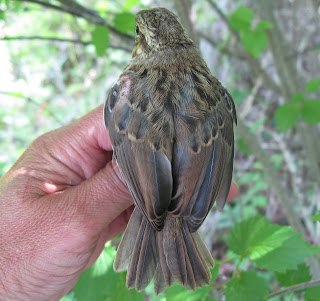 The babies and moms are banded and measured as quickly as possible. We bring young birds back to the same net where they were caught in case they are still dependent on an adult. If a parent is caught with them we release them all together.
Thanks to Gretchen for helping with banding on Saturday. The following birds were seen, heard, or captured from 2-12 June. Numbers reflect captured birds only:
Total birds:  93                            Total species:  46
Total banded species: 17              Birds/100 net-hrs: 22