I returned recently from a wonderful trip to the Grand Tetons in Wyoming. The beauty and expanse of this special placed really moved me and was a perfect place to renew your spirit! Gretchen banded on 26 June while I was away and we banded again on 2 July. She captured 3 new species for the year, one Barn Swallow, an Orchard Oriole, and an Eastern Phoebe. Most of the birds both days were first years and this will be the case for the remainder of summer and fall. The numbers of birds in nets increased dramatically by July 2nd with 95 birds processed. We typically see numbers like this towards the end of July as more birds fledge, not the beginning!


Here is a young Barn Swallow that was banded on the 26th. 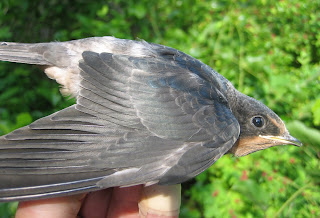 We banded 7 more of them on July 2nd. Barn Swallows have rusty colored underparts compared with the bright white undersides of Tree Swallows. 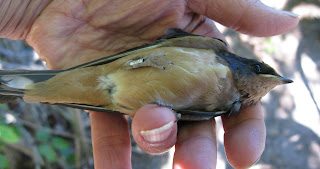 They also have white spots on their tail feathers visible in the  photo below. 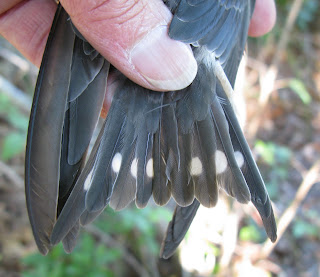 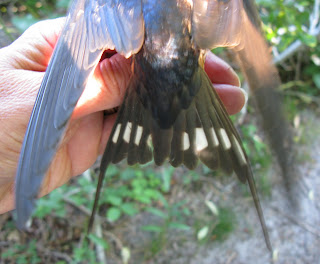 We captured two Orchard Orioles, one on each banding day. Juveniles of both sexes look similar but we can usually determine sex by the length of their wing. Both orioles banded were females. The picture below shows a female in the spring (SY or second year). Males look quite different and one of these days I hope to capture an adult male in breeding plumage. 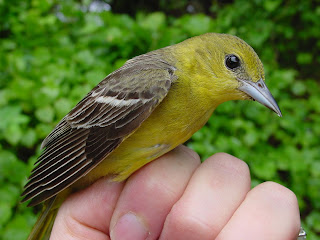 We banded our first  hatch year Baltimore Oriole on the 2nd, also a female. 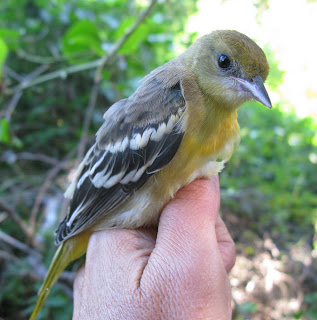 Other baby birds from the two days include an Eastern Phoebe. Young phoebes have buffy edging to their median and secondary coverts as seen in the photo below. As adults this appears as grayish to whitish. 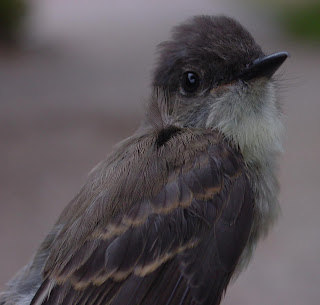 Below is a baby robin who will soon replace the spots  on its breast  with rusty orange feathers when it begins its first prebasic molt. 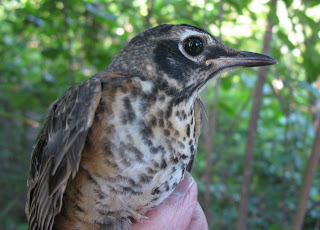 We captured a very young Prairie Warbler on July 2nd. Occasionally very young birds are hard to identify! These birds are referred to as Local rather than Hatching Year because their feathers are growing in and can't sustain flight. As I mentioned in a previous post, all our young birds are taken right back to where they were found in case they are still dependent on parents. 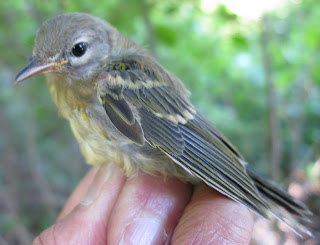 We captured a second year (SY) male Common Yellowthroat who was without a full black mask as seen on most adult males (see previous post May-Banding Demonstration). Hopefully he'll develop a full gorgeous mask during his molt this summer.  Don't think he was too happy with being banded either as he was telling me what he thought of the whole process! 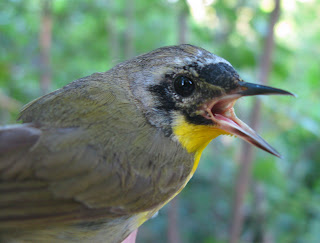 I'm not sure how much banding we'll do this summer. If it remains hot and humid as it has been the nets stay closed! Sometimes we can get a few hours in (5-8:30) before it heats up.
Thanks to Gretchen Putonen who manned the station on the Saturday in June while I was away and banded with me on Saturday July 2nd. We also had help from the Johnson family on the 2nd who come every summer, Sheryl and her daughter Lauren. The following birds were seen, heard, or captured.  Numbers reflect captured birds only:
Total birds: 124                            Total species: 37
Total banded species: 19             Birds/100 net-hours: 51