10-27 October
October is always a busy month at the banding station and this month was no exception. We've banded more birds so far this fall than any other year. By the 10th Yellow-rump Warbler numbers exploded as usual at this time of year and we continued to band many of them until their numbers waned on the 26th. We banded another Gray-cheeked Thrush on the 10th, this one being much lighter in color than the one on the 6th. 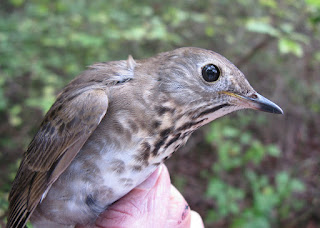 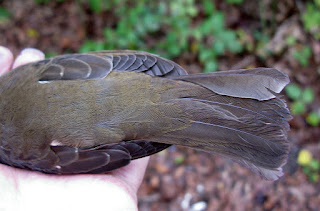 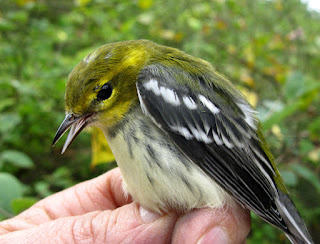 On the 12th we had many birds of 25 species, one of our best days for diversity. We were surprised to find Cedar Waxwings still in full juvenal plumage. 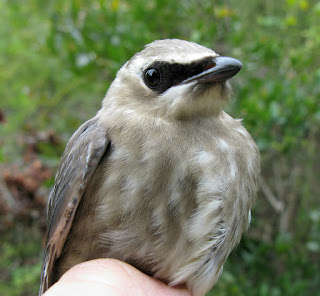 It was our first day of Marsh Wrens for the fall caught in the same net, one being exceedingly smaller than the other one. 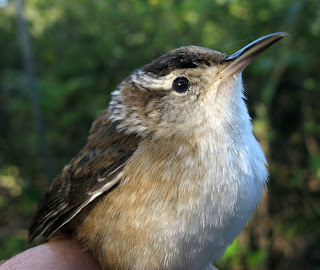 The plumage coloration on the back is quite stunning. 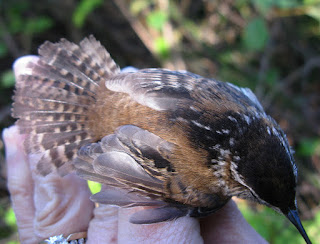 We finally banded a Winter Wren after two escaped right out of our hands. Wrens are certainly wiggly creatures! 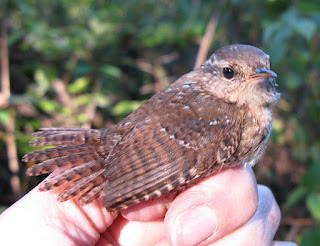 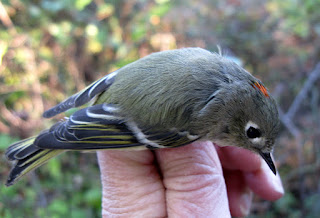 He had spongy material wrapped around his legs, I've shown this before on other birds, and it turns out to be spider webbing. I was able to clip the webbing easily off his legs. 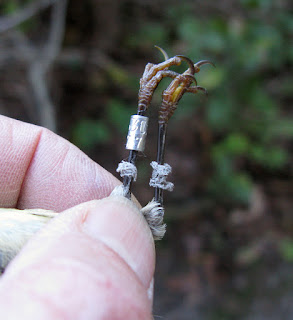 On the 16th I joined James Junda, who runs the South Monomoy Banding Station, and his crew to band Saltmarsh Sparrows on North Monomoy. We arrived near high tide. Those working for the refuge had never seen it so high. 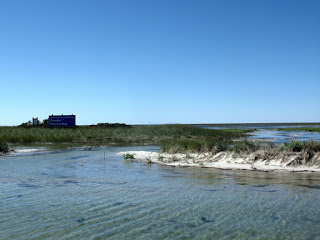 We scoured the area to determine the best place to set up nets. 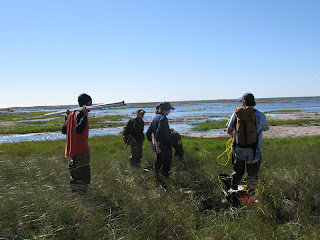 Here James is ageing one of the sparrows captured. 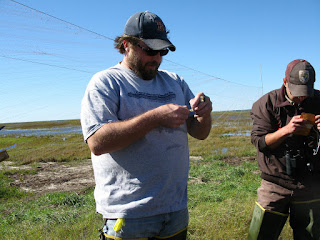 Saltmarsh Sparrows have perfect coloring to fit into the salt marsh, the bird below happens to have some leucism (some of the feathers lack melanin and appear whitish). 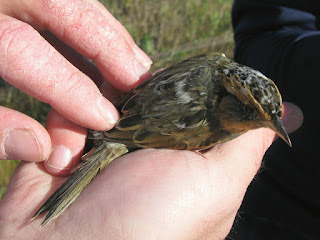 These sparrows have very pointed tails. This HY bird is showing off his juvenal tail feathers, they are almost translucent. You can see why this species used to be called Saltmarsh Sharp-tailed Sparrow. 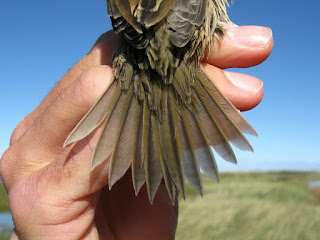 Most of the young European Starlings have now molted into their formative plumage and look more like adults in basic plumage such as this one captured on the 17th. 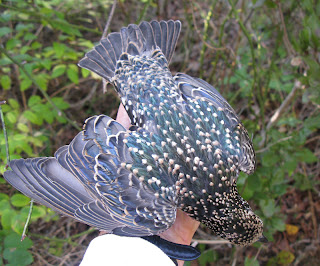 This bird had a few retained juvenal feathers along with juvenal central rects which have an indistinct edging. 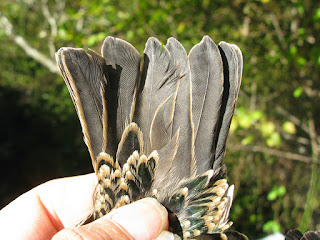 He was sexed as a male due to the brown iris. 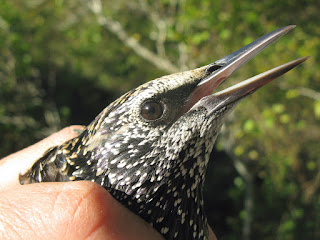 At this time the majority of HY Carolina Wrens 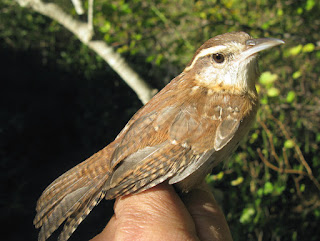 have gone through an incomplete molt as seen in the photo below. The blue arrow points to the pointed, abraded primary coverts and a molt limit is seen between primaries p2 with its light brown shaft and indistinct barring and p3-p9 with dark brown shafts and distinct barring. Clicking on the photo will make it easier to see. 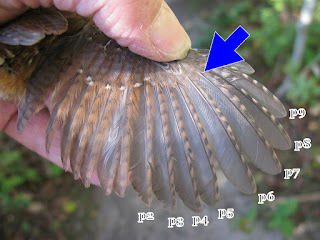 Compare that to an adult wing below with rounded primary coverts (blue arrow) and distinctly barred primary and secondary flight feathers. 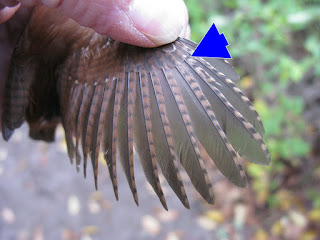 We captured our first of the fall Eastern White-crowned Sparrow on the 17th. The plumage coloration easily identifies it as a first year bird. 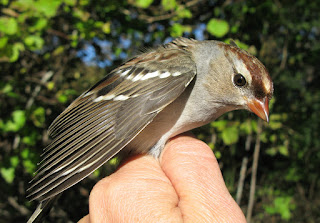 This bird had molted all of its greater coverts with a molt limit at the alula covert. 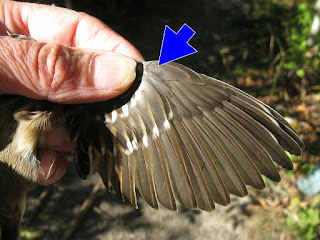 Luckily we had a large group helping on the 21st, our biggest day, with 251 birds handled, 177 of those were yellow-rumps and one late Ovenbird. Another Lincoln Sparrow was banded on the 23rd 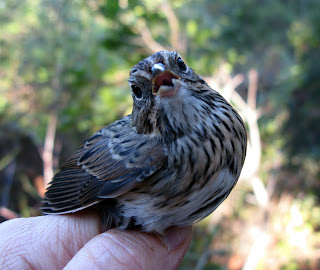 along with a very late HY female Wilson's Warbler, 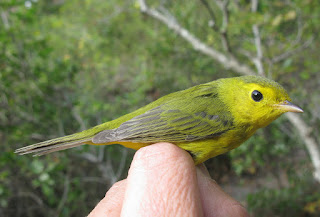 their fall presence in Mass usually ends the last week in September. 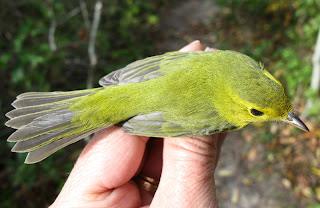 Red-breasted Nuthatches are heard all over the island but we don't capture that many compared to how many I hear! This HY female is showing off her new body feathers and older retained flight feathers. 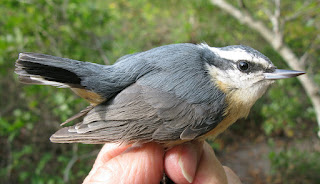 The following day, the 24th, our first Sharp-shinned Hawk was captured, a HY female. First year birds can be identified by the vertical breast streaks and yellow eye. Her long wing identified her as female. 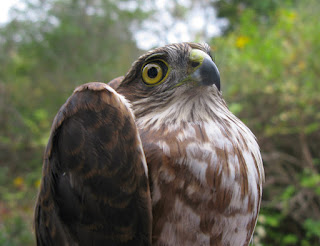 House Finches have also finished molting now making it easier to sex males with their reddish plumage on the face, breast and rump. 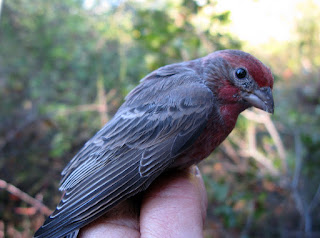 These finches can be told apart from Purple Finches by the streaking on the undertail coverts. 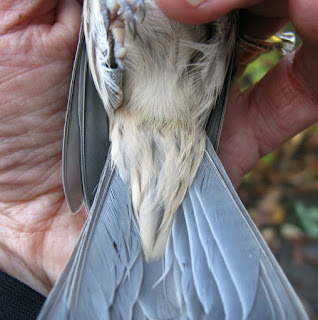 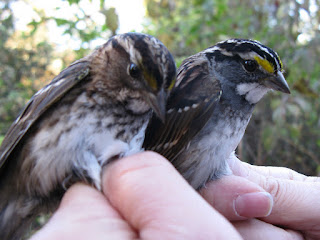