We had a great first week of October with many species and lots of birds coming through. We were rained out a few days but still managed a decent assortment. The Eastern Phoebes have passed through for the most part, but catbirds are still here in good numbers. The catbirds are usually gone before high numbers of yellow-rumps come in, but not this year! They must have had a really good breeding year as our catbird total for the year so far is over 1,000 birds. We normally band between 500-700/yr. Our first Myrtle Warblers (yellow-rumped)  showed up on the 2nd with just a few birds but as the week progressed so did their numbers. 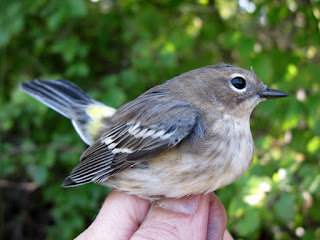 Also on the 2nd was a Traill's (probable Alder) Flycatcher that we banded a week before. It had added quite a bit of fat and weight and probably was ready to take off soon. Warblers this day besides the yellow-rumps included Nashville, Black-throated Blue Warbler, more Blackpolls, Ovenbird, and Western Palm Warbler. Besides Song Sparrow, we are banding more Swamp Sparrows now and another Lincoln Sparrow. A  second year female Yellow-shafted Flicker was banded in early afternoon, they are so large they often escape our nets. 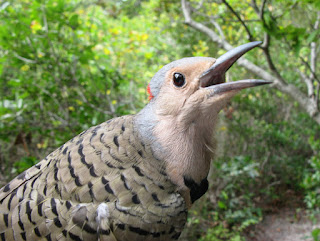 During their molt in their second year, woodpeckers will replace some outer primary coverts but retain the inner ones. 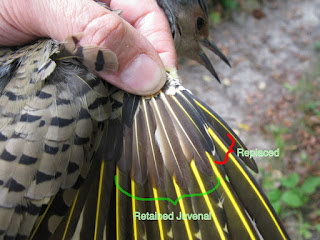 In their 3rd year, they will replace all their primary coverts but might retain one or two juvenal feathers randomly placed. This female Hairy Woodpecker below was recaptured on the 7th and was originally banded as a hatch year in Novemeber 2010 so she is now in her third year. 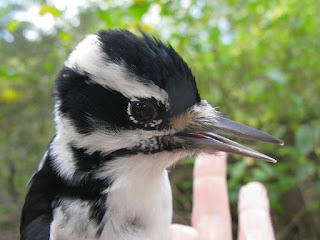 The yellow arrow points to the browner retained juvenal feather. 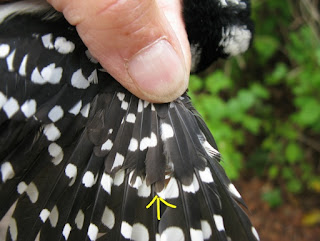 We had 17 species of birds on the 5th ; our first Brown Creeper of the season and 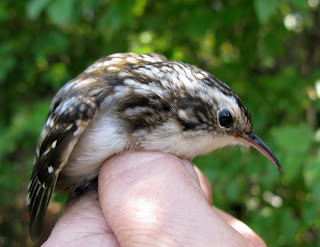 two Hermit Thrushes, one with a particularly bold eyering. 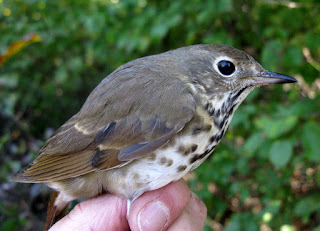 The reddish tail feathers contrast sharply with the back. 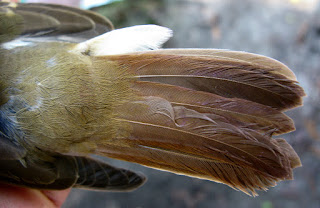 They were both hatch year birds with buffy edging to the greater coverts that travel up the vein. 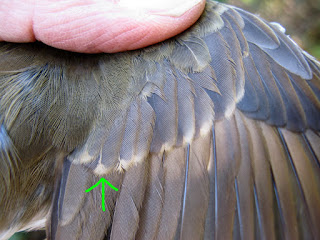 While I had been hearing Golden-crowned Kinglets around the island since September 27th, we didn't capture any until the 5th when we had four birds. 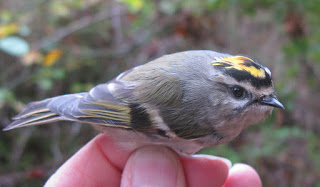 The male is so pretty with his orange and yellow crown. 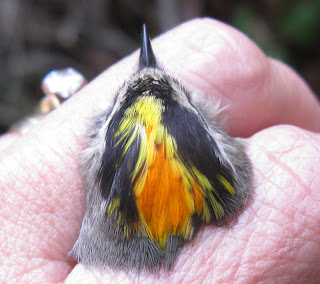 The female a bit more subdued with only yellow coloration. 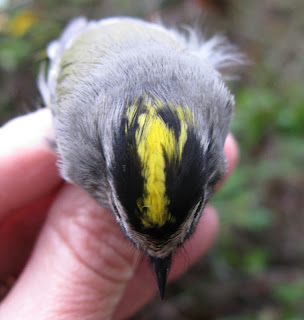 A great surprise on the 5th was capturing two Scarlet Tanagers, a bird we rarely get in our nets.We had one in 2002, two in 2009, one in 2010, and now these two this year. Fortunately we had one of each sex for comparison. Both birds were hatch years. The female has olive-green plumage and greenish-dusky wings. 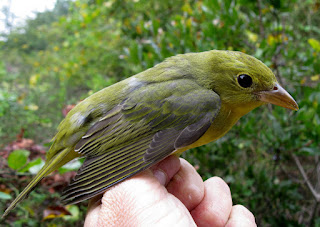 The young male also has olive-greenish plumage but his wings are black. 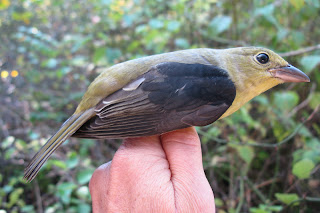 The Scarlet Tanager has a distinct tooth-like structure on the upper mandible possibly to help with mashing the fruits and seeds consumed. 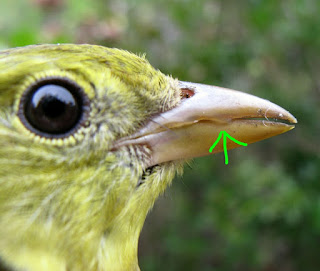 This young Blackpoll Warbler we caught on the 5th 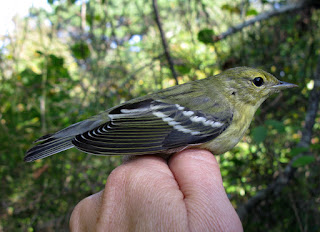 had a deformed foot caused by a probable pox virus. We then clean our equipment so we don't spread it to other birds. 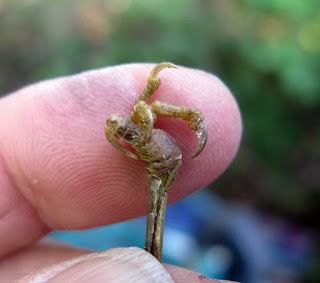 We usually find a bird with leucism every year, especially in the fall on hatch year birds. Leucism is when just some of their feathers lack melanin and no color is produced like the feathers on this chickadee. Some of its head and back feathers were white. 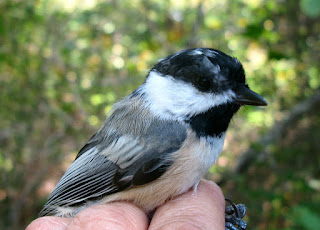 We had an even better day on the 6th when we handled 132 birds of 24 species. Highlights from this day were a Gray-cheeked Thrush 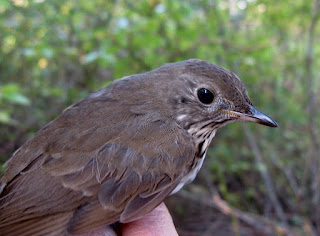 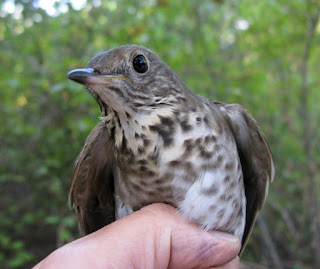 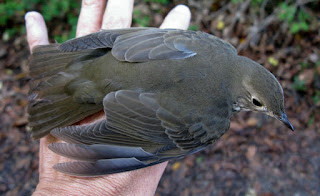 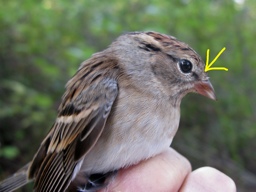 and the gray rump contrasting with the brown back. 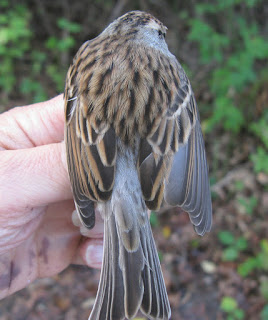 Our first junco appeared on the 6th, a hatch year female. 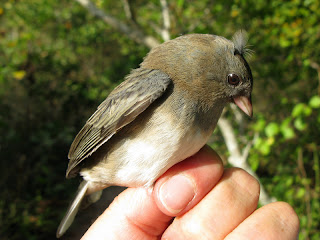 But I think the best bird of the day was Yellow-billed Cuckoo, not one but two! 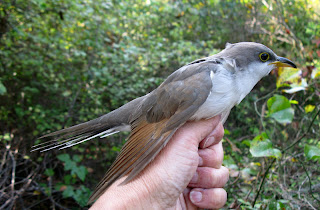 The orbital ring is yellow in the hatch year birds and will turn dusky as the bird ages. 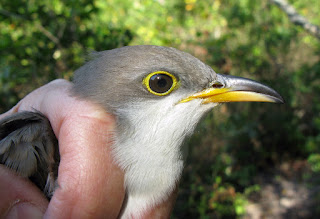