April began with a mad dash to finish up net mending, always a tedious chore, but the majority were done that were usable. The beginning weeks were then spent clearing net lanes of winter debris and installing nets. Our first banding day was on the 14th. Keenan Yakola joined me for the morning. We had a good start to the spring season with 31 birds captured, a decent day for our site in early spring. Winds picked up late morning and switched to NW from SE so we closed nets as a front was approaching. Probably the excitement of the morning was flushing two Blue-winged Teal from Paine's Creek, a species not seen there before. There was also a Snowy Egret in the salt marsh the day before, patiently waiting to snatch a herring on its way up to the run.

It appears to be a good year for migrating chickadees. 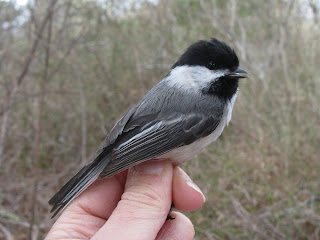 We've had good numbers this month with many showing signs of fat, indicating they are taking off for greener pastures! None of our previously banded chickadees had any fat, but most of the new ones we banded early on had a good amount of fat. One of those, a second year bird (SY) also showed signs of leucism, which simply means a defect of some sort preventing the deposit of melanin in the feather. The back feathers on this chickadee aren't solid gray but a mixture of gray and white. I find this most often on younger birds, the bird below was born last year. 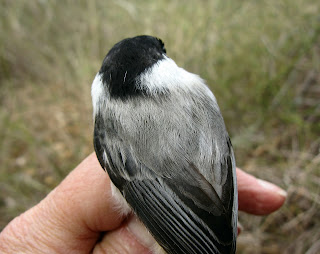 A chickadee captured on the 30th was 7 years old, we first banded her as a hatch year (HY) in 2006. We've captured her every year since then, mostly in the same area, 27 times total! ﻿
Our only Golden-crowned Kinglets captured were on the 14th, we could hear them all over the island that morning. 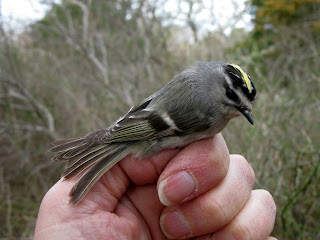 They were both females, with only yellow and no orange feathers visible in the crown. 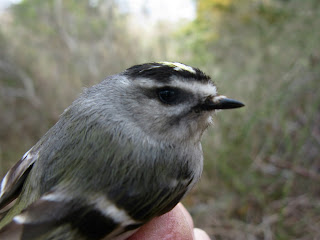 Cardinals also dominated our morning of the 14th, all males. 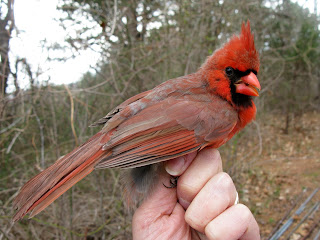 This species can be difficult to age. Cardinals can do a complete molt during their first year, replacing all feathers just like the adults. Sometimes they skip over a few feathers allowing us to age them as SY at this time. The bird below did not replace secondaries 2, 3, or 7 (indicated by black arrows). They appear browner in the photo. 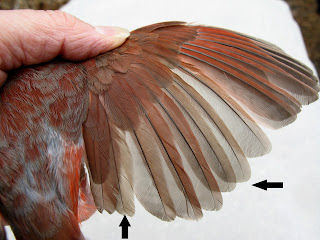 Another cardinal had something wrong with his beak on the upper mandible (possibly avian pox) and the end was breaking off. I did have a Pine Warbler once where we noted the tip had broken off and a year later it had grown back. We were able to see a line where the new growth started. 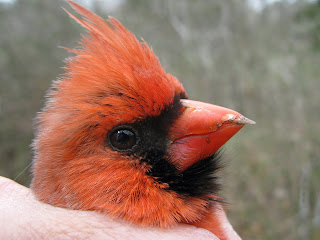 I had another cardinal with beak issues on the 29th, parts of the beak seemed to be peeling off. 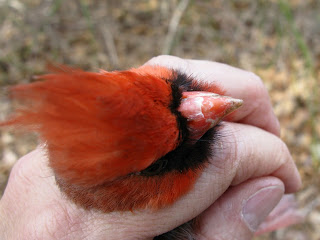 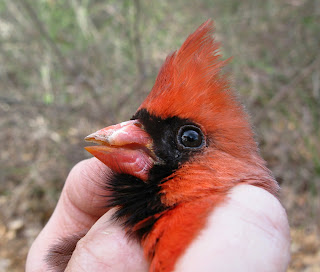 White-throated Sparrows were captured on the 18th and 30th all brightly colored birds. 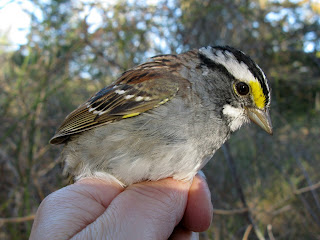 We also captured a bird we don't get very often on the 18th, a Brown Thrasher. 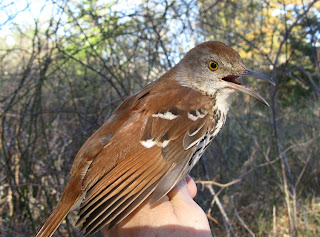 These birds belong to the Mimidae family, or family of mimics, along with catbirds and mockingbirds. They have a large repertoire of song, singing the same song twice, making them easy to distinguish between the other species. Unfortunately their numbers seem to be declining and our over abundance of catbirds seems to push them out of an otherwise attractive habitat for breeding. This up close photo shows the beautiful yellow eye. 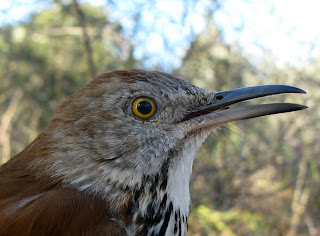 We recaptured a Blue Jay banded as a young bird in 2012. Both male and female Blue Jays look alike but we were now able to identify her as a female as she was just starting to show a brood patch (her belly had dropped its feathers). Thank-you to Jo-Anna Ghadban for taking the jay photos as I left my camera in the car. 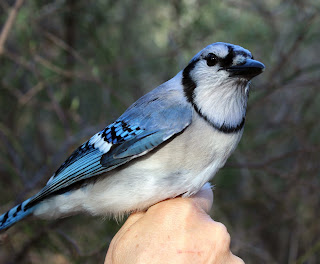 She was aged as a SY due to the retention of juvenal primary coverts (no black barring). 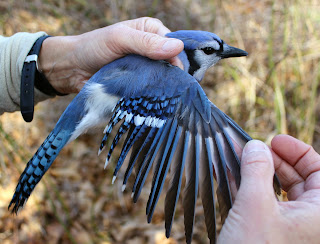 The best bird of the month had to be the Worm-eating Warbler, which showed up on the 29th! This was only the 2nd to be banded at our site, the other appearing on April 25th, 2009.

Growth bars were evenly visible across the tail as well as across the wing indicating the feathers were grown in at once so the bird was aged SY. 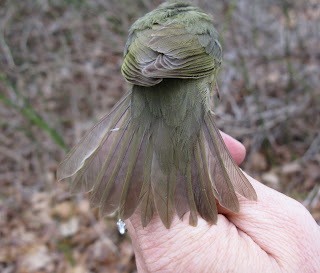 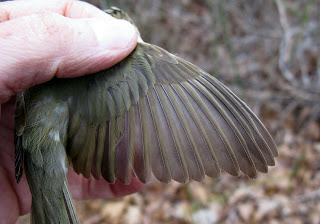 If you find these links helpful, maybe you could share them with your readers.

P.S. How amazing that you've caught that same chickadee year after year!