And they keep coming....

Catbirds, catbirds,catbirds- man, have they had a productive year! We've had more 100+ bird days  late July/August this year than ever before and many days I have to keep half of our nets closed to keep up with all the birds.

We banded three more days in July after my last post on the 21st, 26th and 29th. I heard from the Bird Banding Lab again that another one of our birds had been found. This time a Gray Catbird, orginially banded as a young bird on 21 August 2010, was found dead in Orleans. Not sure how it died but I appreciate people taking the time to report the band.

Below is pictured a young Black-capped Chickadee, caught on the 21 July, officially our 25,000th banded bird! 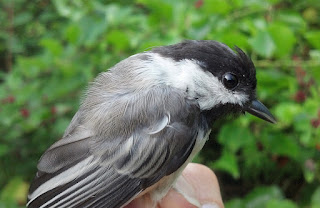 Also on the 21st was our first of year House Wren, a juvenile, 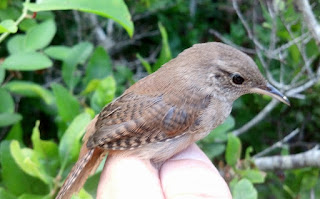 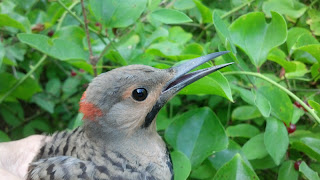 and an early migrating Black-and-white Warbler. She may have bred in the Punkhorn Parklands, a large forested area in Brewster, and then flew to Wing Island  to go through her molting period. 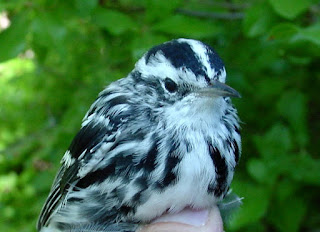 I've had the pleasure this summer of teaching a college student, Ben Lagasse, the fine art of banding. He's been volunteering one/two times a week at the station and is presently working on extracting birds. On the 26th while he was at one net working on a catbird and I was getting out a Common Yellowthroat nearby, I heard yelling coming from his direction and seriously though he was being attacked by something! I quickly headed over to him and found a large Cooper's Hawk in the net right next to him. I quickly held her legs and removed her. Banders need to be aware at all times of the talons as they can cause injury. I handed over the Coop to Ben and he was quite brave to hold her as he hasn't been handling birds all that long. I finished clearing out the remaining few nets and we headed back to band her. Measurements and pictures were taken. Females are quite a bit larger than males. As I was looking at her wing trying to assess her age I must have loosened my grip a bit and BAM, I got footed! You can imagine how fast I let her go. I hope I never make that mistake again. Regardless, it was exciting experiencing a bird of that size and our first ever Cooper's Hawk to boot! 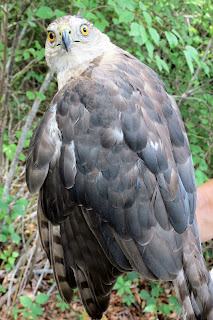 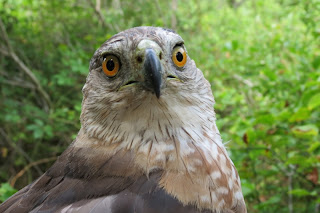 The 26th also brought our first young Cedar Waxwings, with their mottled appearance of the breast. 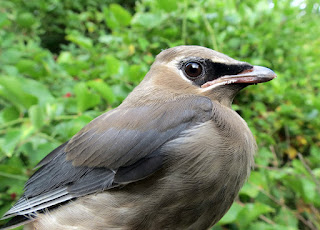 This one had orange-tipped tail feathers, usually yellow. 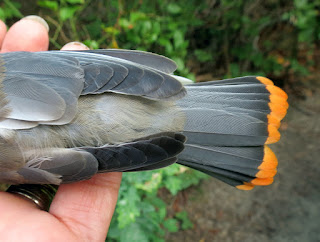 Eastern Phoebes have fledged from their nesting sites and many are showing up now on the island. The young birds have cinnamon colored edging to their wing coverts. You might notice my bandaged fingers from my hawk experience! 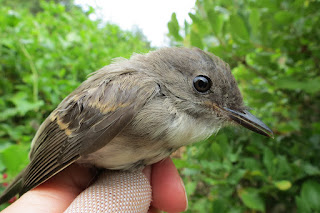 We've been hearing Eastern Kingbirds all around us with their calls sounding like sparking wires. Our first captured kingbird, an adult female also appeared on the 26th. Don't they have huge mouths? All the better for capturing insects on the wing. 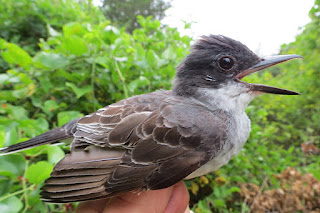 Many of the young Baltimore Orioles are molting into formative plumage. 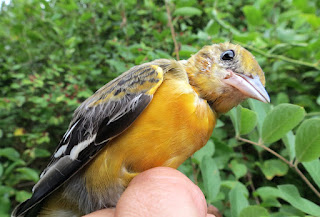 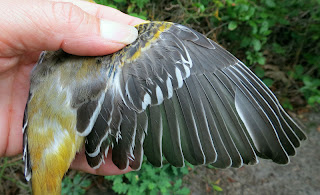 July 29th proved to be our best day this summer, with 170 birds netted of 16 species. The majority of birds were catbirds of course (69), along with robins (24), Song Sparrows (21), chickadees (11), Baltimore Orioles (9), phoebes (7), and waxwings (6). We had a smattering of other species including our first Orchard Oriole for the year, a young male, pictured below. 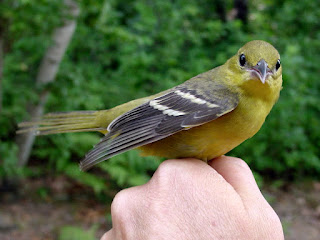 As we come into August the majority of Yellow Warblers,one of the earlier fall migrating warblers, have now passed through. 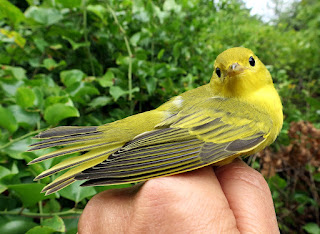 We don't capture that many Great Crested Flycatchers, but we did get this juvenile on August 1st. 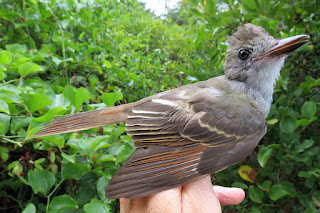 Like phoebes, juvenile Great Crested Flycatchers have cinnamon colored edging to their coverts, which will have white edging as they replace them during their first prebasic molt. 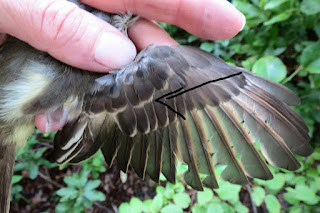 I'm still waiting on American Redstart and Northern Waterthrush, two species we've normally captured by now for fall migration. We've had a lack of Empidonax flycatchers but did capture a Traill's (probable Willow) on the 14th. 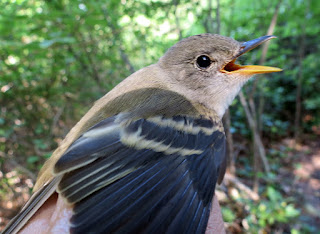 We'll see what the next two weeks bring! I'd like to thank Ben Lagasse, Gretchen Putonen, Judith Bruce, Carolyn Kennedy, and Jessica Rempel for helping out at the station for the past month. The following is a list of birds seen, heard, or banded during this time period.