17- 29 August
Our crew will be holding another banding demonstration this Saturday (9-15) for anyone close by who may be interested in seeing birds up close! Meet at 8:15 at the front door of the museum and walk out to the solar calendar on Wing Island. Rain cancels.

The last two weeks of August were very busy, lots of birds in nets and good diversity of dispersing birds who breed in the vicinity. Eastern Kingbirds were all over flycatching and vocalizing. On 17 Aug we captured four of them and I was able to take pictures of the outer primary (p) feather of an adult male, adult female and a hatch year bird for comparison. The tip of p10 of an adult male is notched and very pointed as pictured below. This feather is quite worn so is not as pointed as it would be if fresh. 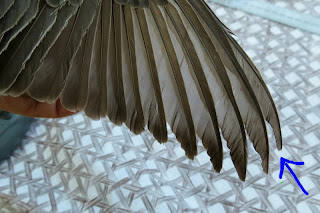 In the female p10 is not as deeply notched and the tip is less sharp. 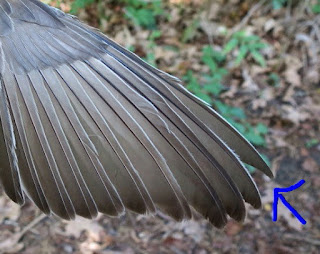 P10 in a hatch year is not notched. 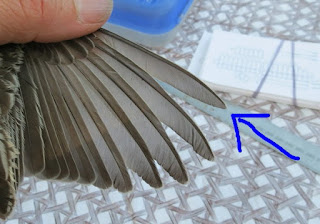 Woodpecker molt is more complex than most species we capture so it is important to have a good understanding of what sequence they follow in order to age them appropriately. During this time period we captured numerous woodpeckers going through various stages of molt. On 24 Aug we recaptured a Hairy Woodpecker who had just finished her yearly molt. 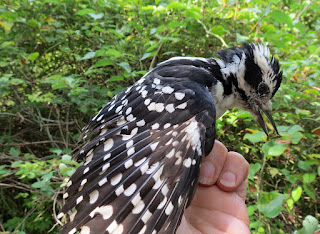 She was originally banded last year as a HY (hatch year) bird. During that time she replaced her greater coverts and primary feathers, but no primary coverts (pcovs) or secondaries. During this molt she replaced her primaries again, the greater coverts, her outer primary coverts now black (orange arrow). She retained her inner pcovs (green arrow) and has retained two secondaries (blue arrow). 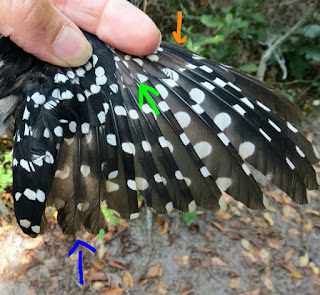 On the 17th we recaptured a Downy Woodpecker (a year older than the Hairy), who was first banded in 2010 as a HY bird so he is now in his third year. In the picture below you can see he is replacing his primary feathers indicated by the blue arrow. He is also replacing the corresponding  primary coverts,except it appears he is not replacing the corresponding covert to p7, which is brown compared to the ones on either side (orange arrow). 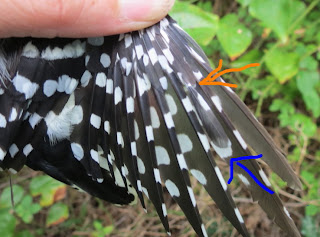 It is possible he may continue to retain one of these feathers, which apparently is rarely seen but could help to age them into their 4th year. Hopefully we will recapture him again next spring and can see if this indeed is the case.

We've had more Eastern Phoebes this year than ever before, all of them HY birds. 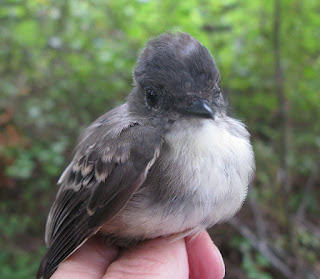 They too are starting to molt their body feathers and some of their wing feathers, specifically the lesser coverts, median coverts and greater coverts. The body feathers on their breast are coming in yellow and the replaced greater covs are now a darker gray with a whitish edging (blue arrow) compared to the browner juvenal covs with a buff edge. 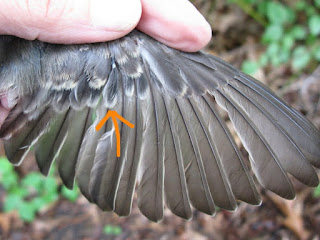 More molting birds include this adult Northern Cardinal. He looked so funny with his feathers every which way I just had to take a picture. 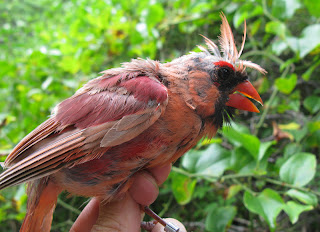 And I loved his bright red 'eyebrows'! 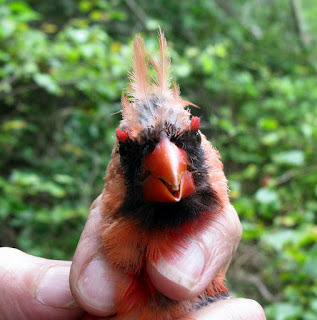 Also on the 18th was a young Gray Catbird 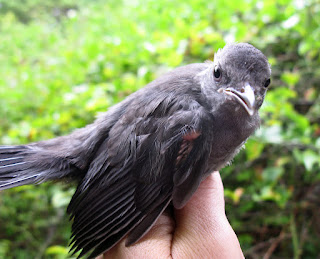 who presented with a growth on his upper wing. It had a hole in the top, which leads me to believe it was some kind of parasite, maybe blow fly, which burrowed into the skin, but has now emerged. 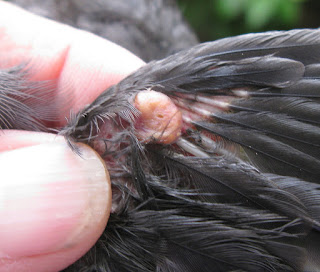 On the 22nd we picked up another adult Brown Thrasher, 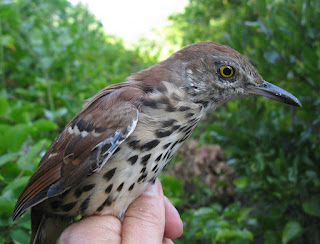 a HY European Starling, also molting, and yelling as usual, 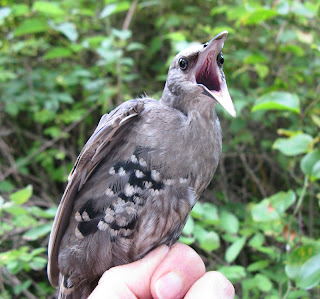 and our first of the season Red-eyed Vireos. 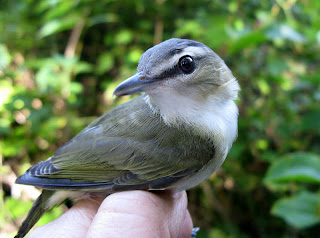 Vireos have a hook at the end of their upper mandible and HY Red-eyed Vireos have brown eyes. By next spring the eyes will be red. 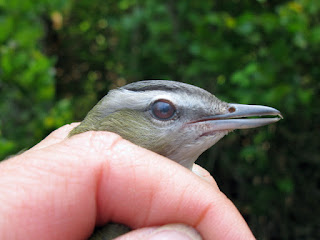 I was delighted to host the Monomoy banding crew for a couple of days before they headed over to South Monomoy to band for fall migration. From right to left- Keegan from Pennsylvania, James Junta, currently in grad school at McGill, Aviad and Ayla from Israel. 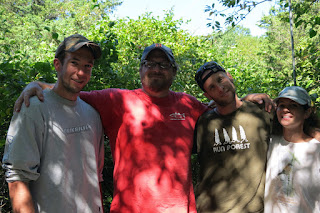 The Israeli ringers have never been to the states so were delighted to be introduced to a number of species including their first bird, which was a Great Crested Flycatcher, chickadees, kingbirds, and their first Yellow-breasted Chat (below)! 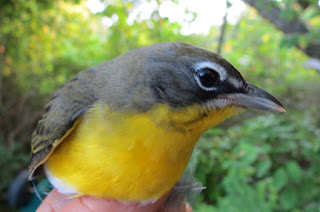 They came again on the 29th sharing with us special Israeli coffee that they brewed right out at our banding table. 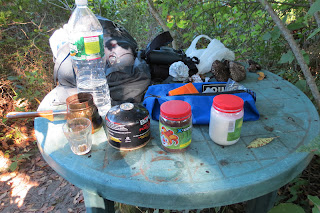 It was great having all of them! 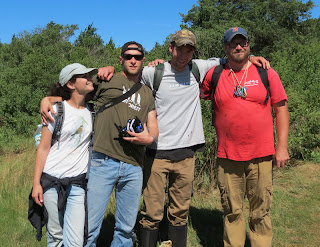 I've also been fortunate to have the Johnson family help out for the past two weeks. Mom, Sheryl and daughters Lauren, who is headed to Wellesley college as a freshman, and her daughter Kristen. Lauren had loads of practice this week extracting birds with so many found in our nets. 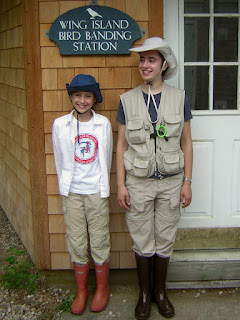 Kristen was also a big help keeping things organized at our banding table and releasing all the birds for me while Lauren and Sheryl were out at the nets. Here she is with a young male Baltimore Oriole. 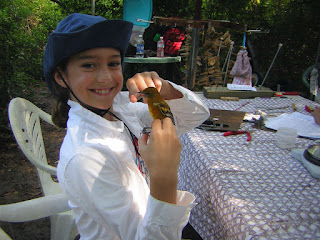 Ruby-throated Hummingbirds are on the move and we captured this HY female on the 25th. They often sit in our hands before flying off. 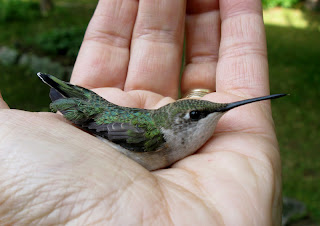