The second half of June was quiet for a time but with the onslaught of baby birds our numbers tripled by the beginning of July. It is then a mad rush to get babies banded and back to the spot where they were captured to reunite with their parents. They were emerging at my home too and I just had to share these adorable photos of a recently fledged Carolina Wren. It sat on the steps not quite knowing what to make of me and my camera. Notice the downy feathers on top of the head. So cute! 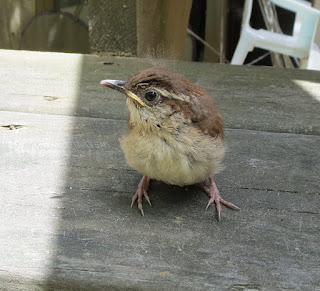 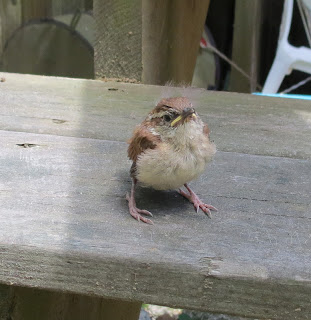 Back on the island we had numerous HY (hatch year or first year) birds on June 16- robins, chickadees, Carolina Wrens, and our first Hairy Woodpecker and Tufted Titmouse (shown below). 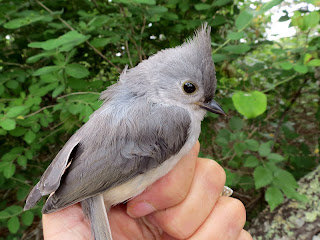 Notice the lime green ring around this young bird's eye which will darken to gray as the bird ages. 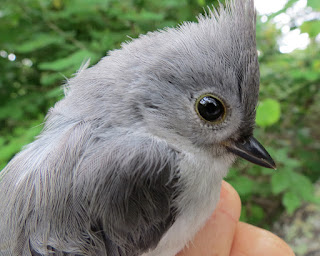 Most of our Northern Cardinals are aged AHY or after hatch year in the spring, which means banders know the bird is not a young bird but we can't age it past the previous year. Our female cardinal had retained two juvenal secondary feathers allowing us to age her as SY (second year) meaning she was born last year. Many cardinals will go through a complete molt in their first year but occasionally we get lucky and find molt limits in the wing as below. The two secondary feathers are shorter and browner than the feathers on either side of them. 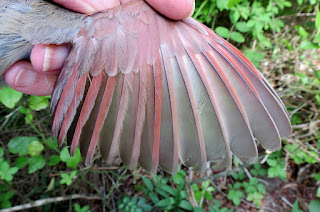 Flocks of starlings were visible flying over the fields and salt marsh on June 24th. I always cringe when they get close to a net and say a silent prayer that I won't find it full of starlings! We captured only 3 thank goodness, all HY birds. Young birds have grayish-brown plumage and we can sometimes sex them by the color of the eye; dark brownish gray for males and grayish with a yellow tinge for females, but I didn't feel comfortable assigning sex to this bird so I sexed it unknown. The eye color seemed to fall somewhere in between. 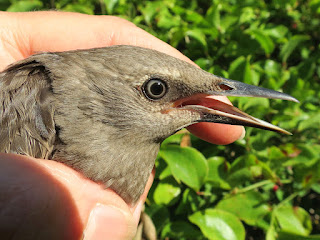 This bird had a severe case of cloacal flukes, a parasitic flatworm that causes this appearance around the cloaca (or vent- the opening for reproductive and excretory systems of a bird), so I'm not sure this bird will survive. 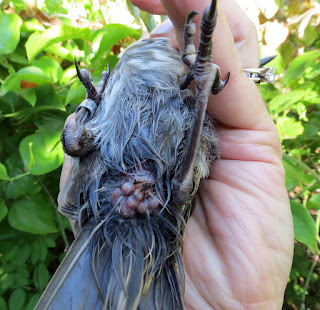 We captured a chickadee who still had the bright yellow gape of a very young bird. Babies have bright yellow mouths to make it easier for the parents to feed them. 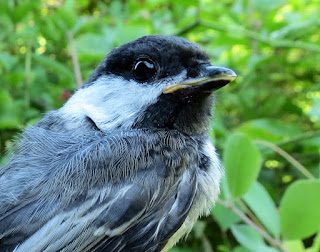 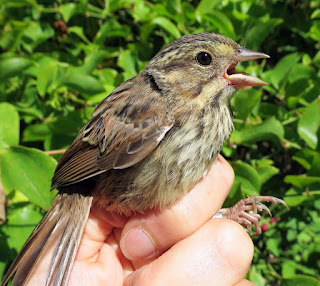 and a House Finch of unknown sex. 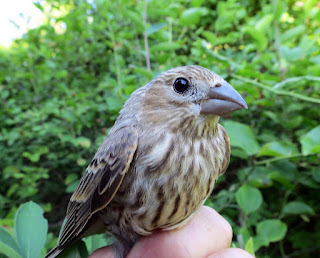 Most of our adult Yellow Warblers have finished breeding and are going through complete molts before heading off to their wintering grounds. 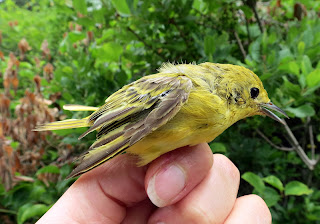 This SY femalewe captured on the 29th was molting her inner primary feathers, corresponding primary coverts, and secondary or greater coverts. 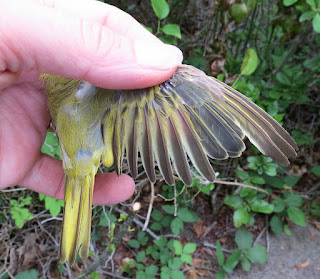 Also molting was this HY Hairy Woodpecker replacing only his primary feathers. 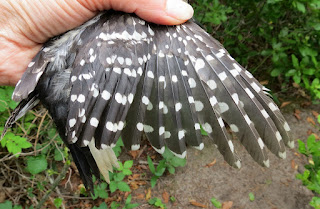 Young birds have grayish brown eyes and in males the red on the head extends in front of the eyes. 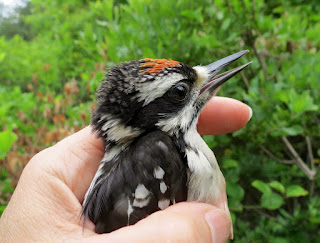 For some reason we don't capture many White-breasted Nuthatches even though we hear them almost every day we are banding. We caught this male also on June 29th. 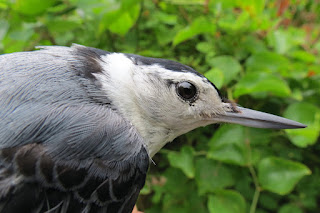 Pyle states that males can develop partial brood patches which indeed was present on this bird. 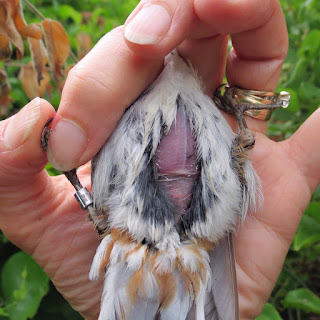 On July 7th we caught the female who had finished breeding and her belly feathers were growing back in. The head and nape feathers on females are a dull black or grayish color compared with the jet black on the male above. 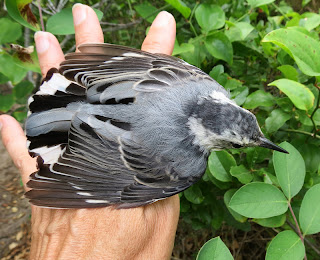 Most of the young Yellow Warblers we capture at this time of year can't be sexed but occasionally we can assign sex to the bird if we see red streaks on the breast such as this young male. 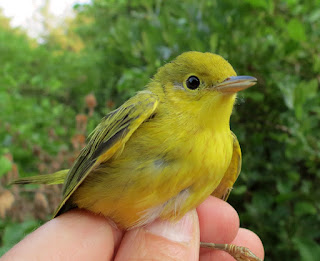 Ovenbirds have begun their southerly migration already, we've had three so far this month. 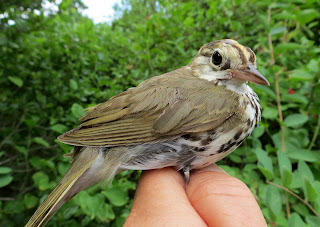 Our first HY Baltimore Orioles were captured on July 11th. We sexed her as a female due to her short wing. 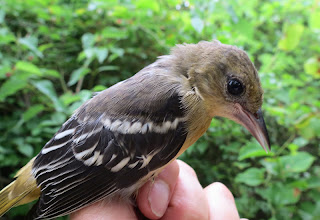 On the 14th we captured a very young Common Yellowthroat  whom we aged as  L for local, meaning the bird is unable to sustain flight. 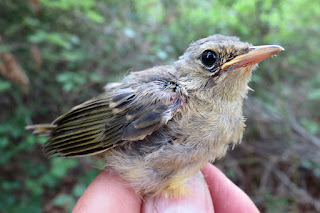 We also captured this young chickadee that had gone through some kind of nutritional difficulty as the feathers were just emerging. The bird has a striped appearance to the feathers 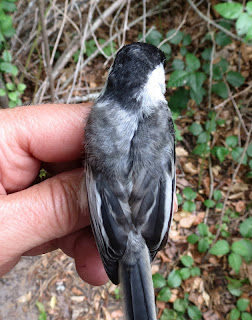 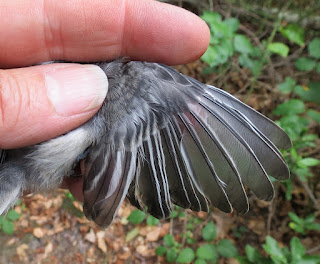 and if you notice the tips of the tail feathers also have uneven growth bars. 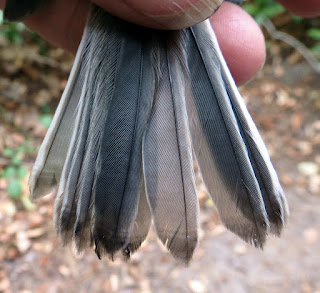 The Bird Banding Lab contacted me recently about three of our birds found by others. One was a Carolina Wren banded by Gretchen as a HY bird on 2 July 2010. The bird was found in a house on Smith Lane in Eastham, a town nearby, on April 6th.

On the 21st of June a Myrtle Warbler, similar to the bird pictured below, was found in Bridgewater, Nova Scotia. 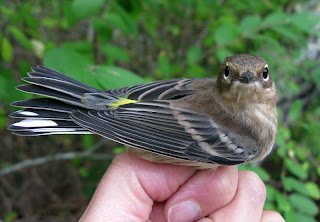 Sadly, the bird was found dead but still it is exciting when we hear about our birds being found in different areas. The distance between the two sites is approximately 337 miles as the crow flies, or I should say as the warbler flies!! 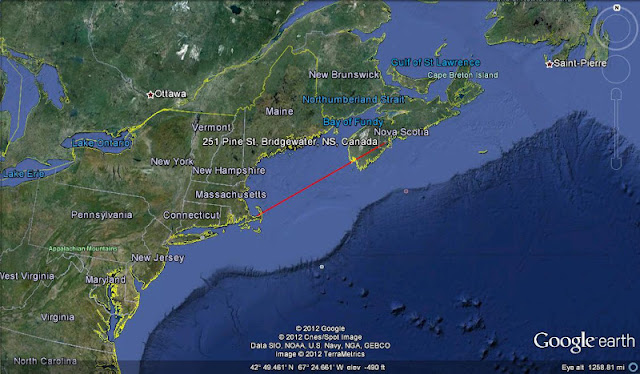 Lastly , a Common Yellowthroat I banded on 13 August 2011 as a young bird was recaptured and released unharmed at Manomet's banding station this past May 24th.

Speaking of recaptures we had a couple of significant encounters of birds previously banded by us during this time frame- a 6 yr old American Goldfinch and a 9 year old Prairie Warbler. This picture of the Prairie was taken in 2010 during his yearly molt. We've captured him every year except 2005. 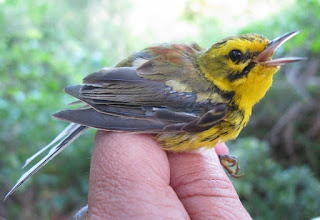 As always many thanks to those who put in many volunteer hours helping at the banding station including Ben Lagasse, Judith Bruce, Carolyn Kennedy, Gretchen Putonen, Jessica Rempel, and Judy Keller. The following is a list of birds seen, heard, or banded during this time period.