The End of Spring Migration

We banded another two days in May  and four days in June to complete the spring season. I was away for a spell in early June so didn't get out as often as I'd hoped, plus weather wasn't cooperating. We banded our FOY (first of year) adult male Cedar Waxwing on the 28th 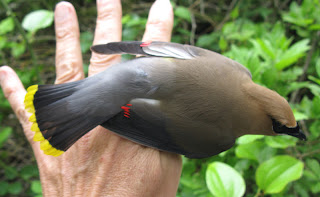 and Alice, a very enthusiastic high school student, was eager to release this gorgeous bird. 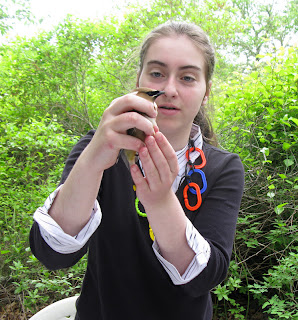 We captured two Saltmarsh Sparrows on 1 Jun, both in the same net. One was an obvious male due to a very enlarged cloacal protuberance but the other one was either a non breeding male he was chasing away or a female he was attracted to! The definite male was a bit brighter than the other one. 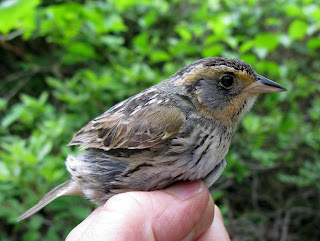 I was unable to age this bird past AHY (after hatching year). I could see a molt limit in the secondaries, it appeared he had replaced s6, however according to Pyle they can molt s6 again during the prealternate molt in the spring. I'm leaning toward ASY in this bird as the primary coverts seemed broad with a distinct edging. 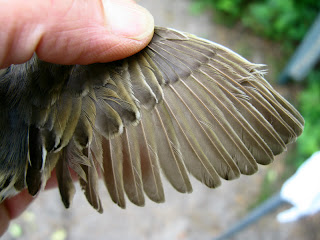 Our first Great Crested Flycatcher for 2012 was banded on 7 June, a female based on an extensive brood patch and a short wing chord. Females will drop their breast and belly feathers to impart warmth to their eggs as they incubate. In some species males will develop brood patches (BP's) too and this is the case with Great Cresteds , although the BP isn't as extensive in males. 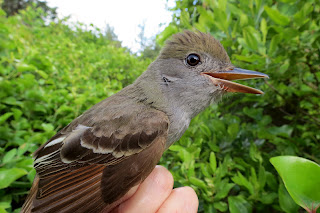 Our first baby birds (HY or hatch year) were captured on the 16th- a robin, 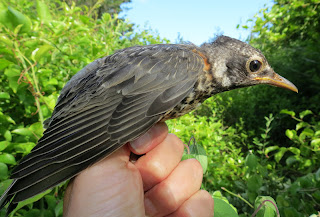 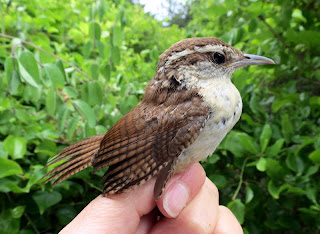 and a male Downy Woodpecker. The red on the top of the head are juvenal feathers that will be replaced during the 1st prebasic molt when the red feathers will show up on the back of the head. This bird was already beginning his molt replacing his first three primary feathers. 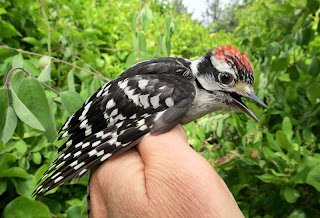 June 16th was our last day of spring migration monitoring. Overall, this was our worst spring season when comparing effort to previous years. We missed a number of species  we usually catch each spring- Common Grackle, Ruby-crowned Kinglet, no flycatchers at all including Eastern Phoebe and Eastern Kingbird, or numerous warblers- Northern Parula (although I heard it), Black-throated Blue, Blackpoll, Ovenbird (also heard), and American Redstart.  We had very low numbers of new birds for some of our resident birds- Blue Jay (1), Black-capped Chickadee(4), and Song Sparrow(7). We banded a measly 264 new birds. While Wing Island is great in the fall, I'm really considering looking for a new place for spring migrants, maybe back to the Punkhorn, although I'm sure some of my volunteers wouldn't be too eager for that (very buggy and rough terrain). We recaptured more birds previously banded than new birds- 267. Of those, 121 were birds returning from previous years. Our oldest bird was a 10 year old female Common Yellowthroat first captured in 2002. She then eluded us for 7 years recapturing her again in 2009, then 2010, and again this year. We also had a 9 year old Gray Catbird, an 8 year old Common Yellowthroat, four 7 year olds (Gray Catbird, American Goldfinch and 2 Song Sparrows), one 6 year old Black-capped Chickadee, and the rest were five years of age or younger.
The highlights of the season were capturing our very first Wood Thrush 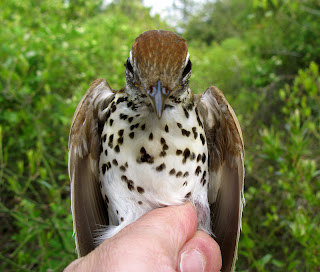 and adding a few new species for our spring list; Veery, Brown Creeper (pictured below) 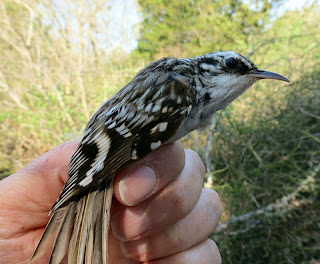 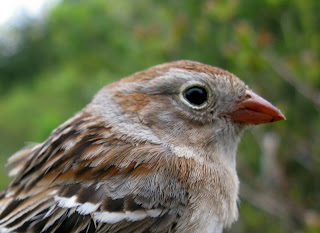 Many thanks to all who helped out this spring: Jo-Anna Ghadban, Gretchen Putonen, Alice Wynn, Jessica Rempel, Ben Lagasse, Carolyn Kennedy, and Judy Keller.