It has been a great week species-wise at the banding station. But all I can say is "Where are the MYWA's?" (the sub-species of Yellow-rumped Warblers we band called Myrtle Warblers). We've had a smattering of yellow-rumps but as this is our 11th fall season we've always had huge numbers of MYWA's coming in this week. Typically by now we are banding 150-300/week but 9? What? Rumor has it they didn't do that well on their breeding grounds, so I'm curious if any banders can verify that. On the other hand, as I said last week, Blackpolls did have a good year and we can attest to that with another 29 banded this week.

This past weekend a large covey of Northern Bobwhite were released on the island to try to establish a population of quail. This has been done for the past three years but most have not survived. On Monday as Gracie (our banding dog) and I walked through the field out to our nets on the bluff we ran into the covey and explosion of quail ensued! We've encountered them all week and some have ended up in our nets such as this HY female. Females have buffy coloration on their throats and males have white throats. 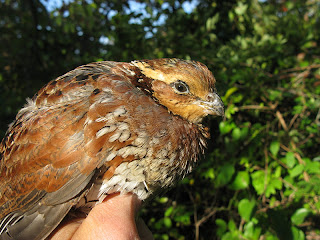 We ended up handling 22 species of birds on the 3rd including another American Redstart, 2 more Blue-headed Vireos, pictured below and always a pleasure to handle, although they can be a bit nippy, 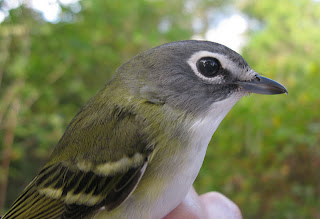 12 more Blackpolls,including an adult male with heavier and thicker black streaking on the body than it's HY counterpart 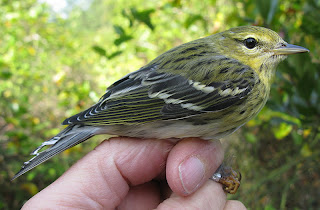 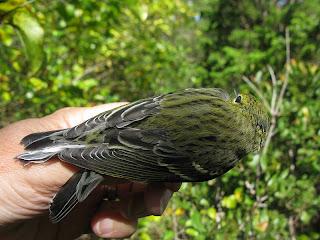 and our first Black-throated Green Warbler of the season. 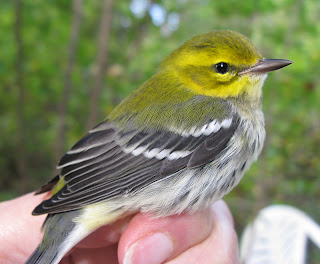 We banded four more on the 7th. Our 2nd Northern Parula was banded on the 3rd,  a HY male this time. 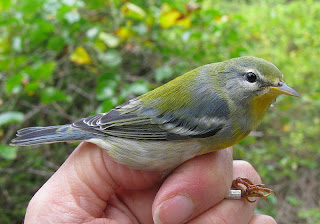 Males have a distinct tawny and slate-colored band across their breast not seen in females, although adult females can have a tawny wash. 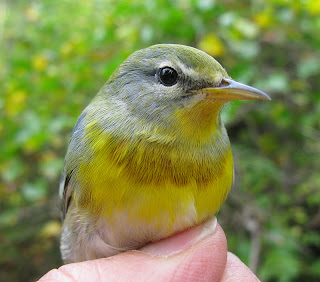 Our best bird of the day was a HY male Connecticut Warbler as we only band one or two a year. 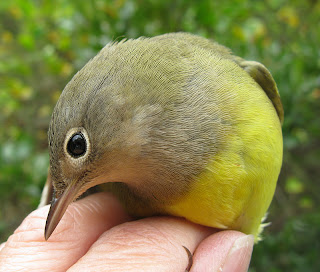 Rainy days prevailed both Tuesday and Wednesday so we were unable to band. We did get back out in the field on the 6th although it was a cool and windy day. Surprisingly we handled 105 birds with many of our northern birds showing up this day- Slate-colored Juncos, White-throated Sparrows, Golden-crowned Kinglets (18 in all), a hatch year female shown below, 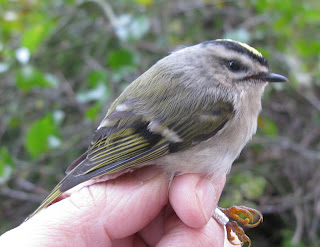 20 Ruby-crowned Kinglets with a HY male shown below, 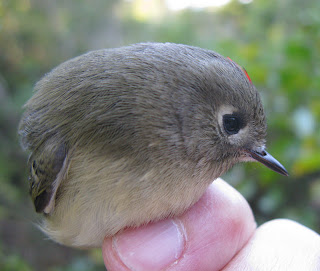 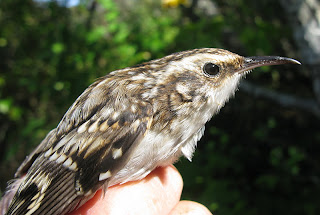 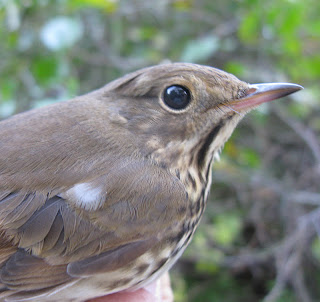 and a Winter Wren, 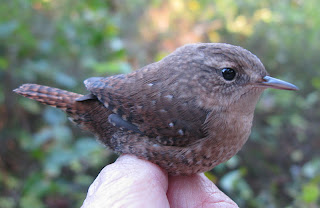 a species we haven't handled since 2008. They are such small and adorable birds with their tiny tails. 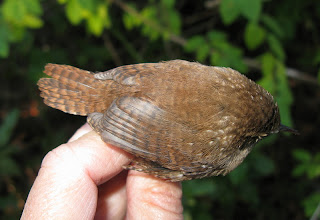 We also banded a few Myrtle Warblers and a Nashville Warbler. On Friday the 7th we added an adult Red-winged Blackbird to our list 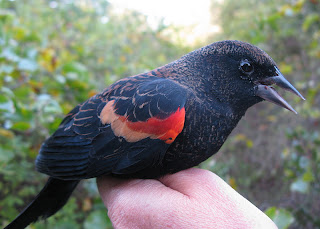 and a HY Eastern White-crowned Sparrow. 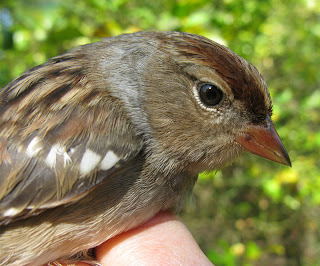 The next day we banded an adult Eastern White-crowned Sparrow, 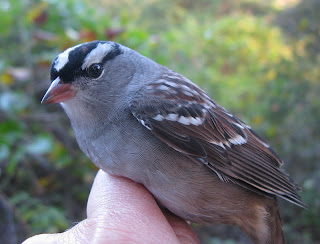 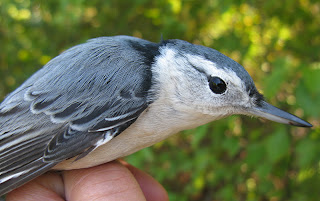 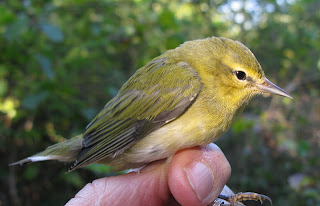 and an Orange-crowned Warbler with it's indistinctly streaked breast, 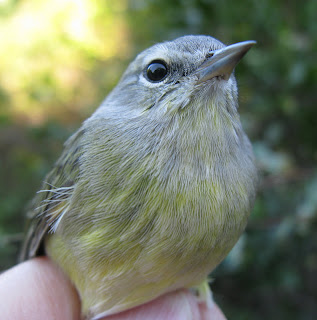 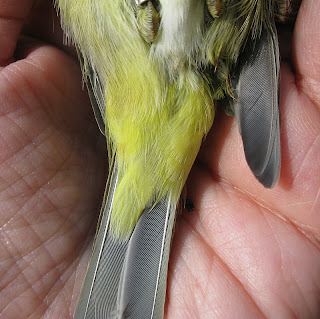 and concealed orange crown patch present on this young male. 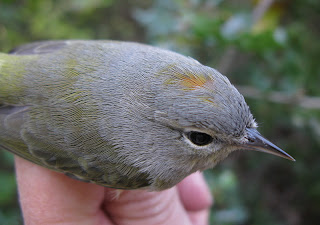 We had a Song Sparrow with an unusual  extension of feathers on it's tail shown below growing off the end of a feather the bird was replacing. It was a hatch year with fault bars evident across some of the feathers. 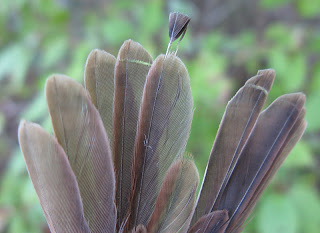 As always, a big thank-you to those helping this week- Jo-Anna Ghadban, Gretchen Putonen, Juliet Lamb, Carolyn Kennedy, Becca Miller, and Judith Bruce.
The following is a list of birds seen, heard, or captured (with numbers) this week.

We have enjoyed a fair number of Yellow-rumped Warblers in south-east Minnesota this October.

Good to know, maybe our bayberry bushes are having a bad year!

Some nice movement of yellow rumps the last week or so out in western mass. Love the shots of the CT and OC warblers.