It was at least 8 years ago when Bill Elrick, a fellow bander, got me thinking about banding Wilson Storm-Petrels. (Photos below by Peter Trull and Sue Finnegan). 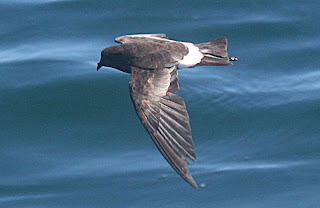 Bill enjoyed banding European Storm-Petrels in Scotland on their breeding grounds and suggested I try to band Wilson's on their summering grounds (from now on I'll use their species code WISP). WISP's breed in the southern hemisphere in cavities they excavate. Bill and others captured European Storm-Petrels in mist nets using vocalizations in the night and felt it would work for WISP's too.One idea was to set up nets on the beach during the night and call them in with tapes.  He thought it might be best in a rocky area which we don't have on Cape Cod.

A year later, Bill forwarded an email to me from the Frontiers of Field Identification, a listserv with a discussion on molt of WISP's and the lack of knowledge in how first year birds molt. Bingo! We had a reason to go for them. But how?

I got talking with Peter Trull, a teacher, naturalist, and author of numerous books. Peter had experience banding Common and Roseate Terns with Ian Nisbet in the past. Peter felt they could easily be caught by using chum off a boat and a long handled net. It took many years of occasionally talking about it but we finally got our act together, wrote a grant and received one from the Nutthall Ornithological Club, and set out this year to get the job done.

We hired a local hook fisherman out of Chatham, Teddy Ligenza, who agreed to take us out on his fishing boat, the Riena Marie. We would do our research while he fished. 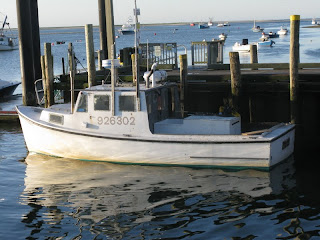 We had enough money to go out twice. Our first successful attempt was 7 July, but we had to abort the second try a week later due to very dangerous conditions from a sandbar that had developed overnight. Most of the fishermen knew not to cross it, but a large boat belonging to the Chatham Bars Inn had a group of tourists and they tried it anyway. Unfortunately for them the windshield got blown out as they attempted to cross the bar and had to turn around. Never under estimate the power of the sea!  We had another successful day on 22 July but fog was dense again with 3-5 ft seas. It was a challenge collecting measurements and taking pictures of the birds as I was tossed around.
The night before our first day on 7 July I tossed and turned  anticipating this new adventure. I couldn't wait to get out there and see if we would be successful. It was still dark when I left my house at 4:15 am to meet Peter and Teddy at the Chatham Fish Pier. The sun was just starting to rise when we left the dock with fog as thick as pea soup.

It didn't take long to get a few miles off of Chatham where Teddy fishes. He prepared his hooks with bait 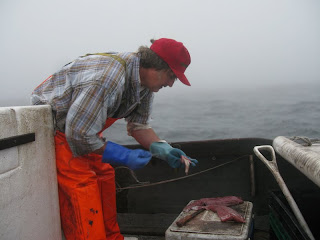 and dogfish were biting as soon as he threw out his lines. 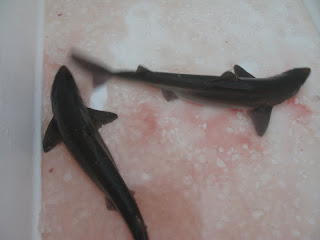 They are called dogfish for the barking sounds they make. It took Peter and I awhile to get in the swing of things but soon we had a momentum going. Thankfully Peter (and not me!) retrieved the livers from the fish, which we used as chum to attract the birds. 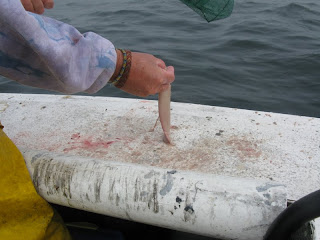 Chum was spread out on the water. 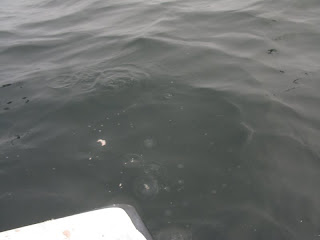 WISP's showed up in minutes, along with Great, Sooty, Manx, and Cory's Shearwaters. Petrels have a dainty way of lightly stepping on the water as they search for food. 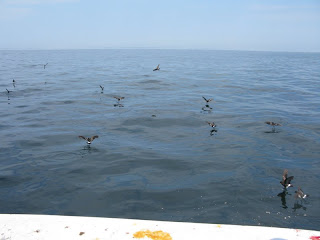 Our next task was capturing the petrels. Not being very good in sports I was also bad at trying to catch the birds. Luckily Peter was on a roll so that became his job too.
Got it! 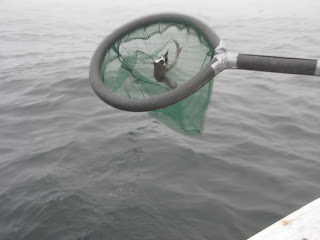 As soon as he caught one in the padded long-handled net he removed the bird and handed it over to me. 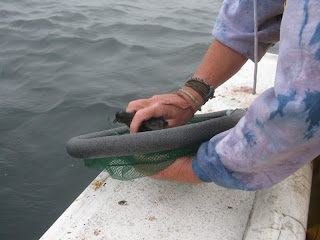 We rigged up a line and hung the birds in bird bags while they waited to be processed. After capturing between 5-10 birds we would process those and release them before capturing anymore. We had to go through the chumming process all over again. 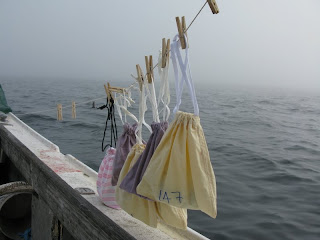 It was my job to process the birds. First I banded them with stainless steel bands. You can see what a messy job fishing is! Luckily I was able to ignore the blood and fluid surrounding me. 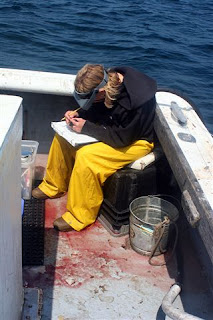 I assessed them for molt 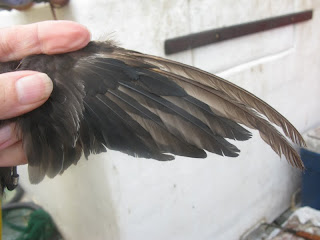 and took photographs of their wings, tail, and claws. 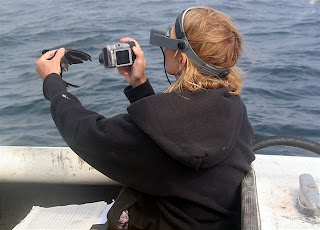 WISP's have good size claws they use to dig their burrows. The webbing between their toes is yellow and veined. 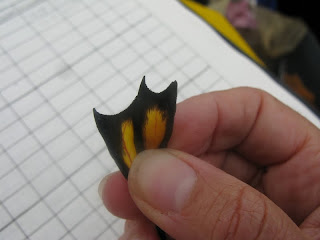 After processing Peter clipped a tiny bit of feather from one of the feathers they were about to molt so we could have stable isotope analysis done. We hope to discover where the feather was grown, either in the northern or southern hemisphere. If grown in the southern hemisphere, it would tell us the bird was a juvenile as adults would grow their feathers in the northern hemisphere. After that the bird was released.
Wilson's Storm-Petrels belong to the family of tubenoses, visible above their beak. They drink salt water and the salt is excreted through the tubenose. 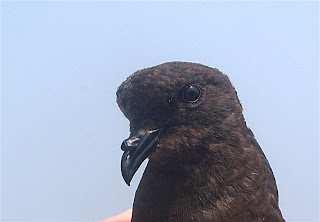 While netting for petrels, we also encountered a Great Shearwater 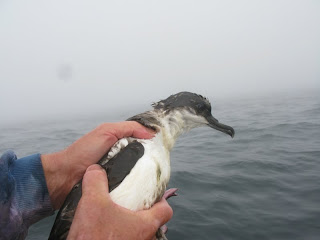 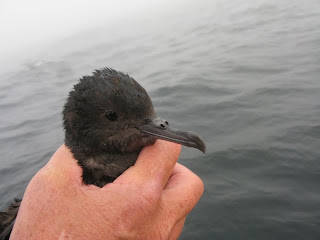 and Peter even caught a Cory's but it escaped. We also saw numerous whales, both Minke and Humpbacks. 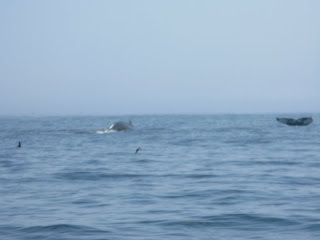 Over the two days, we captured a total of 50 WISP's, all in molt, and felt good about succeeding with that many birds when we weren't really positive if we would catch any! 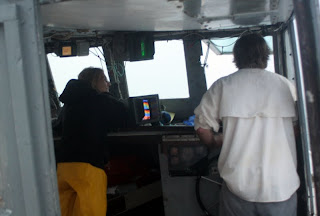 while PT rested after his grueling bout catching petrels. 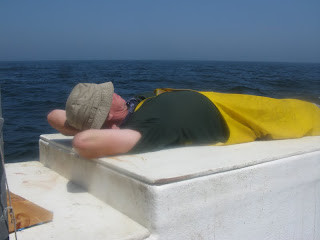 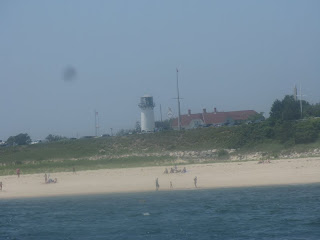 and many stately homes. 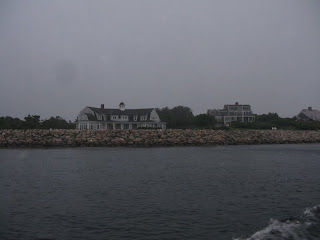 I thought about how I may not have all the money in the world but how lucky I am to be able to be out in the wild, be it field, woods, or sea learning what I can about our avian world.
The icing on the cake was being surrounded by gray seals as we tied up to the dock. A great two days! 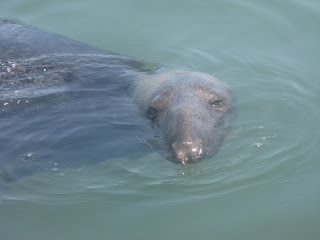 Peter was happy too! 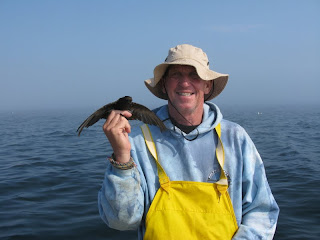 Now if only I could get that dogfish smell out of my clothes.....
Posted by Cape Cod Bander at 4:17 PM