This week was a last ditch effort to hopefully add a few more migrants for our spring list, but the nets were fairly quiet. Blue-headed Vireos were heard singing near the banding table both on Wednesday and Sunday but none were captured. Wednesday I heard a Black-billed Cuckoo singing from across the marsh. He didn't get captured but we did manage to band an American Redstart, a second year male. 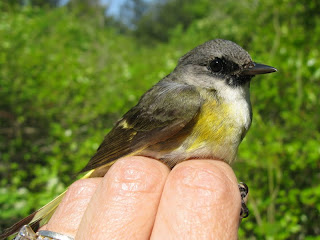 Male redstarts won't resemble the adult until they go through a molt in their second year after breeding. Some black feathers are usually visible by spring and this male has black feathers in the face, throat, and breast. 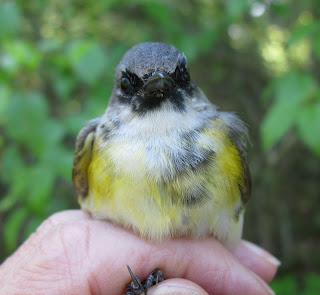 Redstarts get their name from the reddish orange tail feathers seen on the adult male. Apparently 'start' is an old name for tail. They are often seen flashing their tails as they flit about capturing insects and often do during the banding process too. 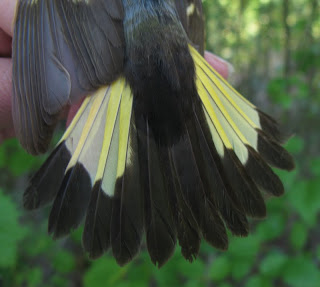 They have whiskers called rictal bristles on either side of the bill similar to flycathers, supposedly an aid in capturing insects. You can see them on the left side of his bill. 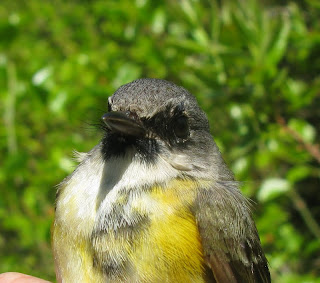 Another nice bird on Wednesday was a second year male Magnolia Warbler. 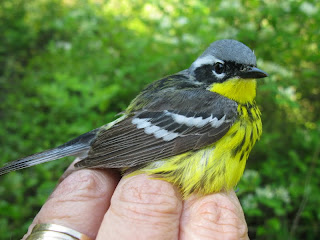 Magnolia Warblers go through a prealternate molt during the winter as they get ready for the breeding season, replacing some body and wing feathers. Older adult birds will display 2 generations of feathers in the wing, those that were replaced during their annual molt and those replaced during the prealternate molt. Second year birds will show 3 generations of feathers as was the case with this male. He replaced his inner greater coverts (the shorter feathers with white tips second row down) during the prealternate molt, the remaining outer greater coverts were replaced last fall, and the primary coverts (the smaller browner feathers towards the distal end of the wing) are retained juvenal feathers. 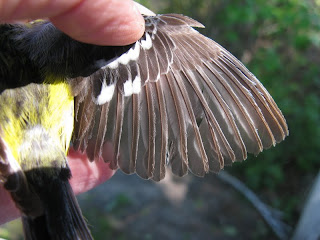 Another Ovenbird showed up too. If you look closely in the lower left corner I unknowingly got part of a beautiful spiderweb in the picture! I'm always amazed at the size of their eyes compared to the head. They prefer to live in large tracts of forest so large eyes would be an advantage in the low light of the woods. 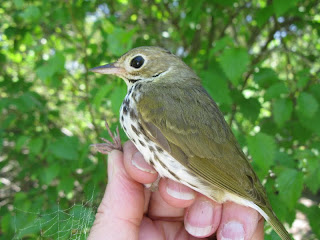 We captured a female Blue Jay with a brood patch. She was first in line to be banded to get her back quickly to her nest.  She posed nicely enabling me to get a quick picture of her. Her blue coloration is not due to blue feathers but something called Tyndall scattering. When light strikes air filled cavities in the feather barbs it produces the blue color we see. 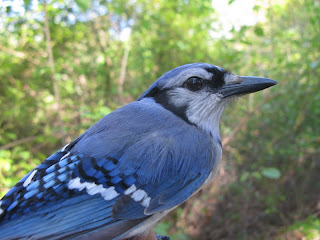 I was able to age her as a second year bird due to the molt limit in her wing. You can see the replaced longer, brighter blue and wider black bars to the inner greater covs compared to the retained outer 3 greater coverts. Also the retained juvenal primary coverts have no barring. 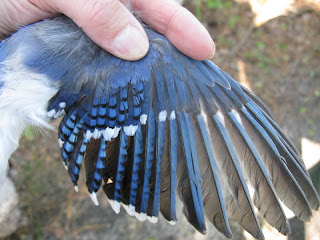 I was able to get out again on Thursday the 26th. Boy did it feel nice to have two sunny days in a row! Felt good for the soul and I think the birds appreciated it too as there was an abundance of bird song. I watched a brilliantly colored male Indigo Bunting in the field at the same time crows were incessantly mobbing a Red-tailed Hawk. The hawk was working the field from north to south perching in a tree near the bay and then would fly to the next tree in a southerly direction. Even the mockingbirds got in on the act of attacking him, but once he moved out of their territory they settled down. I'm a bit surprised they haven't attacked me yet as I'm sure I pass their nest on the way to some of our nets. Mid morning I captured a pair of Eastern Kingbirds, but otherwise no birds of great interest, just the usual suspects. It was great to be able to compare the male and the female kingbird. The plumage is the same for the two sexes, however I did notice an interesting difference in the color of the inconspicuous orange crown feathers. Directly below is the male 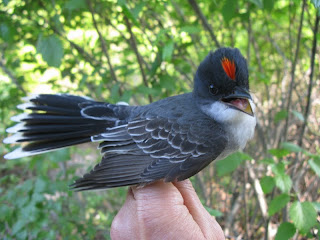 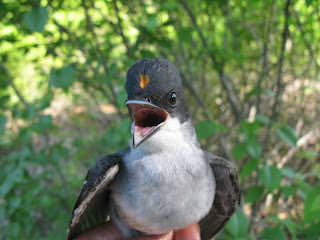 The female's wing length was quite short, totally out of  range for a male, plus she had a brood patch. The notch on the outer primary feather (p10) is shorter than the male also. You can see a slight difference in length between the two sexes. First the longer notched p10 of the male 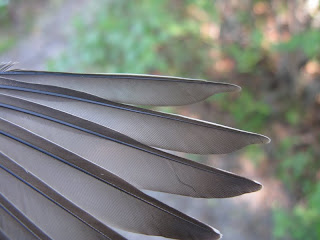 and shorter notch in the female. 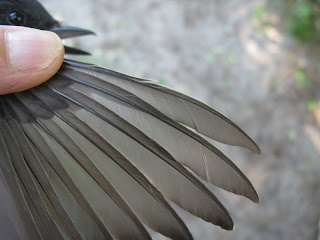 The highlight of the day on Sunday was an Eastern Wood Peewee. This was only the 4th peewee we've captured at the station since opening in 2000 and our first spring record. The birds we captured in 2001, 2006, and 2009 were fall birds. At first glance you might think this bird is an Eastern Phoebe, but the lower mandible is a dead giveaway. The lower mandible in the phoebe is black but is orange in the peewee. 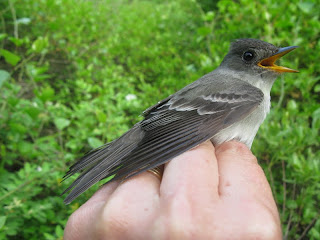 Separation from Empidonax flycatchers is easy as the peewee has a much longer wing. The tarsi (leg bones above the feet) are also very short. 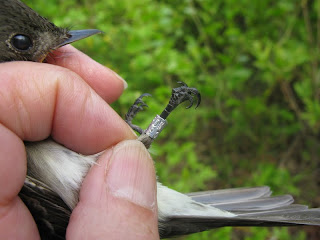 As Carolyn was checking nest boxes on the island on Sunday, a female Tree Swallow flew out of the box at the same time one of the white feathers that Tree Swallows use to 'claim' their box fell out. She immediately scooped it up in her bill, looked at Carolyn indignantly and put it right back in the box!
We did get out again on Memorial Day but the activity was so limited we closed nets early and called it a day. We captured only 109 total birds during the four days of banding this week. Of those, 24 birds were returns from previous years and three were at least 7 years old; a cardinal, goldfinch, and Common Yellowthroat, all females. Thanks very much to Gretchen Putonen, Carolyn Kennedy, Judy Keller, Suzanne Faith, and Diane Silverstein for their help this week. Birds seen, heard, or captured between 25-29 May are shown below.
Total Birds: 109                                  Total Species: 50
Total Banded Species: 17                    Birds/100 net-hours: 26

I caught a great photo of a banded Red-tailed Hawk. I don't know how crazy I would be about doing that!