I was only able to get in five days of banding in the past two weeks due to high winds and/or rain. It has been a really tough spring this season compared to the glorious days of last year at this time. Unfortunately, this weather is a bit more typical for spring on Cape Cod. I attempted to band on May 9th but closed up after two rounds due to the high winds capturing only a Common Yellowthroat and 3 catbirds. May 13th was a bit better with winds 5-10 mph but they were from the northeast so I didn't expect to capture too many migrants. I was happy to get a Saltmarsh Sparrow in full breeding condition however, he probably was forced up to higher ground from the saltmarsh during the high tide. 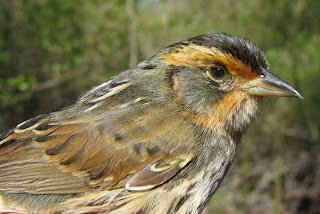 Some nice migrants came in on the 14th even with a cold and misty start including a SY Black-throated Blue Warbler. 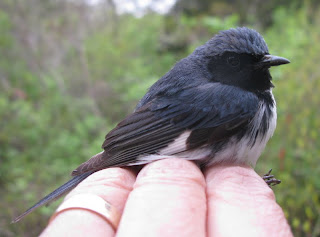 He had a molt limit in his wing molting all of his greaters coverts including the greater alula, but not the other two. 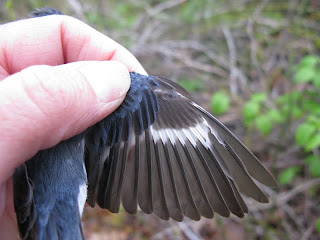 I continued hearing Black-throated Blues throughout the next week but he was the only one we captured. Black-throated Green Warblers were also heard singing but they completely eluded us. Our second Nashville Warbler showed up this day, a SY male this time. 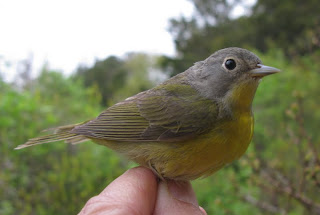 We were happy to capture a White-eyed Vireo 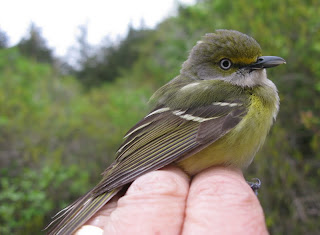 ageing this bird as a SY due to a molt limit in the primary feathers. White-eyed Vireos can do an incomplete molt eccentrically during their first year, which means they can replace some outer primary feathers and inner secondary feathers leaving a block of retained flight feathers in the middle. This bird replaced his outer 5 primaries, you may be able to see the darker shafts on those feathers. 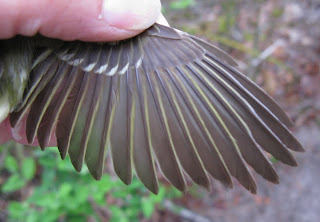 I was finally able to get a picture of a more cooperative Carolina Wren of unknown sex, who wasn't as squirmy as the others. They can have a molt similar to the vireo above, although it was harder to tell on this particular bird, who may have just molted the greater coverts since the flight feathers appear to line up fairly well. The primary coverts were extremely abraded so we aged it as a second year. 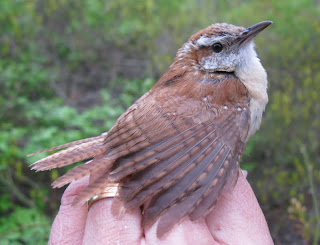 A SY Common Yellowthroat who was first banded as a hatch year bird on 2 Aug 2010 and found with avian pox on his lower mandible showed up this day with it completely healed so his immune system was able to get rid of the virus. 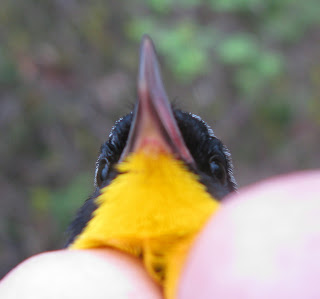 I wasn't able to get out again until the 20th as rain occured every day from May 15th- May 19th. The only new species for the spring season this day was a beautiful ASY male Red-winged Blackbird. 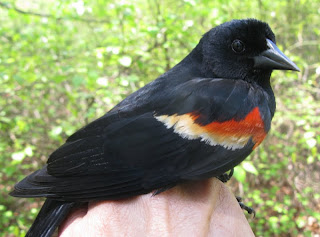 The south winds the evening before brought in a few more first spring migrants  for the season on the 21st. A male Blackpoll Warbler, not too cooperative, but I was able to get a quick pic showing off his gorgeous plumage. 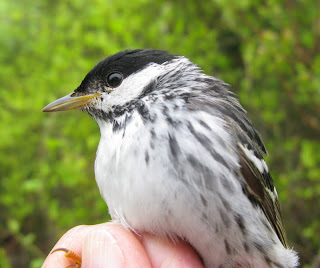 We captured another Myrtle Warbler, a SY male, this was the latest spring date in the past 11 years of banding on the island for this species when most have gone through by the first week in May. 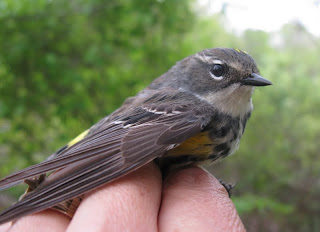 Eleven Prairie Warblers (5 new and 6 recaptures) were netted during this period including two on the 21st that had this 'gunk' under the bill which wasn't there when we first recaptured the bird below on the 3rd.  The other prairie was also first recaptured on the 3rd. Must be something they are eating. Juicy bug? 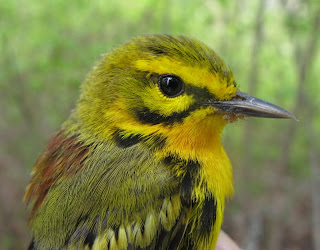 Although we aren't allowed to band game birds we were still thrilled to get a Northern Bobwhite, a female,  in our net. Females have buffy coloration to their chin, throat, and supercilium (the area above the eye). In males this area is white. Isn't she outstanding? 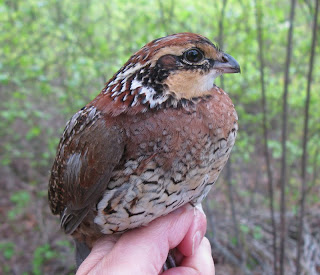 And take a look at the beautiful pattern on her back. I bet she is a bird that was released last fall by fifteen year old Nicholas Fiore on October 31st, for a licensed project to help the species populate this habitat. 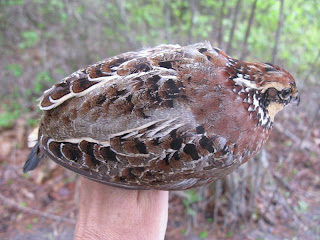 We recaptured a Pine Warbler, the one that was banded on May 3rd but sadly she presented with cloacal flukes, not seen on the 3rd. She had no brood patch and may have problems trying to mate. 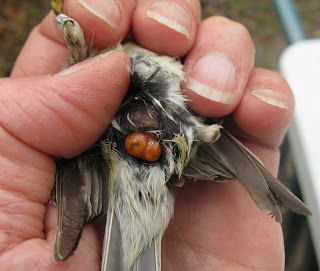 We captured a Red-eyed Vireo, a first spring capture for this species at our site, in past years we've only captured them in the fall. 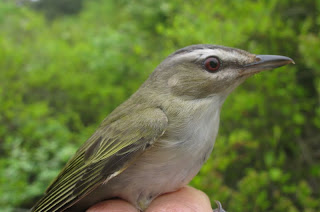 All in all, 158 species were netted during this time period. Eighty were new birds and 77 were recaptures. Of the recaptures, 31 were returns from previous years including a few oldies: a 6 yr old Song Sparrow, a 7 yr old American Goldfinch and Common Yellowthroat, and a 9 yr old Gray Catbird. Thanks very much to the following people who helped out at some point during these banding days: Cathy Connolly, Arlene Hedlino, Carolyn Kennedy, Gretchen Putonen, and Jessica Rempel. Birds seen, heard, or captured between 9-21 May are shown below.

The photos are gorgeous - and the list quite impressive. I should hang out with you for the photo ops!

Come for a visit sometime!