The End of a Season and Some Mysteries Solved

Our banding season officially ended this year on 15 November. The 3rd week in November was just too windy and cold to safely open nets, so we took nets down the following Saturday. It is always with mixed feelings when nets come down at the end of the year. I'm sad not to be out spending my days in the woods and fields with birds, but am also grateful for the reprieve of not getting up before dawn and walking  6 miles/day and the consequent exhaustion! By March I'll be itching to get back.

2010 was our best year ever. We actually had a real spring here on cape. Warm, dry days prevailed enabling birds to fledge more young I believe. The fall was windier than usual causing us to lose some banding days but even with that we handled more birds than ever before- 5,347.  This includes new bandings, recaptures, and those released unbanded. 3,475 birds were banded and 1,753 were recaptured. Most recaptures were from the current year, but 176 were birds returning from previous years with our oldest bird being a 9 year old Blue Jay.

We banded 89 species this year and 6 of those were new to the station. New this year were a Kentucky Warbler, who arrived in May, a handsome fellow! 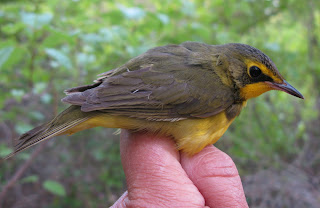 A Least Flycatcher in August, 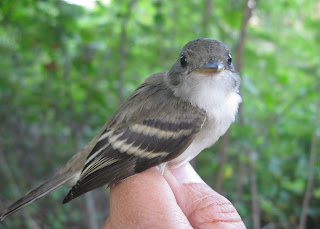 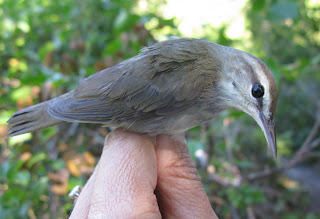 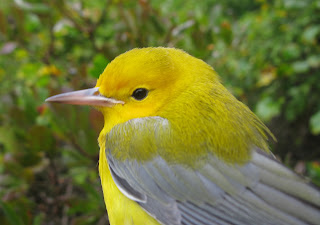 a Grasshopper Sparrow on the 19th of October, 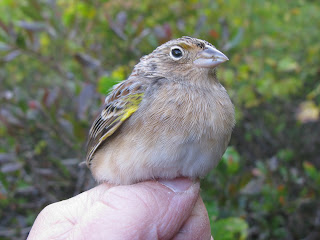 and finally that big bruiser, an American Crow in November, who was giving me a piece of his mind in this photo. 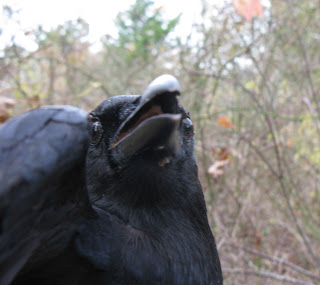 Throughout the year I posted some pictures of birds that I had questions about. There was the Gray Catbird with what I thought was fluid under its skin, but was actually air. See
http://capecodbander.blogspot.com/2010/06/migration-comes-to-halt.html
To quote Bob Mulvihill from Powdermill Avian Research Center in Pennsylvania, who is always so helpful and willing to share his vast knowledge, "Your catbird had what is called a pneumo-thorax. The expanded area is actually air-filled, not fluid-filled. This occurs when one or more air sacs ruptures, and the escaped air gets trapped under the skin."
He and others commented on the Downy Woodpecker I banded in late September. See
http://capecodbander.blogspot.com/2010/10/uncooperative-weather.html
It was felt this was an older woodpecker (ATY or After Third Year) due to the presence of three generations of non-juvenal primary coverts. The brown feathers would be much more worn if they were juvenal feathers.
Then there was the Traill's Flycatcher with the strange material stuck to its legs- 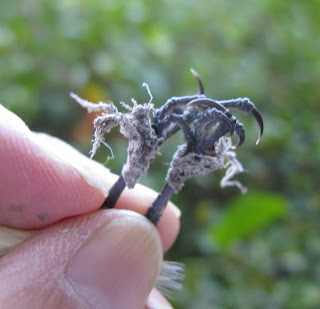 I was able to cut the material off and sent it to Karl Johnson. Sheryl and Lauren Johnson help me out in the summer at the banding station and Sheryl thought her husband, who is Professor and Chair of the Biology Department at Haverford College in Pennsylvania and a great microscopist, might be able to figure out what it was. He took the time to look at it under a powerful microscope. Here are his thoughts and some pictures:
"When I examined a sample under the microscope, I found that the material is a tangle of filaments with fragments of other materials. I have attached several images where I have teased things out on an edge (the view is a bit more powerful than you would see through a hand lens). The two lower power images compare transmitted light and darkfield illumination (darkfield really pulls out the fibrous nature of the material); the third is at higher magnification. The sample appears to be a mat of fibers, mostly thin (often twisted in yarn-like bundles) with a few thicker elements, incorporating other materials such as a few pollen grains. Given the fiber-like nature of the material, I compared it to a collapsed cobweb and found them remarkably similar - a few thicker elements of the drag line silk, but predominantly thinner fibers of capture silk. Interestingly, the sticky capture silk in my specimen had even trapped pollen grains in the mat, just as I noted in the material from your bird.
I suspect that your bird had tangled with a large spider web and that the resulting mat was a bit difficult for it (and you) to remove. Spiderweb silk is a remarkably strong, resilient and lasting material. A "catchy" story!" 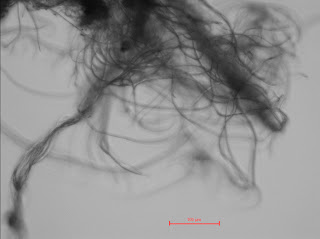 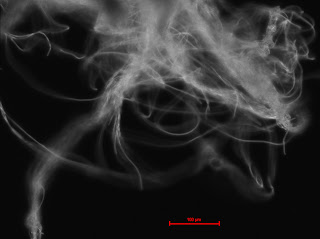 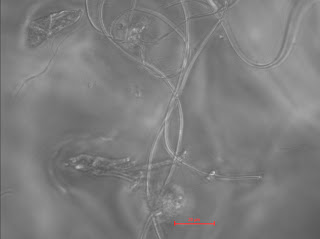 And lastly there was the Myrtle Warbler in October with the odd toe growths. 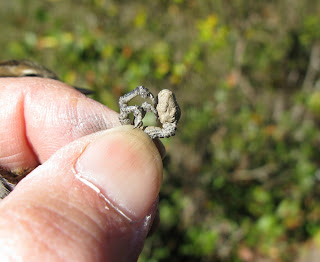 Bill Hilton of the Hilton Pond Center for Piedmont Natural History in South Carolina felt this was an example of old avian pox. According to Bill, "when it's fresh the tissue is soft and pink or yellow. It hardens over time and sometimes the affected toe falls off." Thanks for your help, Bill!
The banding program is volunteer run.  Over 1623 hours were donated this year. A big thank-you goes to all volunteers who helped out with this project: Bander Gretchen Putonen (269 hrs), Jessica Rempel (84 hrs), Bander Carolyn Kennedy (76.5 hrs), Jo-Anna Ghadban (72 hrs), Judith Bruce (34 hrs), Peter Brown (26.5 hrs), Judy Keller (23 hrs), Mary Bassing (20 hrs), Jan Bridge (11 hrs). Thanks also go to the following people who helped out at various times this season; Sheryl, Lauren and Kristen Johnson, Tom Burgess, Roger Mongold, Kate Iaquinto, Mo Correll, and Suzanne Moore. Many thanks go to Bill Otis for his work updating and maintaining the website.

Our financial support comes solely from donations and grants. We are eternally grateful to the French Foundation, which has supported us for many years enabling us to buy nets and other equipment we need.
Donations can be sent it to:


Wing Island Bird Banding Station
Cape Cod Museum of Natural History
869 Main Street
Brewster, MA 02631
508-896-3867
This will be my last post until next year. I may post if I do any winter banding teaching new volunteers how to extract birds from mist nets, but otherwise I'll be back in the spring!
Posted by Cape Cod Bander at 8:59 AM

Interesting, especially solving the mysteries of the spider web and toe growth!

There are a lot of fun things to do on Cape Cod. It is an exciting place where you can find amazing beaches, great lodging, good food and wonderful people!