August was quite a bit quieter bird wise compared to previous years. Where are all the Eastern Kingbirds? We banded 22 last summer but haven't had one in our nets this year. We have barely recorded hearing or seeing them too. Comparing the month of August, other bird numbers are down too, the most dramatic being Eastern Phoebe (29-2012 compared to 3-2013) and Gray Catbird (433-2012 compared to 95-2013) . Bird populations fluctuate from year to year, but there was such a change from last year.

We captured our first Saltmarsh Sparrow for 2013 on 3 August, a handsome male. 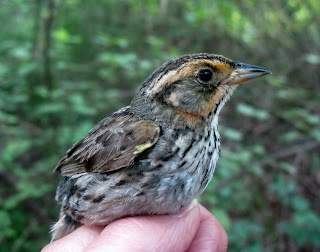 He was definitely breeding, there was no missing his very large CP (cloacal protuberance) on such a little bird. For those of you who are not banders, this area is normally flat but during breeding structures called deferent ducts fill with sperm and produce the protuberance seen below.  We are able to sex this species as male when we visualize the CP. 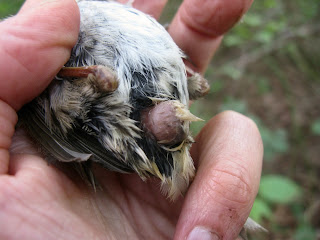 We captured a hatch year (HY) Saltmarsh Sparrow, maybe his offspring, on the 6th. 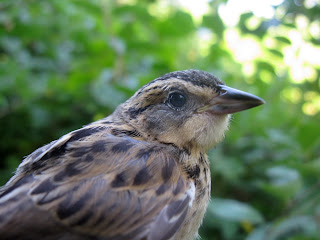 The Saltmarsh Sparrow used to be called Saltmarsh Sharp-tailed Sparrow. You can see why! This picture came from another bird on the 19th, a SY (second year) bird I believe. 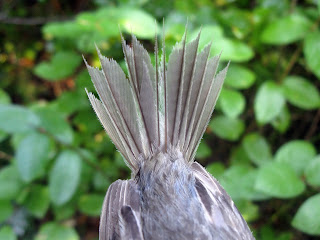 On 5 August we banded our 5th ever Eastern Wood Peewee, strange considering they breed in numerous areas nearby. They belong to the flycatcher family but differ from phoebes by their orange lower mandible and from Empidonax flycatchers by their very long wing. 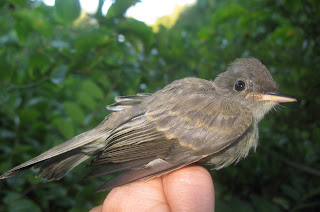 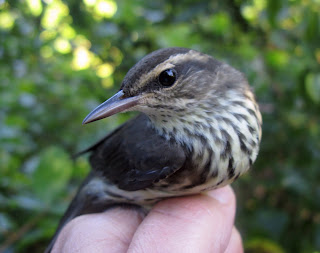 as well as a Red-breasted Nuthatch, which we haven't seen or heard on the island since June. 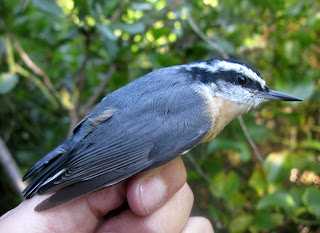 Northern Flickers (Yellow-shafted) are often hard to capture. They are large birds and easily bounce out of the net. This adult male was banded on 12 Aug. 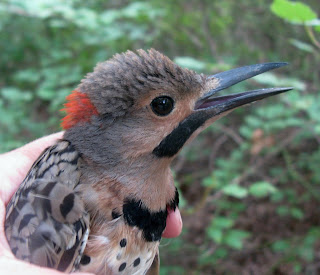 Two days later we captured a young male. His moustachial stripe and red head feathers aren't quite as bold. 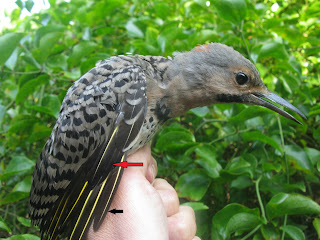 Before their first prebasic molt another key banders can use to age HY woodpeckers is the comparison of the outermost primary feather (p10-black arrow) to the primary coverts (red arrow). Notice how much longer p10 is compared to the primary coverts. Once this bird molts however p10 will be about the same length.
Here we have a teaching opportunity on the 17th probably discussing ageing of catbirds! 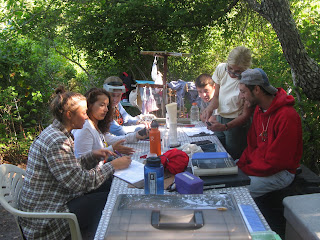 The House Wren banded on the 19th was still in full juvenal plumage. 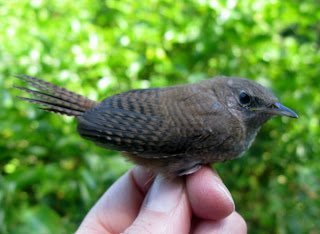 The barring on the wing lines up in a neat row indicating no feathers were molted. House Wrens can do an incomplete molt during their first prebasic molt meaning they can molt their outer primary feathers and inner secondaries. 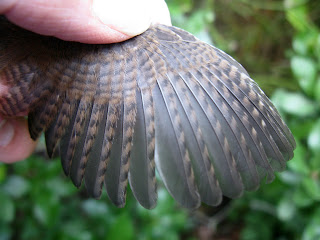 Our first HY Great Crested Flycatcher was also banded on the 19th. 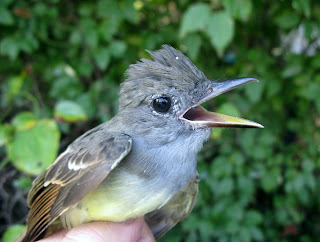 I'm sure this bird was quite successful in getting fed by a parent before fledging! 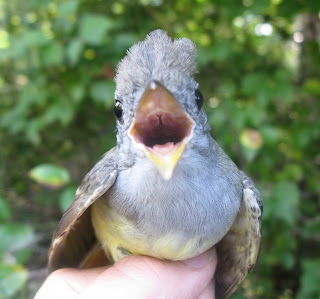 In juvenile Great Crested Flycatchers there is cinnamon edging to the wing feathers. 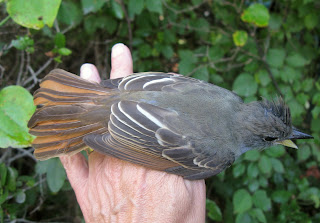 We held our first banding demonstration of the fall for a group taking the ornithology field school course at Wellfleet Bay Wildlife Sanctuary. They traveled to Wing Island to learn about the banding process. (photo by Ronald Kielb) 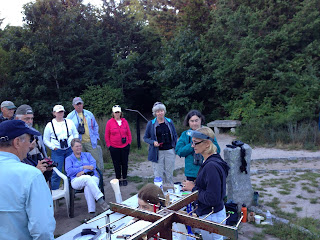 I've been so fortunate this year to be joined by multiple young adults from other organizations eager to learn about bird banding. Their enthusiasm has been infectious and it has been such a delight to pass on my knowledge to a younger generation of possible future banders. I wanted to get a picture before they left for college or other jobs. Pictured left to right- Ben Lagasse, a U Mass student who monitored the breeding success of Wood Thrush at the Big Oaks National Wildlife Refuge in south central Indiana for a study on population dynamics run by the Smithsonian Migratory Bird Center this summer. Ben also helped me all last year. Keenan Yakola, a U Mass student and a Coastal Waterbird Monitor for Wellfleet Bay Wildlife Sanctuary; Ronald Kielb, Terrapin Research Coordinator at Wellfleet Bay; Karli Rogers, a Biological Science Technician with the Cape Cod National Seashore; Dominique Biondi, Crew Leader  with Mass Audubon, working at South Beach researching Piping Plovers, American Oystercatchers and Least Terns; Carly Congdon and Yianni Laskaris, both Biological Science Technicians at Monomoy National Wildlife Refuge with the FWS monitoring Piping Plover, American Oystercatcher, and Least Terns. Not shown is Corey Accardo, Research Assistant with the Provincetown Center for Coastal Studies. 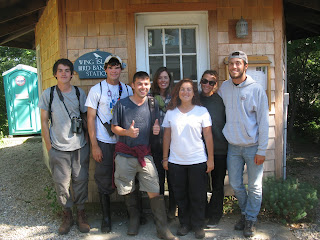 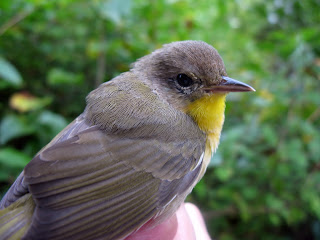 who had 2 leucistic feathers on the wing, the 2nd alula feather (A2) and the outermost primary covert. 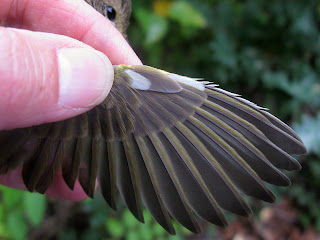 On the 28th, this Eastern Phoebe must have run into a spider web at some point, you can see it wrapped on the legs. We see this phenomenon occasionally. A few years ago I saw this on a Traill's Flycatcher, except it covered both legs and a Microscopist examined the material and said it was a mixture of spider webbing and plant debris. After publishing this blog, I heard from another bander, Thomas Erdman, Curator at the Richter Museum of Natural History in Wisconsin and this is what he had to say, "Hey, your Phoebe with "spider web" bands, or as we call them "Fairy Rings" is not from spider webbing! We have been documenting this for many years for the autumn migration.. I've given Fairy Rings to spider experts and to Mycologists, they all have said they are not from their domains.  Right now we think it is probably from tree caterpillars like Oak leaf rollers, Bagworms, Sawflies, Cankerworms, etc...  Will have to wait to see if an entomologist can key them out. We've seen Fairy Rings on many species of warblers, and kinglets often have a lot. I had at least two individuals that were severely handicapped by the rings which had also accumulated other debris such as spruce needles! Both were very underweight and probably would have perished had we not cut the "rings" off. The birds apparently can't remove the rings and in some cases the rings continue to add material."
So to you banders out there, it is probably a good idea to cut the material off so it doesn't build up. We cut it off the phoebe before releasing. 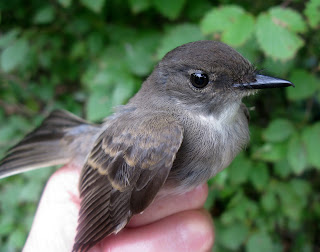 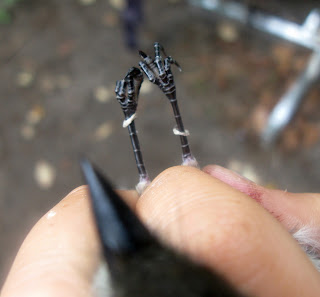 I've banded quite a few hummingbirds this summer compared to previous years, 46 for the month of August. Four of those birds were captured in our mist nets on Wing Island, but the other 42 were banded in my backyard. The busiest day was 9 August when I banded 5 in two hours. Fall migration along the coast isn't as great for hummingbirds as it is further inland so that was a big number for me! My pattern was to band at Wing Island in the morning and then capture hummingbirds in the afternoon near my deck as I'm eating lunch or late in the afternoon. The majority of birds have been young (36). One of the ways we age them is by looking for tiny slash marks on the side of the bill. As the bird gets older the slash marks smooth out. If you double click on the picture you might be able to see what I'm talking about. 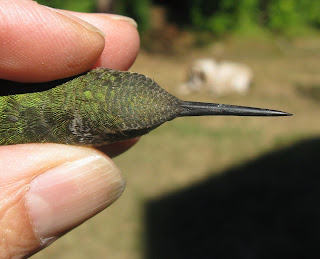 Females have a white throat with just a bit of greenish spotting. 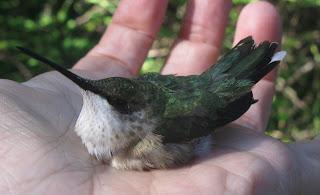 Before the HY males begin to molt, they will have darker green spotting on the throat and no  red gorget feathers. 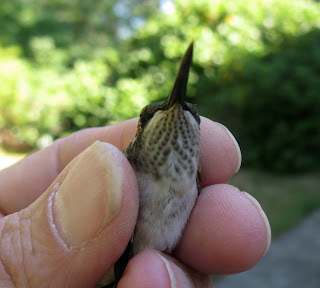 Males have shorter bills and wings than females, but we can also check the outer webbing of the 6th primary feather which is almost non-existent in males as below. 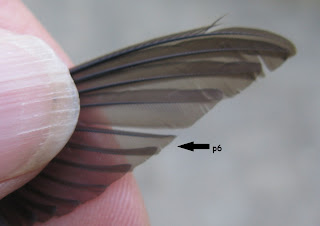 As time passes the males start to develop red gorget feathers, first one 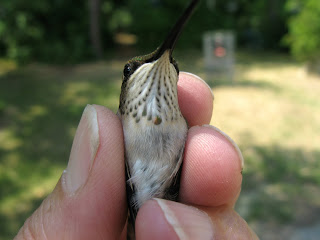 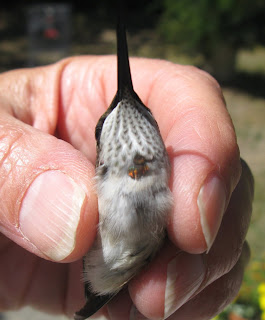 then as an adult they have a full gorget. This happens to be a male going through his annual molt, but his feathers appear more orange. The question is will this bird molt again on his wintering grounds and come back with a red gorget? Hopefully I'll catch him again next year! I also had one adult male return that was banded 3 years ago. 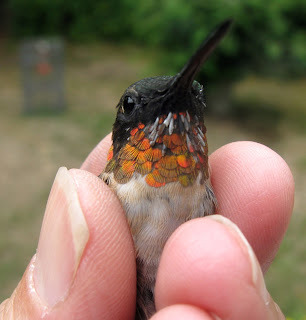