During the winter of 2012-2013 there was an influx of both Red and White-winged Crossbills on Cape Cod. By late spring many birds were still visiting feeders. Keenan Yakola and I decided to see if there was any evidence of breeding in these species by capturing them at feeders.

On the afternoon of  May 20th we visited a home in Wellfleet where the homeowner had been seeing crossbills for many months. He allowed us to set up a net and we captured two White-winged Crossbills, a third Red Crossbill escaped.

I have barely seen these birds in the wild and never banded them before so I have no experience in ageing them. I would appreciate any help from banders with more experience! From what I understand they can breed in all months of the year, providing there are ample food sources, so juveniles can be present all year. My first thought was that the bird below on the right may be an juvenile female due to the mostly brown, streaked plumage with just a touch of a yellow wash. (Click on any photo for a closer view). 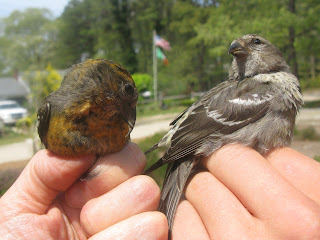 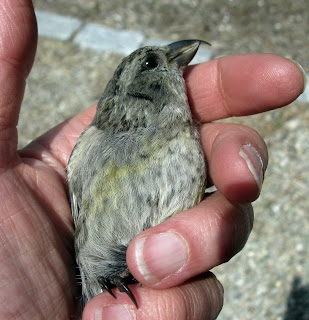 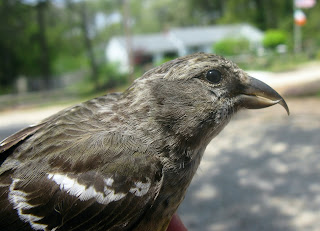 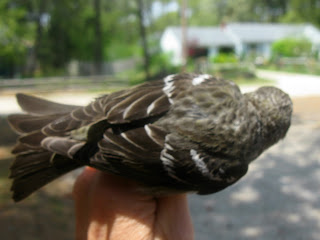 However, the wing feathers appeared uniform and fresh and seemed more like adult feathers, leading me to think ASY, but there was no greenish, yellowish, or reddish edging to the primary coverts as the literature suggests. I saw no molt limits in the greater coverts. On the other hand the white tips to the greater coverts were no where near as distinct as the male (directly below), but maybe this is sex related or is this bird a juvenile who has not yet molted into formative plumage? 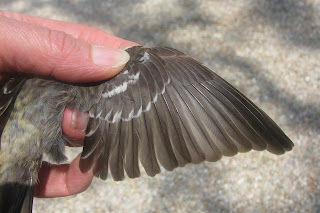 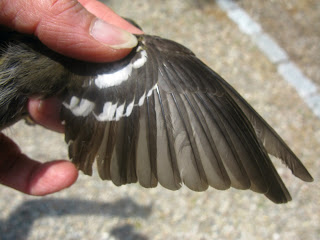 The male had a visible molt limit in the secondaries having retained ss4-7, but since molt limits can occur in AHY/ASYs I'm not sure if this bird is a SY or ASY. The replaced flight feathers appear to have no reddish edging. 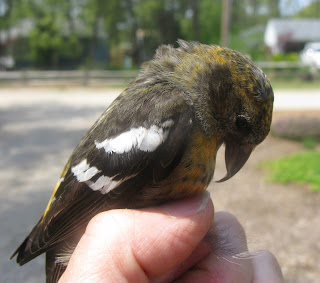 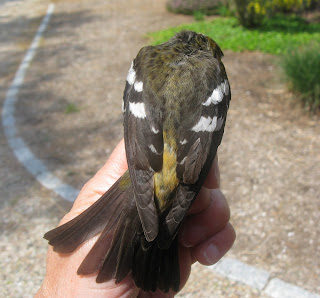 We saw no evidence of breeding in either bird and neither bird had any fat to speak of.
I heard back from Peter Pyle after posting this blog and here is his response about ageing these birds:
"These are the most-complex and  least-understood passerines for molt/ageing in NA.

The female WWCR seems to have molt limits in the tertials, but what this means - I don't know. Agree the rest of the wing and tail feathers look like they have been replaced - note the cline toward
fresher primaries from inner to outer, indicating a molt. If so it's an ASY, which is what I think it is, despite the brown plumage (no carotenoids in the diet around during last molt?)

The male WWCR I'd call an SY or TY. I think the s4-s7 are juvenal (as is p10?). So in a normal species I'd say TY but this could also be an SY from early last year that has already undergone most of it's molt and has suspended or arrested. In Part 2 I have code "S-TY" which is what I'd call it, but I don't know what Id' put to the BBL (AHY?). "

We tried again for crossbills on May 25th, this time at a feeder in Eastham where Red Crossbills had been seen most of the winter going to a rather large thistle feeder. We set up our net in late afternoon having banded on Wing Island in the morning. 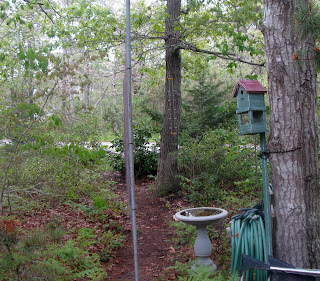 Keenan has amazing hearing and could hear the crossbills making their way towards our direction. Our waiting paid off as they came to the feeder. Unfortunately we only captured one bird, but he was a beauty! 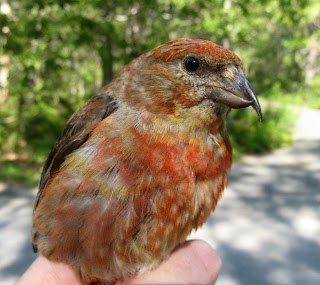 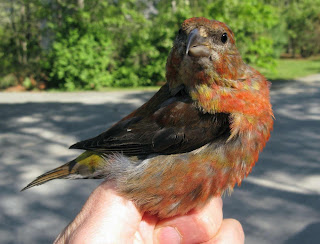 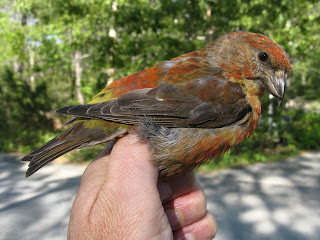 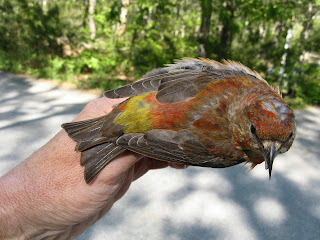 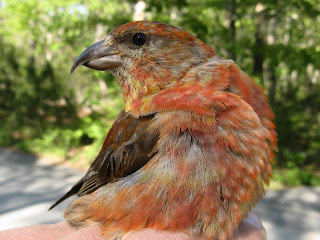 Again I'm having difficulty assigning the proper age code to him. His secondaries are retained and the first 2 primaries replaced. I know he isn't a HY and most likely not a SY due to the corresponding pcov replacement, so I guess I will have to go with ASY as they can have molt limits too and not age him a TY, since according to Pyle only 6% can be safely identified as such. Any comments are greatly appreciated.
Again Peter Pyle's response:
I'd be comfortable calling the RECR an ASY. It has begun the next molt with p1-p2 and the tertials and then suspended it. You can also  see clines in the older primaries, and the (old) red body plumage is  good for ASY. 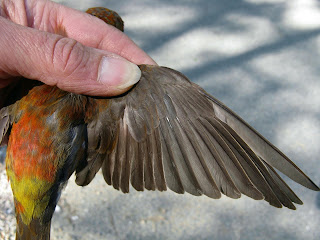 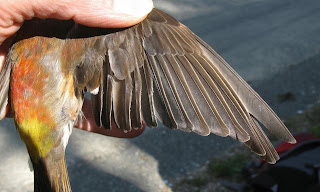 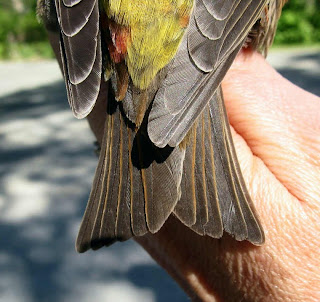 Keenan is checking out the trees for any more crossbills. 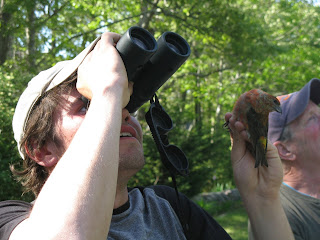 This bird did not present with any evidence of breeding but was bulging with fat. As I expected a few days later they were no longer seen at the feeder. Off to greener pastures!

It's pretty cool when the guy who literally wrote the book on how to age birds using molt answers your questions!!!

Yes, I was hoping Peter would chime in!!