I am very late at posting our last month of banding, but better late than never. With the mild fall weather we were able to band nine days in November with our last day on the 26th. Our first Fox Sparrow came in on the 1st. Some years we miss this species especially if bad weather forces us to shut down early. We banded 3 of them, all HY's. 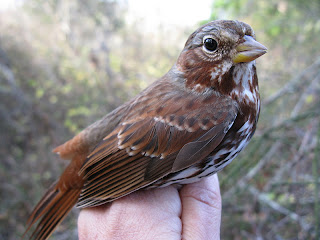 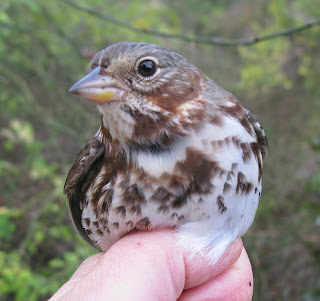 We were quite surprised to find a Baltimore Oriole in our nets on the 2nd, this is the latest date ever for our site, she stayed around for a few days. 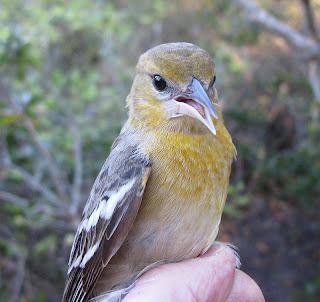 We aged her HY, the molt limit visible in her greater coverts with her 3 inner coverts replaced. 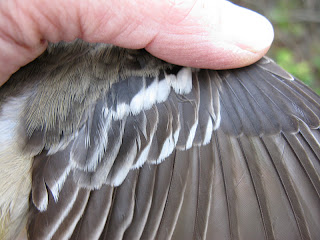 We didn't get out in the field again until the 6th and captured our 3rd Yellow-shafted Flicker for the year. 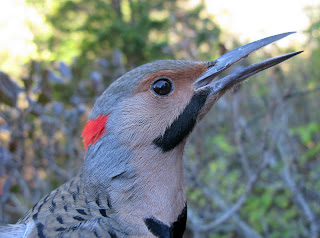 We conservatively aged him as ASY, but made notes on the molt limits we observed in the primary coverts. The two inner pcovs appeared to be 2nd generation, the 3 inner pcovs looked juvenal, and the remaining outer pcovs replaced this year. 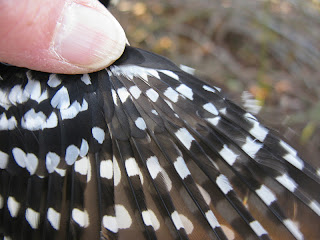 We ended our season banding 71 Swamp Sparrows, all in the fall and 99% HY. As I've said before the majority of our Swampies have yellowish lores, but I've heard from other banders in different areas that they don't observe this in their HY birds. I took a photo of two SWSP's with the typical range we see in the lores of our birds, but some are quite yellow. I'd be interested to hear from other banders if they see the same coloring. 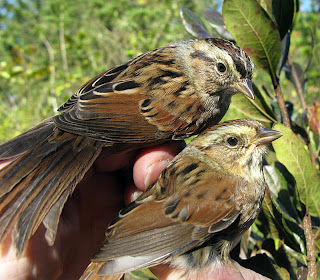 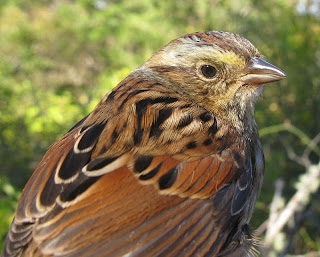 and on the 7th 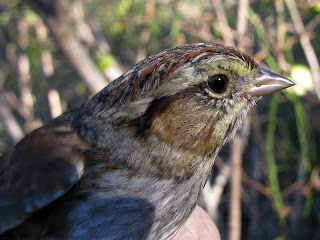 We banded our 2nd Marsh Wren of the year on November 6th. 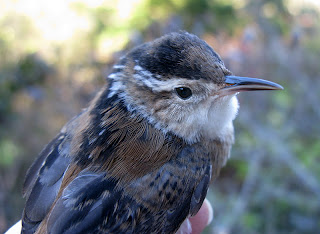 Another latest record for us was this female HY Eastern Towhee banded on the 13th. 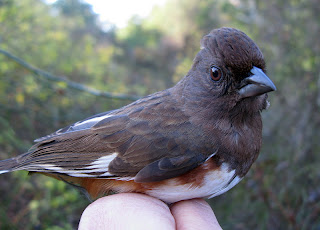 We also captured our 3rd and final House Sparrow, an unknown male on the same day. 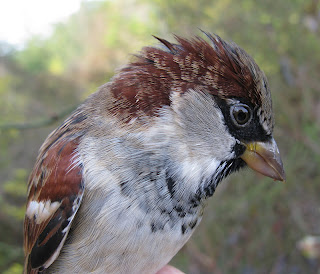 Many years we don't band this species, but I was very happy when Jo-Anna brought back our one and only American Tree Sparrow with it's bi-colored bill  from her net run on the 19th. 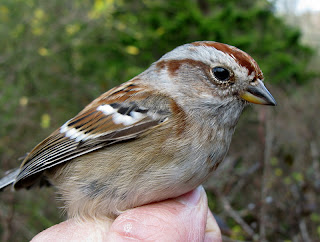 We banded our remaining two Fox Sparrows also on the 19th, such handsome birds! 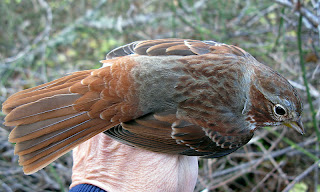 A call came in about a possible Rufous Hummingbird so I headed out to Wareham on the 20th to try to entice it into the trap. I typically capture hummingbirds soon after setting up the trap but I waited hours for this one. Little did I know that the homeowner put out another feeder in the front of the house after I set up my trap. Once I was able to convince her that the little one wouldn't starve, she took it down and the bird flew right into the trap. 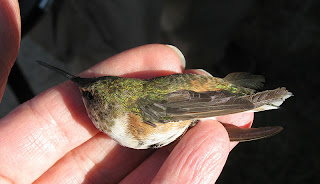 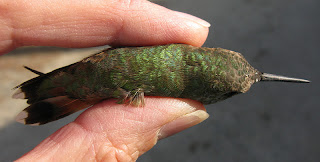 Her long wing indicated female and while she had some gunk on her bill obscuring my view, it appeared to have some striations beyond the base (indicating HY) but at least 70% of the bill was smooth. Allen's Hummingbird was ruled out because of the wide outer tail feather and shape of the 2nd tail feather. She was missing both central rectrices. 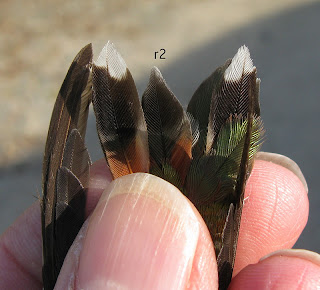 Her orange gorget feathers centered around the midline of the throat. 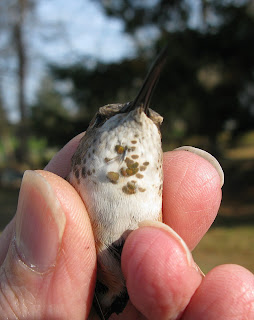 After all the measurements were taken, the homeowner was delighted to release her. 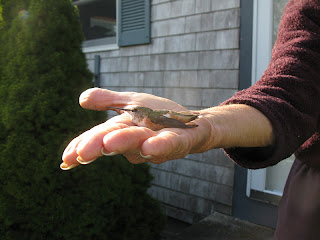 I know she came back after banding, but I haven't heard if and when she finally left.
Our last day of banding on the island was the 26th. ﻿A slow day with only 22 birds, seven of those were Myrtle Warblers  making this year's total 501. They sure were late this year! 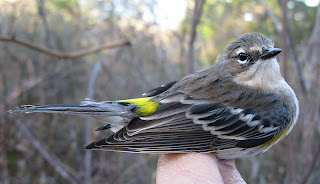 We also handled 3 recap Black-capped Chickadees, one was first banded in 2008, 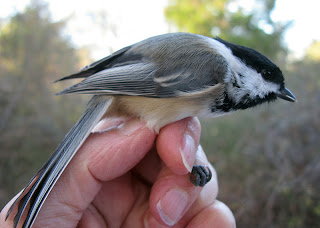 another HY Hermit Thrush bringing our year total to 18, our highest number ever, 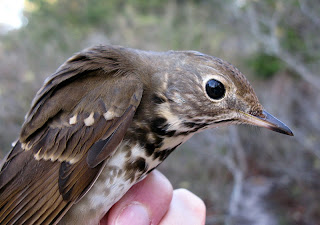 White-throated Sparrows (below), a Carolina Wren, and 4 Song Sparrows. 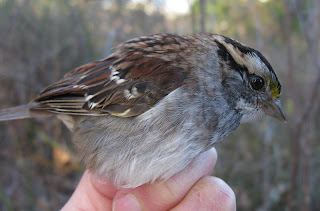 We celebrated our last day with homemade goodies and  Mimosas when we finished banding. ﻿A very enjoyable day! Many thanks to all who helped out in November; Jo-Anna Ghadban, Gretchen Putonen, Becca Miller, Judith Bruce, Carolyn Kennedy, Juliet Lamb, and her boyfriend, Yvan. 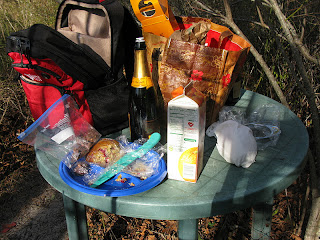 All in all, we had a total of 94 banding days compared with 78 last year. Nets were open for a total of 10,630 net-hours. 4,460 birds were netted giving us an average of 42 birds/100 net-hrs. Birds banded totaled 3,015 individuals.
1311 birds were recaptured during the season. The majority were from 2011, but 200 were birds returning from previous years. Three birds were 9 years old or older; a Blue Jay, Gray Catbird, and Black-capped Chickadee. Five birds were 8 years or older; an American Goldfinch, two Common Yellowthroats, a Prairie Warbler, and Song Sparrow. Two American Goldfinches, three Common Yellowthroats, and two Northern Cardinals were at least 7 years old. Two birds were at least 6 years old; a Slate-colored Junco and a Song Sparrow. We had ten birds at least 5 years old, twenty-three at least 4 years old, and twenty-eight were 3 years old or older. The remaining returns were 1 and 2 year old birds.


The banding program wouldn’t run without the help of our volunteers.  Huge thanks goes to all who helped out this year: Jo-Anna Ghadban (262 hrs), bander Gretchen Putonen (180 hrs), bander Carolyn Kennedy (87 hrs), Judith Bruce (71.8 hrs), Ornithologist Juliet Lamb (58.5), Jessica Rempel (28 hrs), Becca Miller (26 hrs), and Judy Keller (25 hrs). Thanks also go to the following people who helped out at various times this season; Stew & Margo Goodwin, Sheryl, Lauren and Kristen Johnson, Suzanne Faith, Juliet’s boyfriend Yvan, Judy Fenwick, visiting banders Mike Quinlan, James Junta and his assistant Mike, plus a few others that helped out for a day.  A big thank-you to Jan Veneto who made us 150 absolutely beautiful, functional bird bags!
Can't wait for next season!