Tropical Storm Irene hit Cape Cod on Sunday 28 August. I was hoping to band the next day possibly capturing a species not typically found in our area, but instead spent four hours alone that morning resetting nets and cleaning up debris. We set our nets low the day before the storm hoping they wouldn’t get blown around too much. Luckily the nets were in good shape but it took forever to clean out the small bits of debris out of them and pick up branches cluttering the net lanes.

The week produced few migrants for September. I imagine the 3 storms- Irene, Katia, and Lee had some influence keeping them away from our little spot on the cape. Our first Pine Warbler for the fall season, most likely born on the island, came in on the 30th. I didn’t have my camera that day so Jo-Anna graciously forwarded her picture of the Pine to me, a HY female. 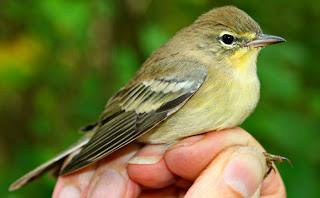 We handled 73 birds that day, including another Yellow-breasted Chat , Red-eyed Vireos, and Yellow Warblers, plus our usual suspects,  more than half being Gray Catbirds.

Our fourth Northern Waterthrush was banded on 1 September. 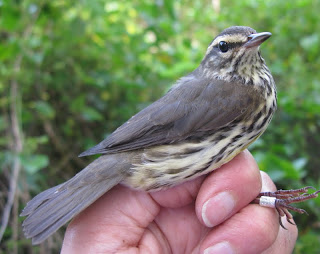 This bird had a nice example of rusty tertial edges (those three feathers closest to the body) evident on juveniles. 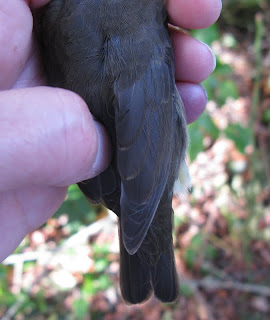 Our first Warbling Vireo for the year arrived too. They have a less distinct facial pattern compared to Philadelphia Vireos 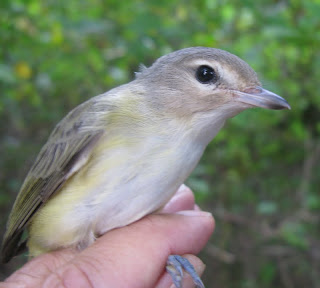 and the contrast of color between the head and back is duller. 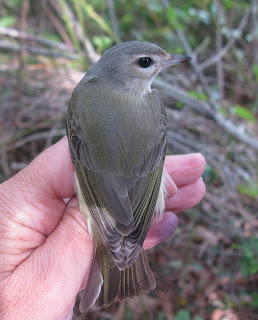 For good measure we checked the outermost primary feather (p10) and sure enough it was approximately the same length as the primary coverts, which is barely visible in the Philadelphia Vireo. 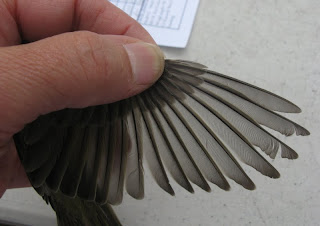 Three Baltimore Orioles were banded on the 2nd, a beautiful adult male 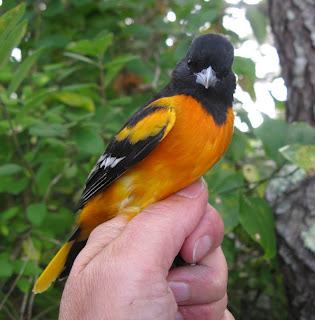 and 2 juvenile males. After their first prebasic molts, young males have orange-edged lesser and median coverts seen in the photo below. 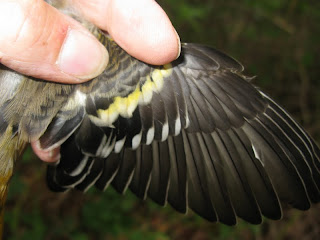 This male had also molted its inner greater coverts, retaining the outer four along with molting the uppermost tertial feather (s9). 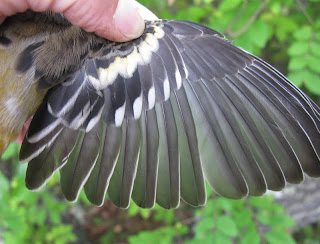 This young male was trying his darnedest to pry open my fingers holding his legs. 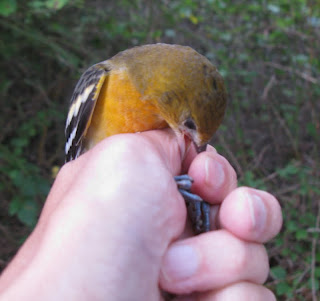 An Eastern Phoebes was captured this week, still in full juvenal plumage with none of the buff-edged greater coverts replaced. 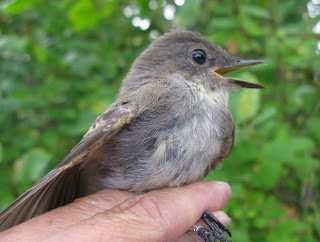 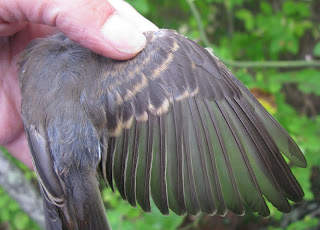 We picked up a young male Hairy Woodpecker going through his first prebasic molt. Red feathers were still present on top of his head, but a few new red body feathers were emerging on the back of his head. 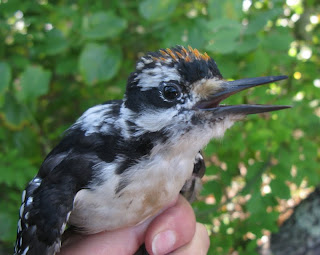 He was busy replacing his primaries, but like other woodpeckers during their first prebasic molt, his primary coverts were retained with the outermost primary (p10) extending well beyond the primary coverts. 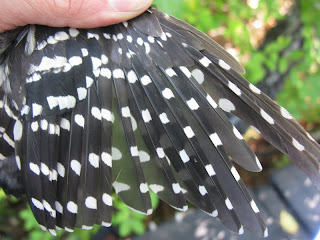 A Downy Woodpecker was also captured, this time a SY (second year) male going through his molt. He was replacing his primaries and his outer primary coverts, 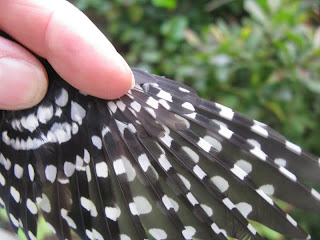 plus his secondaries (with a browner middle secondary retained). 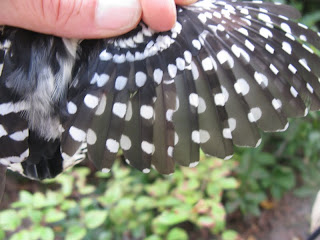 His inner primary coverts will be replaced during his molt the following year, with an occasional primary covert or two possibly retained then.

This unfortunate Gray Catbird was born with a deformed bill. 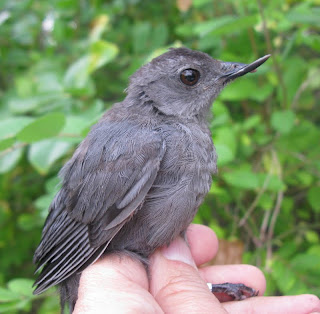 The upper mandible was askew making it difficult for the young bird to eat although the weight was within normal limits. 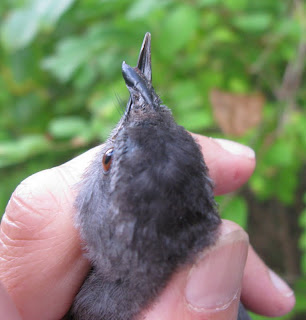 Many of the primaries were also either broken off or malformed while growing. 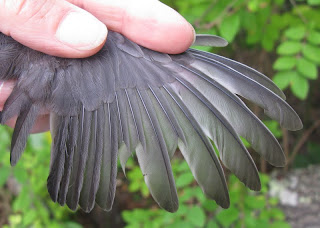 3 September brought in our first Blackpoll Warbler, an adult female. 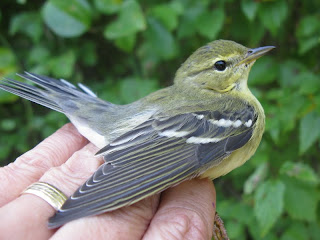 A first year House Wren, still in full juvenal plumage was almost as wriggly in the hand as it’s cousin the Carolina Wren. 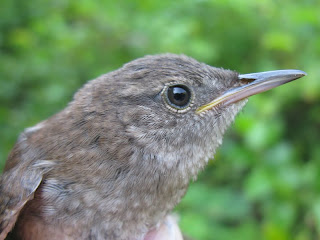 The barring on the wing lining up in neat rows is an easy indicator that it had yet to begin it’s molt. 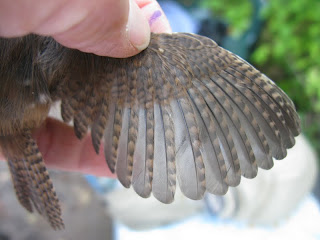 Another Traill’s Flycatcher was captured on the 5th 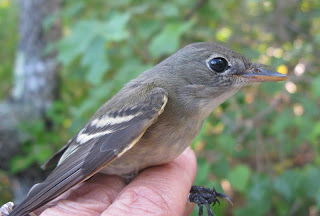 and we are starting to get numerous HY American Goldfinch with the first one banded on 30 Aug. 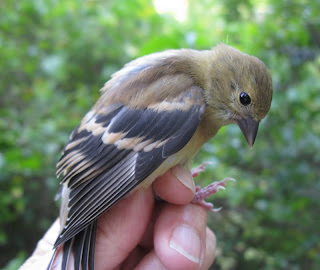 Thanks to Judith Bruce, Jo-Anna Ghadban, Gretchen Putonen, and Jessica Rempel for helping this week. We were also lucky enough to have visiting banders James Junta and Mike help us out on the 5th.

The following birds were captured (with numbers), seen, or heard during this past week.